As anyone of a certain age will know, one of the Leftist tropes of the Vietnam War was the statement: “We had to destroy the village in order to save it.”  (Yes, I know those weren’t the major’s actual words, but that was what they became, thanks to that bastard Peter Arnett and the rest of the Leftist Anti-War School of Journalism.)  It is the expression which draws the glee of the Left because of its apparent paradox.

My, my, how times have changed.  In reading this article, I was struck by how the Left (in the persona of Bill Maher, but I bet he isn’t the only one) has come to adopt this trope as its own.  Think I’m kidding?  Try this:

Bill Maher, high priest of the Smart Set, despises the working class for its rejection of Hillary Clinton. On his June 8, 2018 broadcast, he hoped that the economy “crashes” so Trump will lose in 2020. Maher’s misanthropy is instructive. As Americans find their footing in a much improved labor market, Maher roots for disaster: lost jobs, lost health insurance, lost homes, aborted college educations, divorces, more opioid deaths.

In rooting for disaster, Maher is suggesting that there is salvation in Trump losing, and he doesn’t care how many Americans lose their jobs.

So in other words: he’s prepared to destroy the village in order to “save” it.

Of course, nobody should be surprised at any kind of inconsistency from the Left:  if the aim is gaining power, all can be excused — lies, lawbreaking, inconsistency, destruction of long-established institutions, whatever.

Here’s the thing, though.  In all the historic instances of the Left actually seizing total power, they always first made sure that they were the ones who had the guns — whether it was the mutinous Russian Army of 1917 which helped the Bolsheviks, the Wehrmacht and SS of Nazi Germany or the murderous Khmer Rouge death squads (to name but some).

That’s not the case here in our America, is it?  In fact, the American Left is the side without any guns, which is why they’ve taken great pains to politicize and weaponize government departments which do have guns (the IRS, the CIA, the FBI, etc.) who can oppress and terrorize the Left’s opponents (instead of “enemies foreign and domestic” — an easy thing to do once you’ve demonized your opposition and turned them into the enemy).  Which is also why the Left is the party of civilian disarmament:  despite their lying protestations to the contrary, they do want to take our guns away from us.  Makes it easier for all those Alphabet Agencies, doesn’t it?

I think that’s why I love this meme: 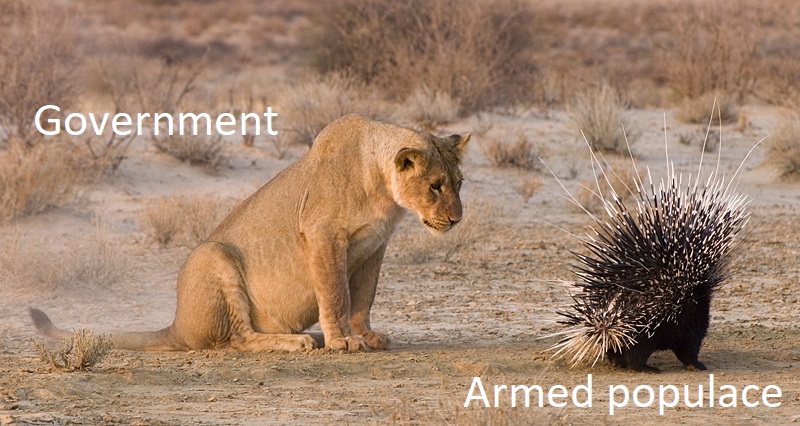 Make no mistake about it:  the lion has a very good chance of killing and eating the porcupine — eventually — but at great, perhaps even lethal cost to itself.  Now imagine another porcupine with no quills at all;  as the lion, which one would you rather tackle?

And now, if you’ll excuse me, I’m off to the range.  My AK- and 1911 quills aren’t going to sharpen themselves, you know.