Over at Shooting Times, Rick Mann looks at what he considers to be the four best SHTF rifles — what he terms “Apocalypse-Ready Rifles” — and has devised a test to determine which one is best.

I’m not going to pick holes in his test — it seems quite adequate — and I actually agree with his rationale (e.g. “Granted, cataclysmic conditions of ruin can run the gambit from a camping trip gone bad to total anarchy.” )

As I’m unlikely ever to go on any camping trip which doesn’t include the words “Holiday Inn”, I’m not going to pick two of his choices (the .30-30 lever rifle and the .308 Win boltie), fine weapons though they may be.  No, from where I’m sitting, the most likely scenario is civil breakdown and disorder caused by natural disasters (which could likely cause prolonged power outages, food shortages and such), or else a truly bad situation like a BLM- / Antifa-inspired riot.  In both cases, what’s needed is something for home / property defense (if caught in a riot), and something which would also allow me to do things like pay a visit to a local supermarket for a little un-monetized food collection (the fancy term for looting).

Well, you all know my first choice:

…and if I ever wanted to get fancy, I could always improve the crappy iron sights on the AK with some kind of red-dot sighting apparatus, thus:

I know, some people are going to prefer the Waffen Durch Plastik  AR-15, and while I deplore the choice (I mean, all that plastic… think of the environment, people!), I’ve come to the point of view that you go with what you feel comfortable using — and as most gunnies of my acquaintance have served in the dot.mil (e.g. Doc Russia, Combat Controller etc.), the AR would be a logical choice for them. 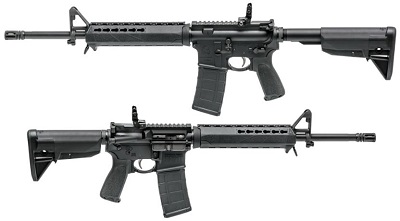 (Over The Pond, and following his service in the Paras, Mr. Free Market’s rifle of choice would no doubt  be the FN-FAL — or whatever the Brits called it — but sadly, H.M. Government says that the icky things are Just Too Dangerous or some such nonsense, so he’d have to be content with picking off fuzzy-wuzzies from his rooftop with his trusty Blaser R8 .300 Win Mag.  I for one would pay money to be able to watch that.)

Where was I?  Oh yes, the SHTF rifle choices.

I have to say that for my Readers who live in rural areas, where one could forage for dinner amidst the wild beasties who frolic in the fields, the .308 bolt rifle would be an outstanding choice — although I’d probably choose a .300 Win Mag chambering instead — and if the terrain is heavily wooded, the .30-30 lever rifle would be equally effective.

Mann’s observation about ammo is, I think, quite on the mark:

Sustainment for months is unlikely, so being able to “pick up” ammo—while potentially important—is not a realistic necessity. What’s more important is how much ammo you can comfortably carry.

Here’s my take:  outside the scenario of actual guerilla warfare (ain’t gonna happen, not in this country, Red Dawn fantasies notwithstanding), you aren’t going to run out of ammo.  Seriously, if you think you’re going to need more than a couple-three magazines for your rifle, what you need is not more ammo but more people to support you.  Myself, I could not see myself taking the AK for an outing with any more than two 20-round magazines.  Ammo is heavy, Bubba, and I’m not young and fit anymore.  More than two, and I’d keep them in the car instead.  The amount of ammo on hand is another story, of course, but you all know my “500” rule — a minimum of 500 rounds per  gun (with an exception for exotic calibers like .375 H&H or 7mm Jap).

All this is fun to wargame out, isn’t it?  Even though it is an unlikely scenario, I try not to wander too deep into the Gun Dork Forest, because that’s like drawing up a comprehensive financial plan for when you win the $100-million lottery:  fun, but after a certain point it’s just wasting time.

I do think, however, that some planning is not only necessary, it’s prudent.  You don’t want to be like those morons in New Orleans who, when Hurricane Katrina was about to come calling, arrived at the shelters carrying nothing but a Pepsi Big Gulp.  In a dire SHTF situation, my plan involves staying in place and defending the apartment.  If that’s untenable, then I’ll be loading my Grab ‘n Go* tubs, emergency water cans and the necessary guns and ammo into the Tiguan, and making my way over to Doc Russia’s house.

Call me unprepared if you will, but I’m not a dummy.

*Yes, I still have them, just with fresh supplies.  If anyone’s interested, I’ll post pics of them some other time, after I’ve moved.