So one of Wal-Mart’s satellite suppliers was selling “Impeach 45” (i.e. the 45th POTUS, Donald Trump) merchandise, but after some people started squealing, the Big W ordered the stuff pulled.

I have to say that I’m a little nonplussed by the fuss.  Frankly, I remember when a lot more “objectionable” stuff was sold — and still is, e.g. Che Guevara T-shirts — and the world got on just fine.  Even the satirical riffs on the revolting Obama’s “Hope” / “Dream”  logo could have been construed as objectionable, at least to liberals, Commies and Democrats [massive overlap] , but I don’t remember howls of outrage coming from them — and they are quite easily the most-easily-triggered population group ever (see MAGA caps, reaction to).

And I’ll probably get the “But it’s Wal-Mart that’s selling it!”, as though the stereotypical American retailer (with 90% of its inventory carrying a Made-in-China label) should somehow be above such objectionable merchandise.  (I note that the Emperor Misha’s excellent dictum — “Rope.  Tree.  Journalist.  Some Assembly Required.” —  was also pulled from being sold on a T-shirt, as though journalists should not be strung up weekly from lampposts, as commonsense would suggest.  Sheesh.)

But with all the shit that the Left is causing these days, a stupid call for impeachment (which ain’t gonna happen, no matter how many Impeach 45 T-shirts they sell) is small potatoes.  Far more problematic is [list of 2,000 Lefty-loony actions omitted, for space reasons] .

Let’s face it:  we as a nation have a long and proud tradition of using T-shirts, pamphlets and bumper stickers to get under the other guy’s skin and up his nose.  And I’m enough of a capitalist to believe that as long as there’s a market, people should be able to make a buck from it, regardless of offense taken.

Here’s my suggestion for a T-shirt logo which broadens Misha’s thought somewhat: 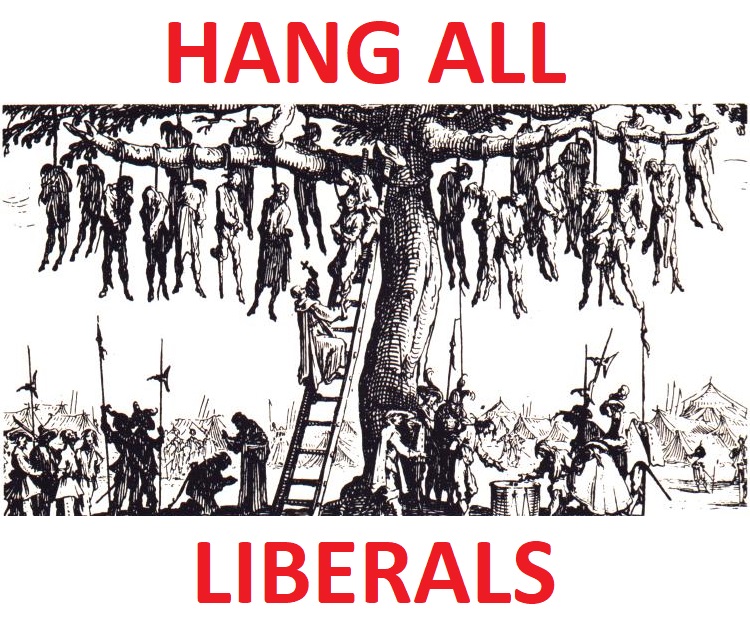 Think I could get Target to carry it?