As we all know, some mope got into a van and drove down a sidewalk in Toronto, killing some folks. Then, when stopped and surrounded by cop cars, he jumped out of his van and pleaded with the cops to kill him. This is what it looked like: 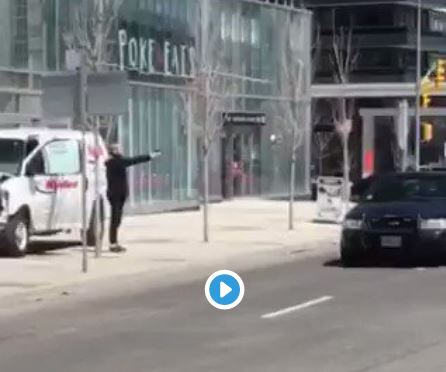 So far, so good… or so one would have thought. The next few seconds should have been full of hundreds of cop bullets hitting this little shit, and him falling dead to the ground, right?

Nope. Instead of killing the fucker, the cops (I guess because they’re Canadians and therefore gentle souls) managed to pull him to the ground, cuffing him and saving his life.

Now he’s going to stand trial, and apparently his motivation for the crime will be that he couldn’t get women to sleep with him because he’s a schlub (in the parlance of the day, he’s “involuntarily celibate”, or an “incel”). As though that could ever excuse his crime.

Well, fuck that. Way I see it, the cops are guilty of a public disservice here. If someone commits a very obvious crime and then wants the cops to kill him, they should grant the man his wish and shoot the bastard dead on the spot. We’re spared all the angst that follows, justice is done and we can all go back to our lives without having to listen to how and why his soul was so tortured that he was driven to commit crime, etc. etc. etc. boo fucking hoo.

Vermin need to be summarily exterminated, and this asshole definitely qualifies.

A tangential thought:  having seen Toronto women on the several visits I’ve paid there, I think this mope is lucky that none of them wanted to sleep with him. To me, young Toronto women look like ur-feminists of the worst type: badly-dressed, self-obsessed and rude, almost all of them are Career Grrls, hence unworthy of the attention of any man of taste and discrimination.