So Viktor Orban is being painted as some kind of fascist / racist / [insert liberal epithet du jour here] because he’s not in favor of allowing his country to be swamped with foreign “refugees”, saying for example:

Hungary’s controversial Prime Minister has said refugees arriving in Europe are “Muslim invaders” who have created “parallel societies that will never unite”.

Yeah, well he’s right about that. Muslims don’t assimilate, they aren’t willing to FIFO (fit in or fuck off) and they do want to impose their backward fucking belief system on all of us. And yes, I know: Not All Muslims Are Like That — right up until they form a sizable minority (+25% or so) within their host population, whereupon the shit hits the fan and it’s shari’a-shari’a-shari’a; in other words, honor killings, murder of apostates, barbaric treatment of women and all the other revolting little items from the Islamic playbook.

He claimed that most refugees were not fleeing to Europe to escape danger, but rather were “economic migrants in search of a better life.”

Well, that’s true as well, isn’t it? As a one-time economic migrant myself (albeit a legal one, unlike most of these fuckers), I can sympathize with their plight and desire to improve their miserable Third-World lives — just don’t claim to be political refugees fleeing persecution because you aren’t, mostly. If these shitbirds were truly set on improving their lot in life, they’d assimilate into their host countries and become economically viable citizens — but they don’t, of course. They live in refugee camps, take welfare handouts and create rape-gangs.

But Orban’s most telling statement is this one:

“I can only speak for the Hungarian people, and they don’t want any migration.”

Lest we forget, Orban is the democratically-elected prime minister of a sovereign nation and given that in a few months he’s going to be reelected to office in a landslide (you read it here first), he’s telling the truth — and to ignore the wishes of his voters (as former Ossi-Commie Angela Merkel has done and still does in Germany) would constitute the grossest betrayal of his people’s wishes.

And speaking of Germany, Orban has this to say:

“The reason why people are in your country is not because they are refugees, but because they want a German life.
“I’ve never understood how chaos, anarchy and illegal border crossings are viewed as something good in a country like Germany, which we view as the best example of discipline and the rule of law.
Asked to explain why Hungary accepted no refugees while Germany took in hundreds of thousands, Orban told Bild: “The difference is, you wanted the migrants, and we didn’t.”

No wonder the Euros hate him: he speaks the truth, he speaks his mind, and he represents the wishes of his people, instead of spouting feelgood liberal pablum and ignoring the voters’ concerns — which is about as succinct a description of the European Union ruling elite as I can come up with.

I think The Donald should invite both Viktor Orban and his Polish counterpart Mateusz Morawiecki (who is cut from the same cloth and is likewise loathed by the EU goblins) to a state dinner at the White House. That will do several things: stick one in the eye of the EU (always a good thing, in my opinion) and reinforce Trump’s own bona fides in the matter of bogus refugees and illegal immigrants.

Mostly, though, Trump should invite Orban over because I think we could learn at least one thing from the Hungarians: 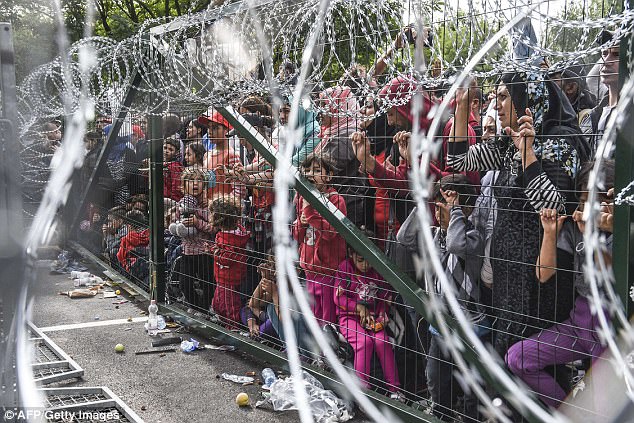 Seems to be working quite well, from all accounts.