So last night I spent the evening with The Englishman and Reader John M., doing pints of 6X, plates of fish & chips and in general doing what I’ve become accustomed to doing of a Friday night, with the usual consequences.

However, my trip back to Free Market Towers was by a different route because of road construction on the normal one. That I got back at all was a miracle, because The Englishman’s sole directions were:
“When you get out of the village, turn right till you get to the main road; then turn right, and keep turning right until you get back to Devizes.”
Reader John’s suggestion was equally helpful: “Watch out for some of the corners.”

Okay: a trip in pitch darkness along unfamiliar, narrow country roads, no map/GPS, half-inebriated. As it happened, both sets of instructions were brilliant, because I drove straight home without getting lost once. (That might be the first time ever, along a strange country road in Hardy Country.)

At Free Market Towers I encountered Mr. FM, back from a few days’ hard work of evicting widows from their ancestral homes followed by demolition of the latter and construction of glass-walled skyscrapers in their place. (I think that’s what he does for a living, but there’s also some terrorizing of subordinates and glad-handing of Chinese tycoons in there, so I can’t be exactly sure.)

Anyway, I was greeted with a glass of whisky and the words: “We leave at 10 tomorrow. Okay?”

I had forgotten, in my evening’s carousing, that he’d scheduled a day’s shooting for today. Oy.

So this morning I woke up, only mildly hung over, and off we set off in the Range Rover, along the standard leafy lanes of outstanding beauty and vistas of… oh hell, you know the rest. 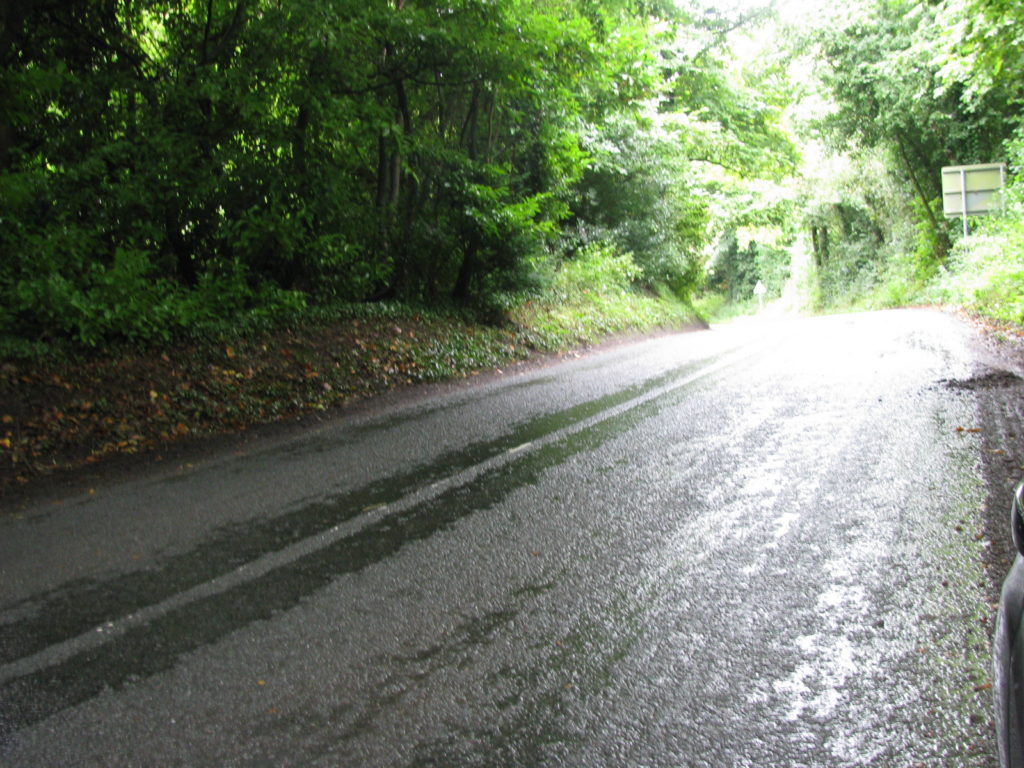 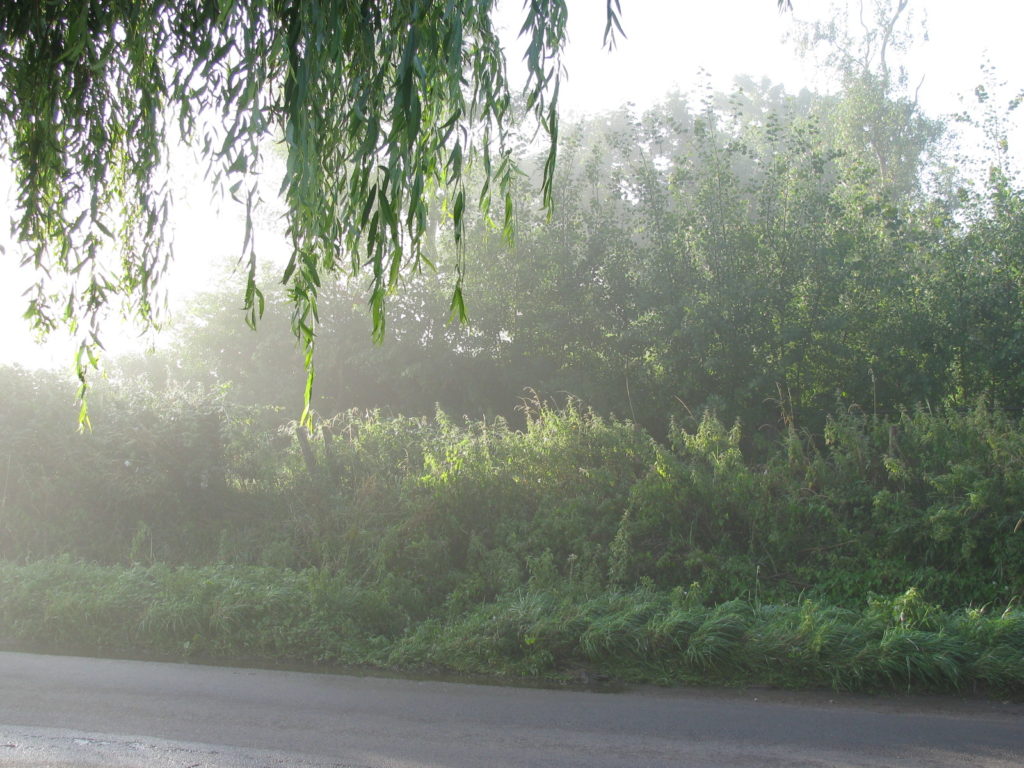 On and on we went, through various counties, villages and towns until we finally arrived at our destination: 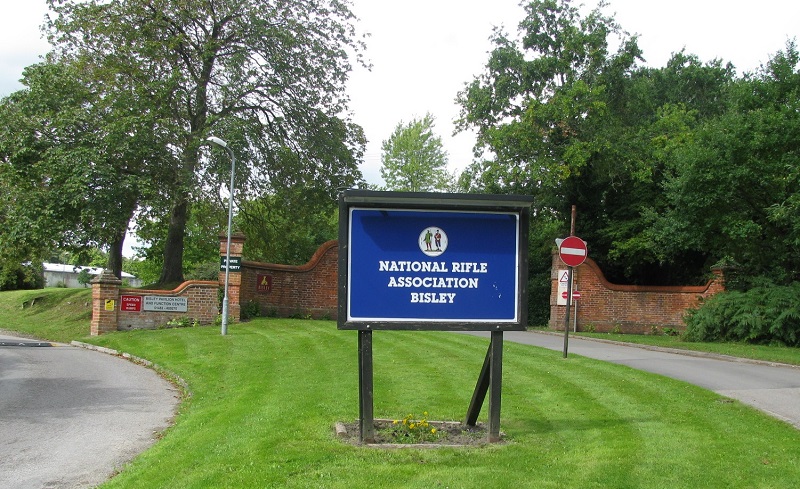 I’ve never been to Bisley before, and I didn’t really know what to expect. What I never expected was to find myself in a massive area (several thousand acres, Mr. FM estimates) devoted entirely to shooting. In other words, Kim’s idea of heaven. To give you an idea of the extent of the place, here’s a map which shows most (but not all) of the ranges and buildings (open in a new window to get the full-sized pic): 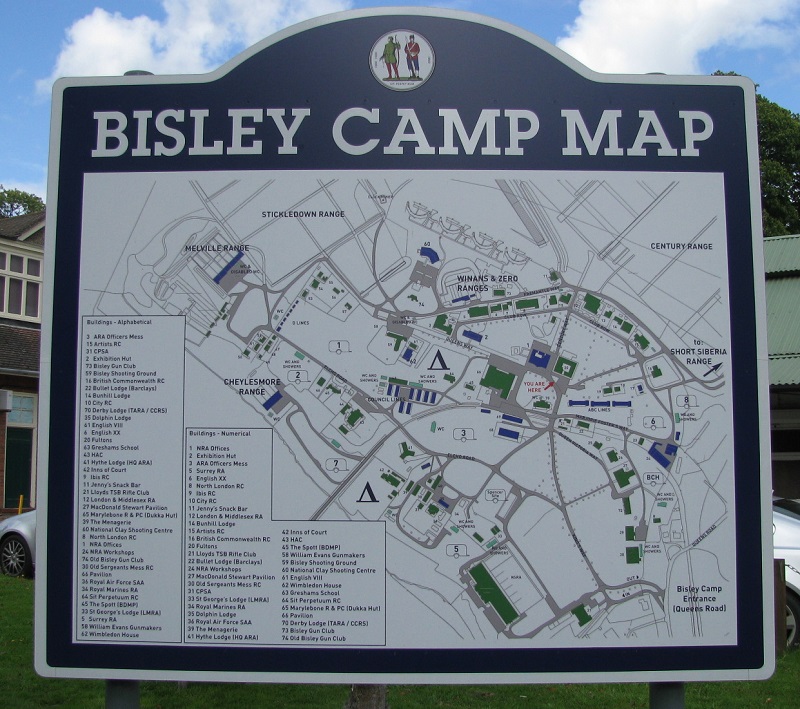 The problem, of course, is that Bisley isn’t open to just anyone — you can’t just stroll in there and ask to be given a slot on any of the ranges: oh no, that wouldn’t be British. Instead, you have to belong to a shooting club (approved by the Home Office, don’t get me started), and they will then schedule you a day, time and slot where you can shoot with other members of your club. Being British, of course, each club has an exclusive club house of varying degrees of grandeur, starting from 1930s-era Kenya-style mansions:

…and Shanghai-type establishments of the same vintage: 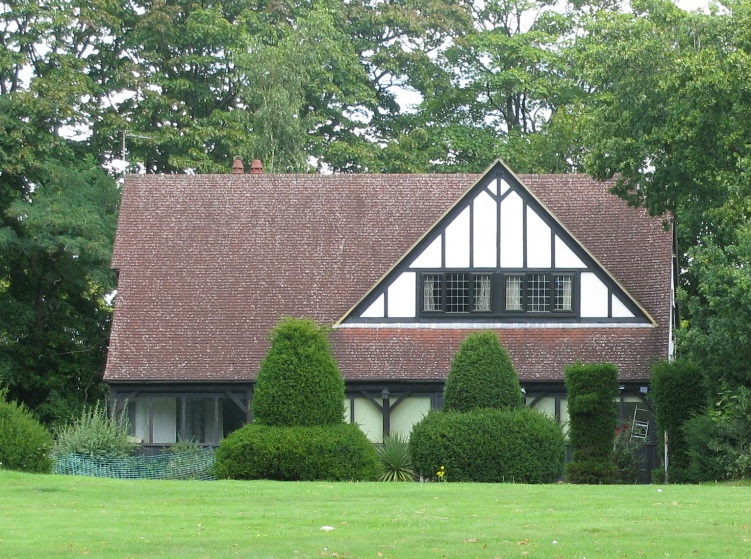 …all the way down to modest cottages:

…and there are even rental trailer-homes where one can spend the night if doing more than a day’s shooting: 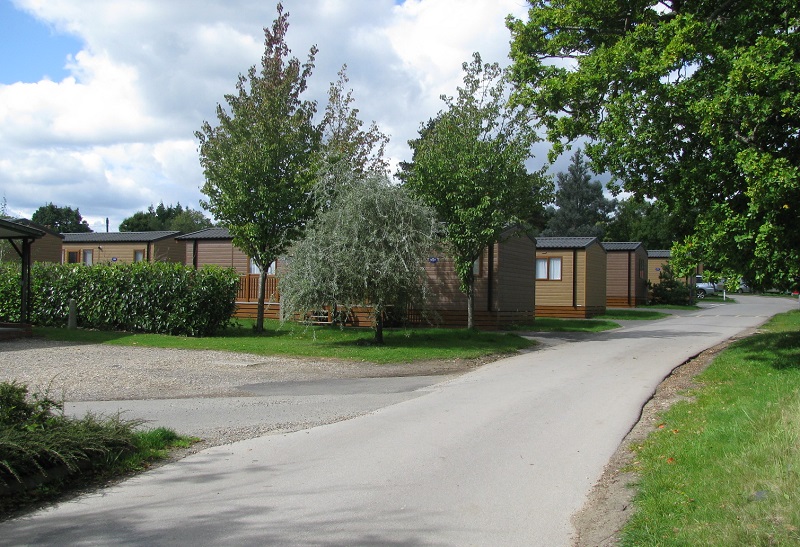 Bisley is almost, in fact, a self-contained town — hence the title of this post. There are restaurants, parks and, of course, gunsmiths/shops such as Fulton & Son and William Evans: 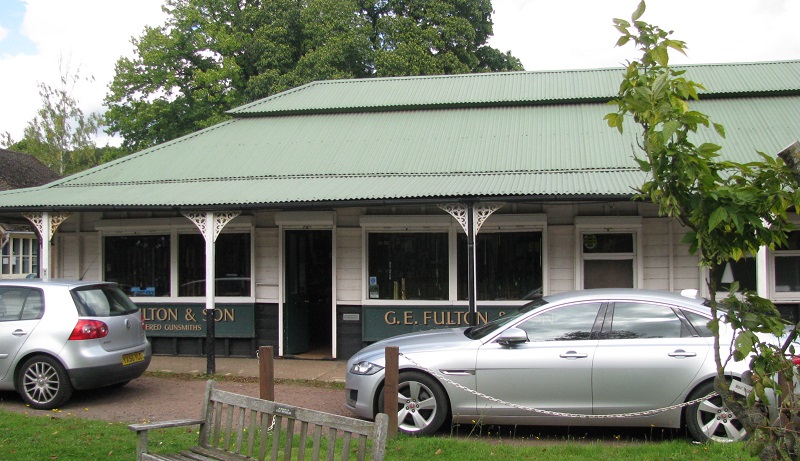 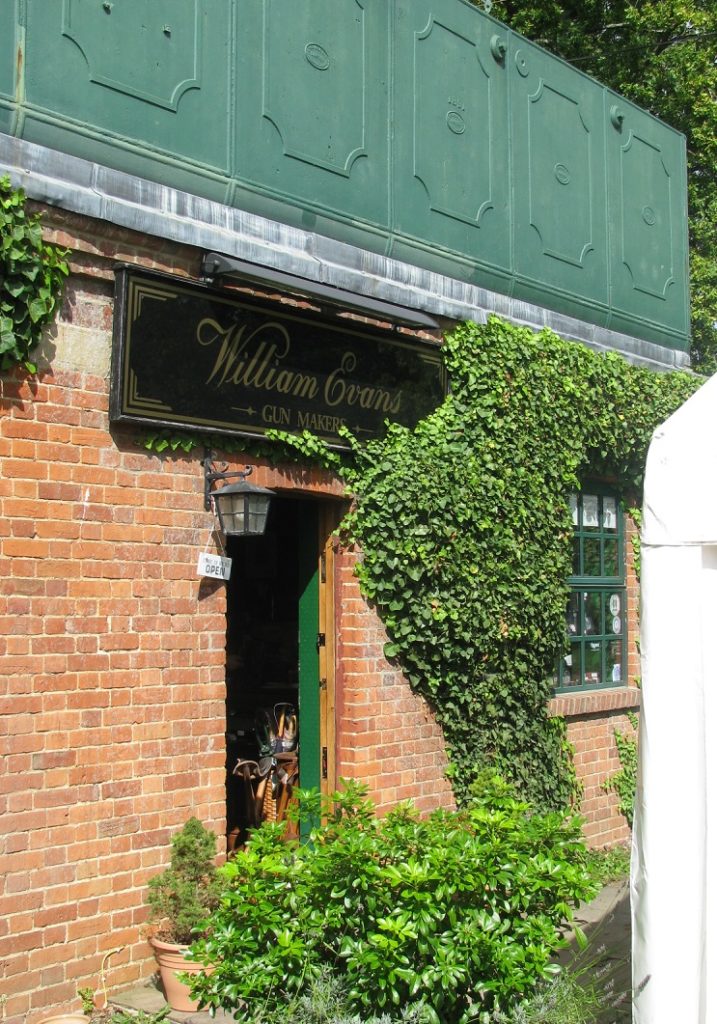 …which contain the usual items of gunny exquisiteness: 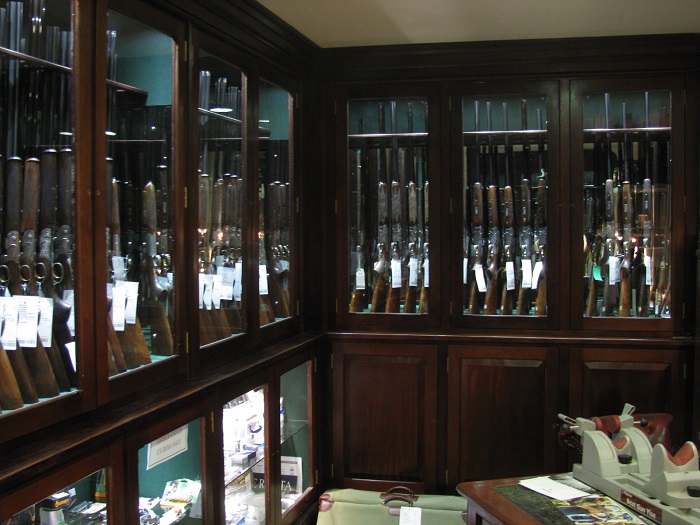 But on to the ranges. 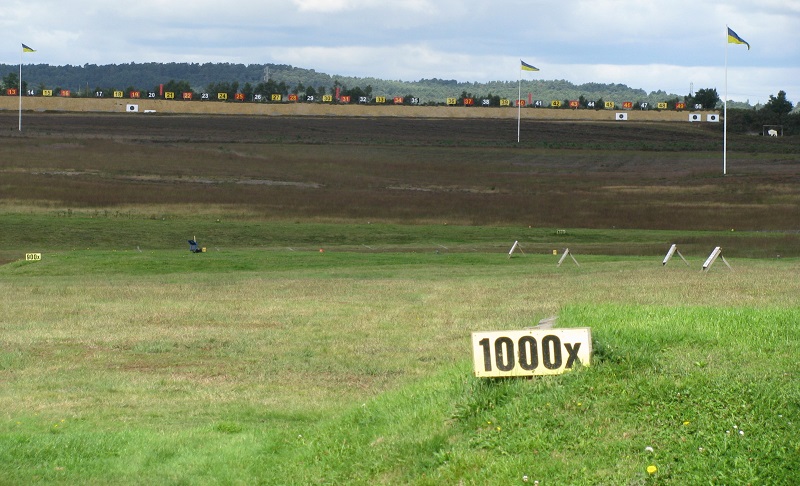 There are .22 ranges, medium-distance ranges, Olympic-distance ranges, shotgun ranges, and so on — all over the place, and all of which made a certain visitor’s trigger finger itch. Which is why after a quick lunch of bacon-and-egg sandwiches, Mr. Free Market took us off to where we would be doing our shooting — clay pigeons, as it turned out. Here’s the road we drove down: 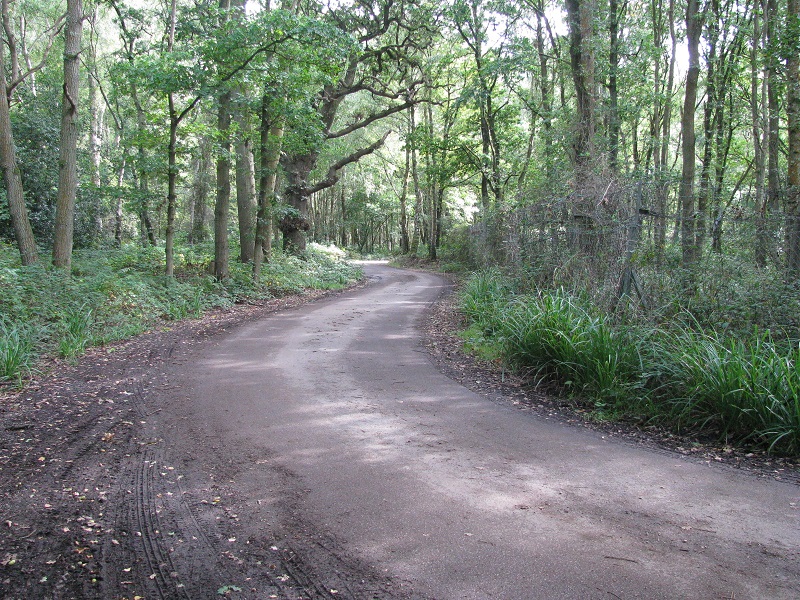 …and tomorrow I’ll give you part 2 of this adventure, at Long Siberia.