I’ve always thought of myself as a somewhat picky eater, but really, I’m only picky if there’s a choice. Example: if my choices are a Burger King, Applebee’s or local restaurant, I’ll always choose the local guy. If the choice is Italian, Greek or Indian, I’ll pick according to what I feel like eating. If none of the choices seem appealing, or the place looks dodgy, I’ll go without.

This morning I was having breakfast at the Fleabagge Inne, and it was… acceptable. Bacon was okay (better than the American “streaky” type), the fried eggs were likewise okay, if a tad rubbery, the baked beans come out of a can just like everywhere else, and the coffee was, well, British (poor). To my Stateside Readers, it was like breakfast at the Grandy’s chain, only with worse coffee — but I never eat at Grandy’s. So why was I eating such a canteen-style breakfast here in London? It’s not like you can’t find a decent Full English anywhere, of course; so why here?

At first, I thought I was eating it just because it was free, but on reflection, it wasn’t just that: it was also because it was convenient (just downstairs, as opposed to walking around looking for a place) and, as I realized while eating, it was actually no different from the many hundreds of breakfasts I’d had at boarding school as a boy. In other words, while I’ve become a fussy eater, I’ve had far worse breakfasts before. I don’t really mind compromising when it’s convenient — and I’m only here for a couple of days anyway before heading up to Scottishland, so what the hell.

And there’s nothing wrong with “free” either.

Right: I have an open day in my hands before meeting up with friends, so it’s off to the world’s best bookshop: Foyle’s, on Charing Cross Road. 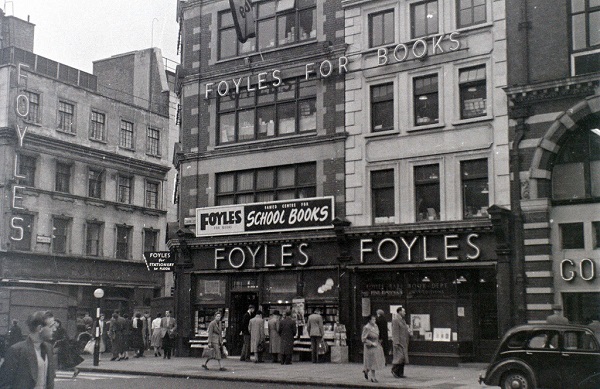 They’ve modernized it, of course, [sigh] but somehow, I think I’ll manage. That’s not going to be free…