I have a theory that for many women, sex, or rather agreeing to have sex is difficult, and especially so for the first time with a new partner. How else to explain the fact that so many women admitted that their first time with a new man was generally experienced in an alcoholic haze? (For those who haven’t been keeping up, the source data is here.) So if confronting herself about her “slutty” behavior (even if the sluttiness is only in her own mind), a woman would like to have an excuse like “Oh, but I was drunk…” and thus can excuse away or justify the indiscretion. Or else, as the original study showed, women can even explain away the drunkenness as just a regular part of the dating process, so therefore it’s okay.

I also believe that this is why so many women have rape fantasies, because “Oh, he forced me to do it…” is likewise an expression that denies the woman’s [shameful] complicity in the act. (Of course, now that it’s become okay to accuse a previous partner with actual rape as part of the excuse, the whole thing has become considerably more sinister, especially as such accusations can take place months or years afterwards and still be considered valid by law enforcement. But for the sake of argument, let’s treat this scenario as but a blip on societal consciousness which will disappear at some point when women regain their sanity. We can only hope.) Certainly, this explains female submissiveness (outside a natural submissive personality anyway), which can be regarded (by women) as a kind of watered-down rape fantasy.

The only time, I think, when self-delusion disappears is when a woman encounters a universal object of female desire, such as a hunky actor or popular musician. Even then, there is a “safety in numbers” excuse — “OMG everybody is crazy about him!” — which makes it okay, or at least, provides a figleaf of an excuse for irresponsibility and sexual licentiousness. You only need a sliver of an excuse, and it will be acceptable, in other words.

I think men, on the whole, just go “Huh?” to all this, I suppose because there’s little societal censure in licentious sexual activity for men (yeah I know, double standards whatever). But I think we men need to understand this female need for self-justification (or -delusion) when it comes to sex, because how else can we otherwise explain that so many women seem to need booze to help them get it on, even with longtime partners and/or husbands?

It’s not just partner-sex which occasions such a mindset. I recall one woman tweeting (? I think) of her humiliation when her suitcases were searched in Customs, and her collection of travel vibrators and -dildos came to light. Equally astonishing was the number of women who commented with their own humiliations on similar occasions. (I didn’t take note of links or numbers because I read this before I got back into blogging, and didn’t think I’d need them. But I recall that the sympathizers numbered well into the thousands.) So the market came to the rescue in the comment thread, with many women extolling the virtues of Bergamo’s Cucumber Soothing Gel as a travel accessory, which seemed rather odd to me until I found a picture of said wonder-substance: 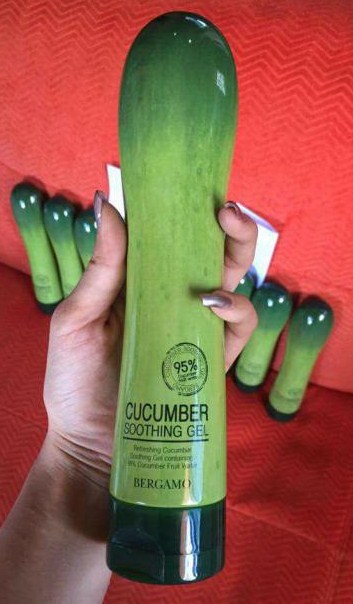 Of course it’s the product, and not the packaging which makes this so appealing to women — “It’s for my skin condition, Mr. TSA Agent!” — and thus is plausible deniability maintained.

You’re not fooling anyone, ladies… but hey, if it makes you feel better about yourselves (and gets us guys involved in the process, so to speak), then go for it.