Several years ago, Kim Kardashian was robbed in her Paris hotel room, and the popular response to this event was horrible.  It prompted this response from me on these pages, and I stand by every single statement I made back then (please go and read it before continuing).

All that said, I have to say that it makes me wince when today’s glitterati  and sports heroes show off their conspicuous wealth.  Here’s one example of some guy getting robbed of his $72,000 watch, and another example of stupid display: 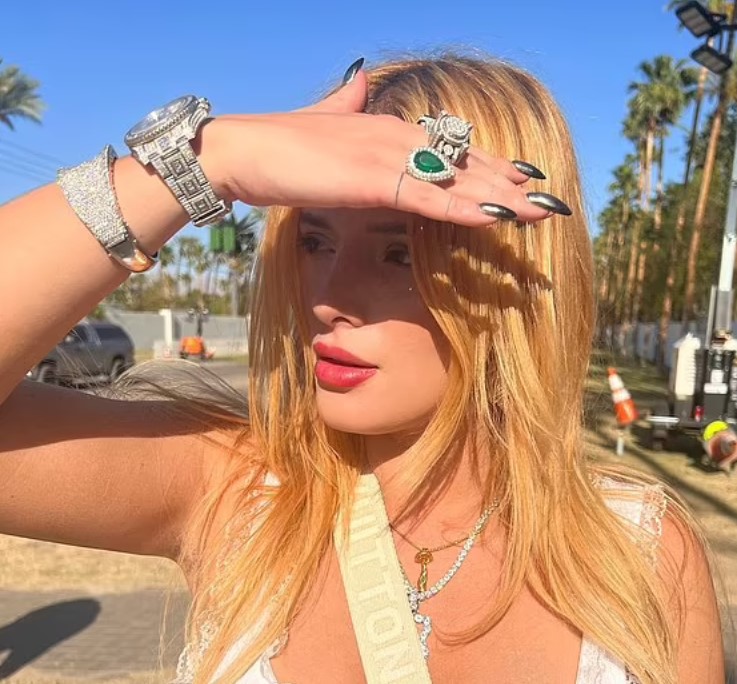 That’s former Disney-girl and now-slut-extraordinaire Bella Thorne.  I can only hope that what she’s wearing on that single wrist and hand are paste, and not real jewels;  but somehow, I don’t think that’s the case.

I used to know a fabulously wealthy man who had a habit of buying his wife expensive jewellery, and paying a small fortune to have the pieces scrupulously copied in glass and gold-plate so that she could wear them in public.  I once asked him why he bothered buying the real thing at all, if all she was going to do was wear the fakes.  His reply was priceless:  “The real stuff is an investment;  the fake stuff is for her ego.”

I have no answer for any of this, by the way, because I don’t think there is one.  Criminals are always going to target the wealthy;  and if the wealthy want to wear a neon sign on their bodies that says, “I’m rich!” and goblins see the signs and act accordingly, I guess that’s just the way of the world.

As for Amir Khan:  I cannot imagine spending over seventy grand on a watch that ugly, but as we all know, wealth can’t buy you taste.