I saw an article which mentioned a man named Karl-Heinz Rumenigge (pronounced Room-in-nigga ), and I had a good chuckle at the memories the name evoked.

Back in the 1980s, Rumenigge was West Germany’s chief striker in their national football team, and he’s ranked 26th in the Top 50 World Cup Footballers Of All Time.  (The list includes Pele, Maradona, Cruyff, Messi, Yashin and Zhidane, so we’re not talking mediocrity here.)

I used to love watching him play, but not for the usual reasons.

You see, outside the penalty area, Rumenigge was hopeless:  he’d get the ball in the midfield, then trip over his own feet and fall over, or kick the ball into touch unintentionally, or pass the ball to the opposition, or kick one of his own team’s players accidentally — there was no telling how badly he could screw up.  (I exaggerate, of course, but only a little.)  And he had the worst hairstyle in football: 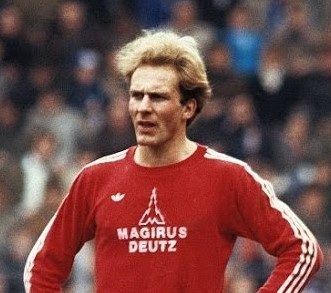 But when he got a sniff of the ball in the opponents’ penalty area:  GOAL.  Almost without fail, there would be a goal, whether by a thunderous shot which made the goalie look foolish, or by dribbling it past three defenders before netting the ball, or back-heeling the ball through a forest of legs, or poaching a loose ball anywhere within ten yards of the goalposts;  whatever it took, Karl-Heinz would get the job done (video).  At his club Bayern Munich, he scored 200 goals in ten years, and playing for Germany, he scored 45 goals in ninety-six matches, including a hat-trick during the 1982 World Cup.

By the way, he’s no dunce:  nowadays, Rumenigge is the Chairman of Executive Board of FC Bayern München.  And he has a better haircut. 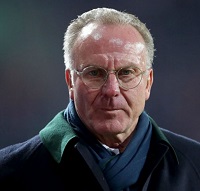