Earlier this week I went off to the range to finish sighting in the Ultimate Long-Distance Rifle:

I’d zeroed the thing at 100 yards (just to “put it on paper”), so now I was making the final adjustments to give it a 200-yard zero, and also checking to see which ammo it “prefers” (between the Federal “Non-Typical” Whitetail Softpoint 180gr and the Winchester SuperX Powerpoint 180gr).

The ammo part first:  on this day, under these conditions, using this gun, fired by Your Humble Narrator, the Federal stuff (my “premium” choice) was a bust.  I couldn’t get anything like the accuracy I got from the Winchester loads in the first couple of targets, and so I only fired five rounds into the target below (the last five rounds in the box).   It’s not bad ammo, of course:  but under all the above conditions, it wasn’t as good as the SuperX.

Next, I adjusted the Zeiss up 2 inches, and used a point-of-aim a little below the target bull, trying to land the bullets into the bull using a “hold-under”.  (I know, it’s a little wonky as techniques go, but it’s how I do this kind of thing, and it seems to work for me.)

Here’s a pic of the last targets I shot, suitably annotated, at 100 yards distance: 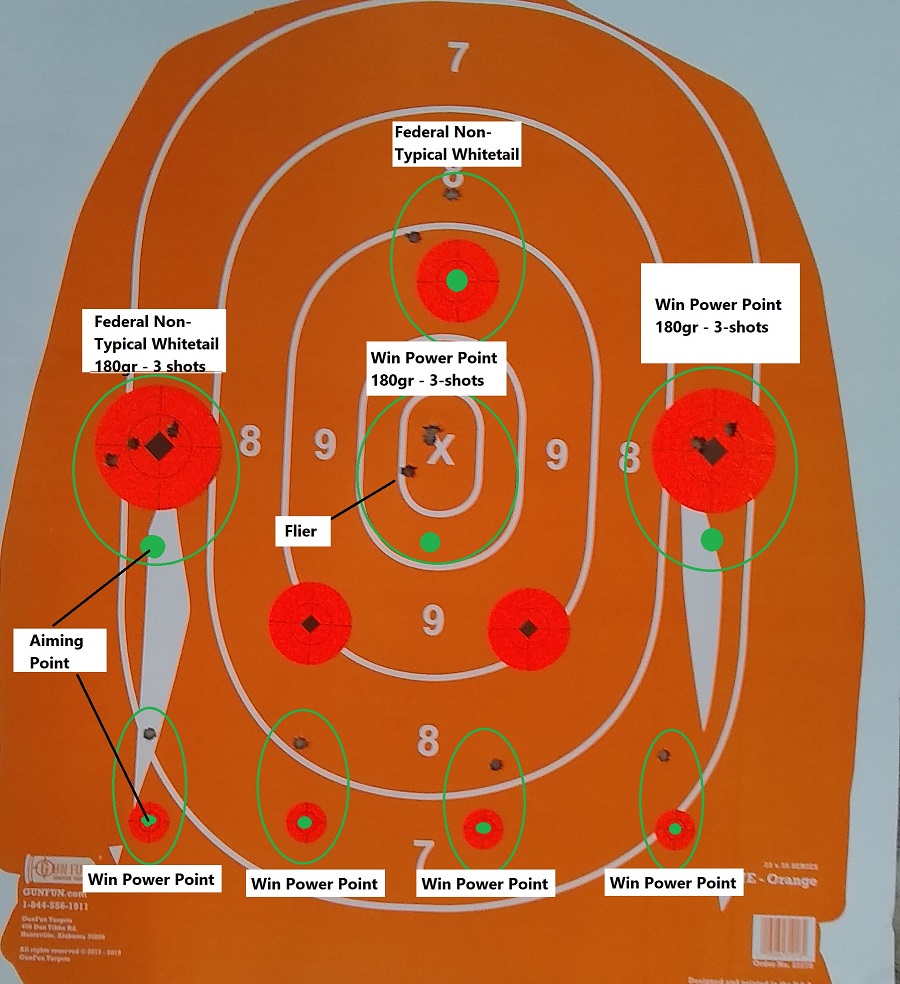 The bottom four smaller targets may require a little explanation.  Generally, once I think I’ve zeroed the scope/rifle combination to my satisfaction, I throw caution to the winds — all that precision stuff makes my head ache after a couple hours’ hard concentration — and I go for a “rapid” fire string — one bullet per target, holding on the bull because it’s just easier to acquire it when you’re shooting and working the bolt as quickly as you can.  From a precision perspective, it sucks — but as preparation for hunting, it’s pretty cool practice, and it’s always worked for me.  Also, I dialed the magnification down from 24x to 10x, to give me a wider field of vision and help me reacquire the target more quickly.

One last thing:  all these shots were fired through a “dirty” barrel — I’d already put thirty rounds through the gun while shooting at the previous targets, I was running short on time, and the range doesn’t allow cleaning of guns in the bay anyway.  Gotta say:  that’s a pretty decent result, all things considered.  Oh, and I did allow the barrel to cool between target strings, except of course for the last four rounds fired.  (The flier in the central group was caused by the guy in the next bay letting off a round a split-second before I did.)

Okay, folks:  that’s about as much as my fading skills will allow me to zero the thing.  Over the weekend I’ll have the draw, and announce the winner next Monday, Sep 14 at 1700h Central.

The ULD Rifle will be shipped on Tuesday morning first thing.

Note:  I’d planned on also testing Sellier & Bellot ammo as well, but the cartridges set off the range’s magnetometer, indicating doubleplusungood steel somewhere in the boolet;  so, no S&B on this day.