As any fule kno, I have a love of All Rifles (Mauser), and the 1909 Argie is no exception.  Yeah, it’s chambered in the offbeat (and wonderfully-powerful) 7.65mm Argentine — how offbeat? the “53mm” cartridge casing is actually 53.6mm in length — but like all Mausers of the Gew. 98 or K98 family, the action is almost indestructible and I would have absolutely no hesitation in picking up one of these to go into battle, hunt at medium ranges, or blow away a goblin.  In terms of power, it’s roughly equivalent to the British .303 Enfield of the same era;  in terms of recoil, it’s worse.  I once did a side-by-side shoot-off with two rifles thus chambered, starting with a mag load (10 rounds) from my old SMLE .303.  Then, after three rounds of the 7.65mm, I put the 1909 down gently and had to have a soothing shoulder massage from     my girlfriend of the time.  The .303 was a pleasure, by comparison.

Another reason not to plink with the Argy rifle is the ammo.  While it’s not especially uncommon (from vendors who specialize in such cartridges), you’re not going to find it at Bubba’s Bait ‘n Ammo Shack.  But thank goodness for those erstwhile Commies at Prvi Partizan, where the cost per squeeze is about a dollar (actually quite reasonable, given the obscurity of the cartridge).  Shooting a serious hunting load from Norma will treble that, but hunting doesn’t require thousands of rounds to be touched off — if you know what you’re doing, of course.  Hornady also makes cheap-ish 7.65mm ammo, but the bullet is much lighter (150gr vs. the “normal” 174gr), which means you’ll have to adjust from your practice ammo to your hunting cartridge — always a little problematic with iron-sighted rifles.

Also, the 1909’s straight bolt handle makes mounting a scope problematic, and if I were to advise against anything to do with the Argie, it would be attempting this yourself.  If you just have to have a scope-mounted old 98-type Mauser, start with one of the later (e.g. M48 Yugo) models.  Even that can require very tall mounts:

As for the 1909 rifle itself:  it never saw combat with the Argentine armed forces but even so, most of them are pretty battered by now, and all-number-matching rifles are a rare find.  There’s also a lot of stuff said about the Argentina-made 1909s vs. the German-made (DWM) ones, but I’ve fired more than a couple of the Argy Argies, and they’re fine.  In any event, DWM made nearly three times the number of the others, so mostly you’ll find it’s a DWM. 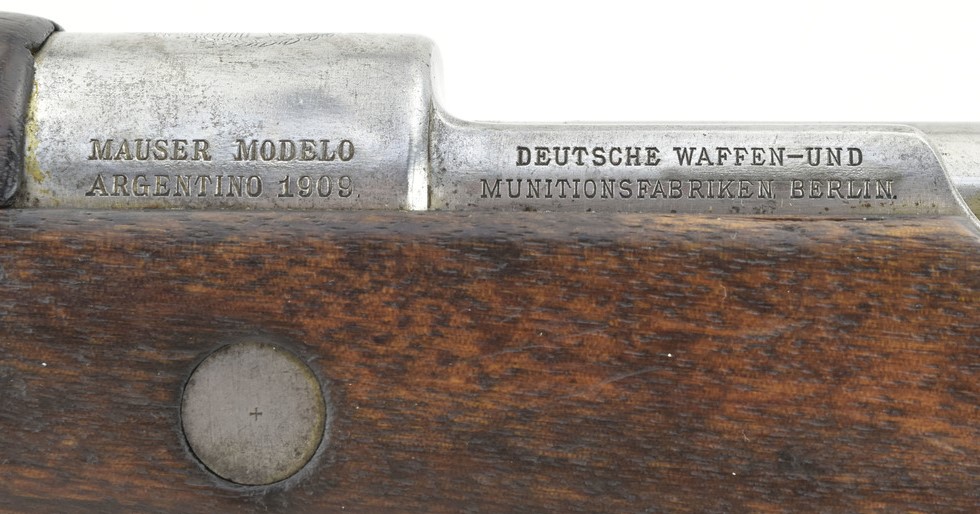 The Argentinians (not DWM, as I recall) also made a carbine model (like this one), but that is even less pleasant to shoot.  When it comes to recoil, heavier is better.

Current prices seem to run anywhere from $300 (gun shows) – $750+ (FFL), but those at the lower end need to be very carefully checked over by a gunsmith — I wouldn’t risk getting a cheap one, myself.  One inherent problem is that damn rifles are most often the target of amateur gunsmithing — usually converted into a more common chambering.  These should be avoided like the plague.

All that said, however:  the 1909 Argentine Mauser is a sound, effective rifle, and I do regret selling mine.  [exit, kicking self]