At my advanced age and concomitantly-advanced skepticism, it’s not often that something has the power to cause roars of laughter of a volume sufficient for the neighbors to call apartment management to check in case I was injured or violently ill or something.  Reader Gwalchmai sent me this article via email, and I would caution you all to read it in a secluded spot, lest your laughter cause similar mayhem.

For the wilder Microturbo Thrust unit, advertising claimed for the model T-16-A Formula J Thrust Engine an additional 1,980 hp was at your fingertips. In reality a small rocket-thrust engine, once ignited, hot gases were instantaneously unleashed, spinning small turbine blades in the housing, with an optional turbine wheel available to create “spectacular flaming night runs,” according to Turbonique hype. This option was for those needing more sensorial input than the shockwave of 600-psi ignited rocket fuel slammed into a 100,000-rpm Inconel orb—all taking place right behind your head, as you glide an inch or two off the ground.
The snail-looking device, with what looked like a child’s bicycle horn protruding from one end, came with “easy to follow installation and operating instructions.” We assume the operating instructions were basically, “Don’t do it!” As for the bicycle horns, those were aluminum nozzles used by NASA in space. They were just for publicity, and in actual use would have melted in seconds.

And it gets better, when instances of “actual use” are described.

Now, in similar spirit, allow me to show a prototype cartridge I’m working on:  the .750 Kimbo self-defense cartridge* (shown with a .357 Mag cartridge to provide scale): 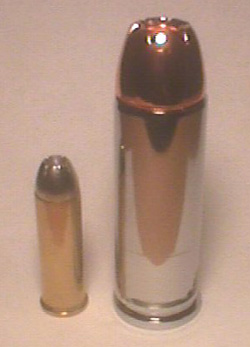 Manly men only need apply.  Even Ken Barrett took one look and went pale, as did the guys at Magnum Research.  Someone at Taurus apparently committed suicide when they saw the photo, and Smith & Wesson responded in the negative, via their attorneys.  Ruger called it “interesting”, but that’s all.

Only the folks at Bond Arms thought it looked “cool”, and are thinking of including a Derringer thus chambered in their 2020 catalog.