Tami Keel talks about revisiting the 1911 as a carry piece:

I’ve had hardly any serious trigger time with 1911s for years now, so getting the opportunity to put several cases of ammo through a few over the space of a couple months was a chance to get a fresh look at the old object of my affections.
It reminded me how wonderful the trigger on a good 1911 is. The only way your trigger finger could have a more direct link to firing the pistol is if you reached inside it and pushed the sear off the hammer hooks yourself.
It reminded me of how slim the 1911 is. It may be a big-bore horse pistol at heart, but it’s skinny enough to carry inside the waistband with ease.
It reminded me of how it fits the hand.

All the above are good points, and I agree completely. However, Tami adds:

But, most importantly? It reminded me of all the things I don’t miss about carrying and training with 1911s, and that list is a lot longer than I would have guessed it would be.
For starters, I had forgotten how much of an annoyance low magazine capacity could be. There’s a saying about high-performance fighter jets: they’re almost out of fuel just sitting on the runway, and definitely out of fuel after takeoff. The 1911 is like that. I mean, you have to change magazines just to shoot a 10-round chronograph string! Horror! Nine-millimeter 1911s mitigate this somewhat, but 10 rounds still isn’t a lot of BB’s in the tank when you’re used to 15, 17 or more.
Speaking of magazines, how spoiled I’ve been for the last five years! When I was carrying a Smith & Wesson M&P, I bought M&P mags and they worked. Now I’m carrying a Glock and I buy Glock magazines and they work. When I was carrying a 1911, I practically had to have a degree in the arcane and eldritch science of 1911 magazine selection.

Mostly, I agree with her take on the latter issue — although I should point out that Chip McCormick makes the excellent 10-round PowerMag: I’ve used them in IDPA shoots and when I travel, I carry five of them in my bag. (I agree, though, that 1911 manufacturers — especially Colt and Springfield — did themselves no favors by issuing such crappy mags with their new guns. Once I discovered the aforementioned PowerMags, away went the silly and unreliable 7-round “issue” mags — literally: I hammered them flat and trashed them. I’ve fired PowerMags exclusively ever since, and in my Springfield they’re even more reliable than Wilson mags.)

I still don’t get the fascination for high-capacity mags in a non-military / -law enforcement scenario. I mean, seriously: if the average gunfight is pretty much over, one way or another after three rounds have been fired, the remaining dozen in your double-stack mag are superfluous.

More of a problem, though, is that the 15-round hi-cap mags make a handgun’s grips a lot thicker — and for most women, that could be problematic. (It isn’t for Tami because she’s a big woman — her hands are bigger than mine, I think.) When she talks about how the 1911 “fits” in the hand, it’s because the grip isn’t like holding a pineapple. Even Connie (another big woman) had a problem with hi-cap mags — her Browning High Power was at the absolute limit, size-wise, for gripping comfort, and she used to admit that my 1911 felt much better in her hand. (The recoil, of course, was another story.)

Tami’s right about one thing: the 1911’s trigger is without equal among serious carry pistols. When and if I do quit shooting my Springfield 1911, the biggest adjustment I’ll have to make is getting used to an inferior trigger, almost no matter what gun I end up shooting. The only non-competition pistol with a better trigger (out of the box) is perhaps the Browning Buck Mark, and it ain’t a carry piece.

There’s one more thing to add in the 1911’s favor. When you’re carrying that 3-lb chunk of steel loaded with some fine hollowpoints, you have the confidence of knowing that in any adverse circumstances, you have at your command the finest carry pistol ever made, and one of the greatest cartridges ditto. And you don’t really need more than a few rounds either, if you know what you’re doing — and you should.

And I agree: when you’re blasting hundreds of rounds away at the range, it is more convenient to have more rounds between reloads. But I don’t own a self-defense gun to plink at paper. My 1911 is for serious business, and its weight, low ammo capacity and all the other “faults” of the 1911 are completely irrelevant. 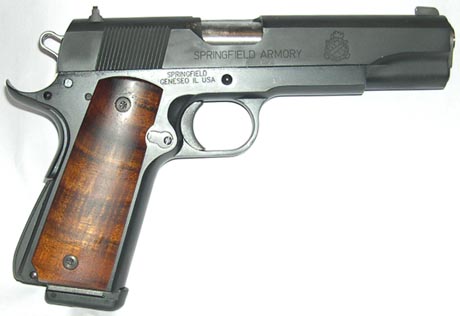 Let me share with y’all a little thought I’ve been mulling over recently: if I do ever retire the 1911 (because recoil), I might seriously consider carrying a .357 revolver as its replacement. Yeah… six rounds instead of fifteen. Don’t care. Right now, my 1911’s PowerMags are loaded with only eight rounds anyway, so the difference is negligible.

Which revolver would I carry, you may ask? Why, the S&W Model 66 Combat Magnum, of course (because they don’t make the “no-back-sight” Model 65 anymore): 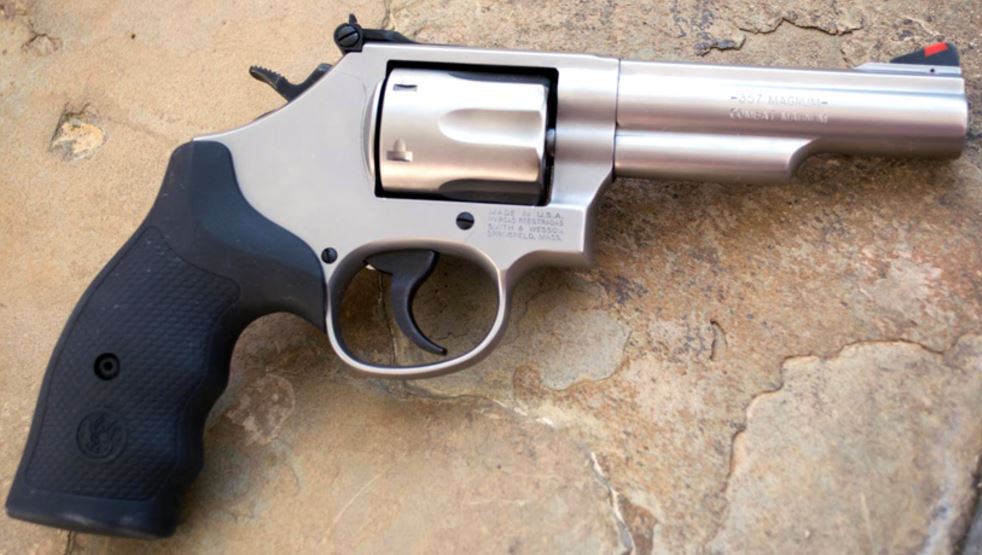 How’s that for “low magazine capacity”? (And by the way, the K-frame Smith “fits” in my hand better than a Colt Python. I’ve owned both, and I’m not exaggerating.)

You may all start shouting at me in Comments, now.

Egregious Mistake Department:  I mistakenly called Chip McCormick’s mags “ProMags” when in fact they’re “PowerMags”. Thanks to Reader DrewK for pointing that out, and the necessary edits have been made.