The Free Markets get the Daily Telegraph (Dead Tree version) delivered each day, so I comb it for items of general (i.e. not just for Brits) interest.

Apparently some Labour dickhead politician [some overlap] said that the Grenfell Tower fire was a direct action of the Tory Government, which should be held responsible for the “murder” of the unfortunate people who were turned into kebabs. Lest we forget (and he apparently did so): council housing was a Labour invention and institution, and the local council responsible for  said tower block is controlled by the Labour Party.

I have no comment to make about that statement, because we all know that the Left is a bunch of evil bastards who never fail to lower all standards of decency in their pursuit for power and control over people’s lives.

Apparently, this lack of decency has come as a complete surprise to one of the Telegraph’s writers, who asks plaintively, “Has The Left Lost All Decency?” followed by 500 words of justification for said question when, as any fule kno, the Left never had any decency to start off with.

Of course, when the Labour/Communist leader Jeremy Corbyn [spit] has already said in public that he wishes the IRA had won their struggle against Great Britain and that he pretty much sympathizes with their modern-day counterparts, radical Muslim splodeys, one would imagine that the latest Labour pronouncements should come as no surprise. However, it appears that the Conservatives meed to have their heads beaten with the Clue Bat on an hourly basis as to the Left’s inherent indecency, much as is required for the gentry Republicans of the GOPe persuasion. 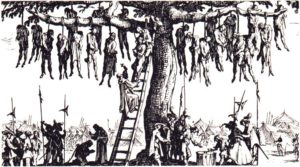 Feel free to add your own suggestions as to who should occupy the Hanging Tree first, Leftists or squishy conservatives.