“Usually, your social commentary is just a bit too aristocratic, or ‘posh’, for my taste.”

SKB, round about now my old housemaster and various teachers who were entrusted with turning this young hooligan into a gentleman are beaming with pride. Mostly, I suspect, they would be relieved because let’s face it, this must have seemed at times to be a daunting, if not insuperable task.

Here’s the thing. For the last five years of my school life I had the great good fortune to attend a seriously “posh” (and spendy) boys-only private school in Johannesburg called St. John’s College. It was founded in the late 1890s and when I was there it was one of the the top five private boy’s schools in South Africa (the others being St. Andrew’s, Bishop’s, Michaelhouse and Hilton Colleges), and at the time all five were rated in the top 100 high schools in the world. Our “brother” school was Eton College in the U.K., and we had a continuous exchange program with both teachers and students. Here’s a sample pic of the school, taken from the “A” rugby field: 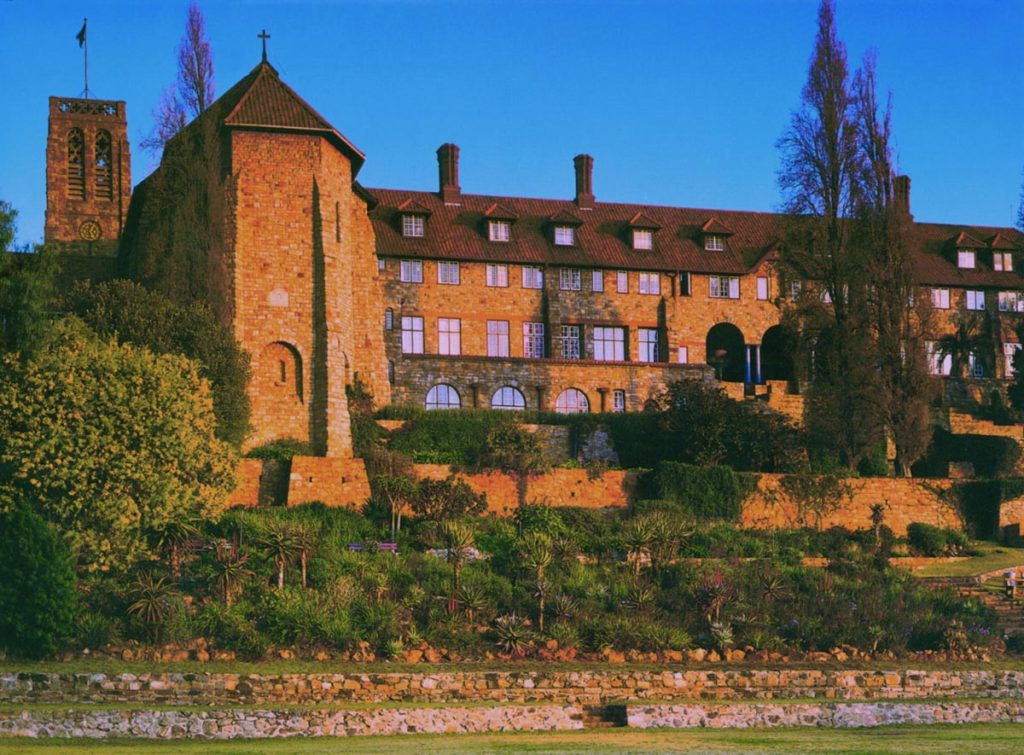 The large building on the left of the pic is the chapel — and actually, there are three chapels: the Crypt (semi-underground, and the oldest part of the school), the Main Chapel above it, and to the side the tiny All Souls Chapel which commemorates those past students and teachers killed in the various world wars. Here’s the Delville Wood Cross in the All Souls, made from one of the trees chopped down by shellfire in the 1916 battle and one of only five in existence: 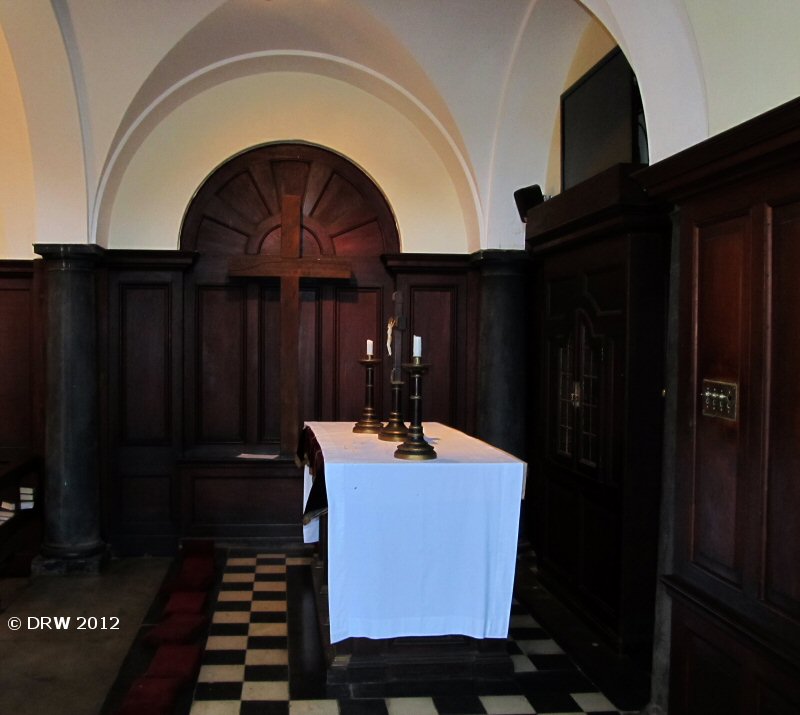 And if you’ve been paying attention to my writings, Delville Wood was where my grandfather Charles Loxton fought and was wounded.

The buildings were designed by architect Sir Herbert Baker, who went on to design the South African Parliament buildings, in much the same style. This is the David Quad: 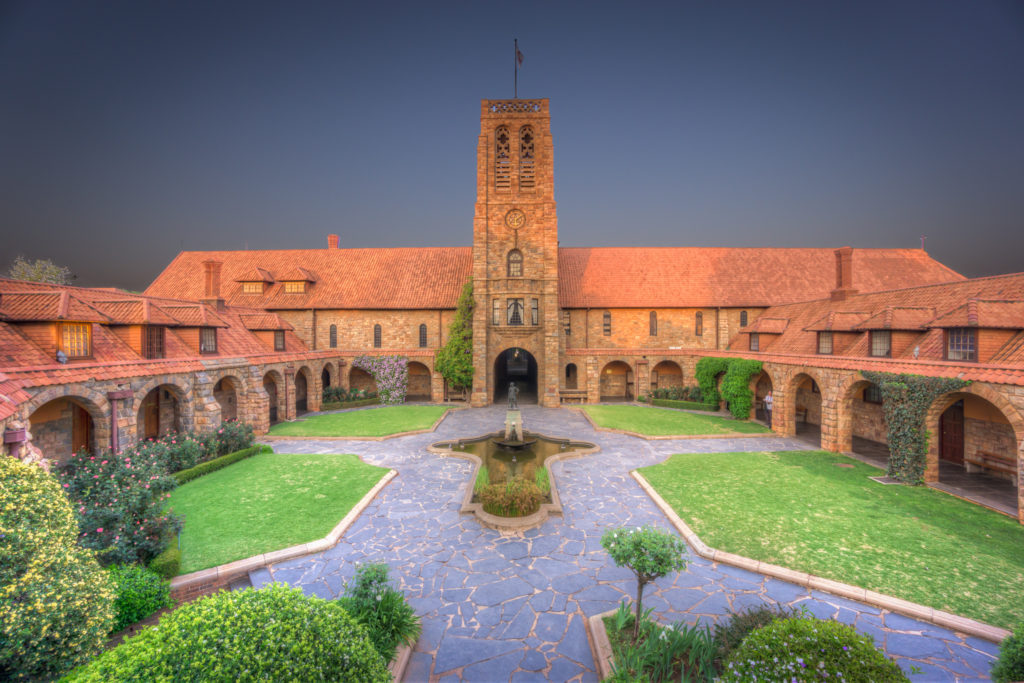 …and another view, taken from the other side: 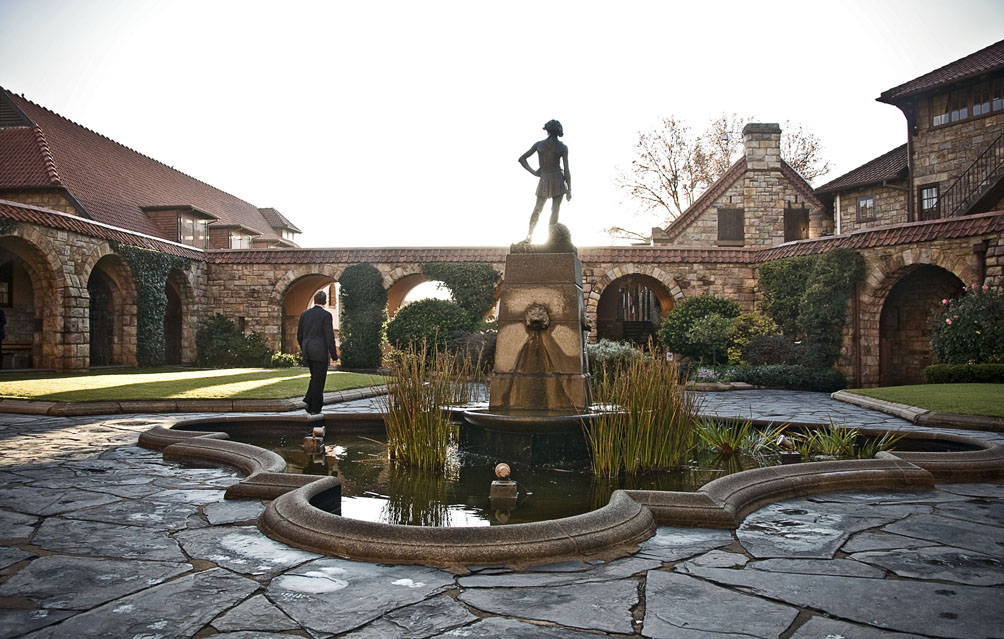 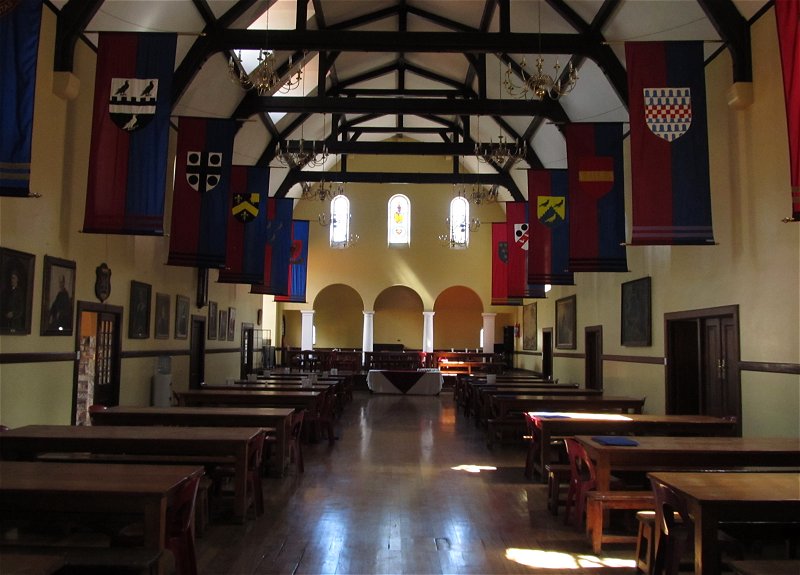 Yeah, I know: Hogwarts. Except that all our teachers were like Snape. And finally, this is the “A” cricket field, which is on the other side of the school, on top of the ridge (the school is to the right):

In the traditional sense, a “college” is not a university; a university is a university. A college is a preparatory school for university. And so it was. Our academic life was rigorous to a degree which would nowadays be called “brutal”: bi-weekly (called “fortnightly” in the British fashion) examinations and report cards which went home to be signed and commented on by parents, and yes, we were “streamed” in A through D classes. So demanding was the work that a first-class pass (a “First”) in the final examination meant that one did not have to sit the entrance examinations for universities like Oxford or Cambridge; indeed, for a couple of subjects (e.g. Latin, which I took for all seven years), one could skip the first term at either of those universities. There was a post-grad year (called “The Sixth”) which offered U.K. A-levels, which I never took (and have regretted ever since).

Schoolwork wasn’t all. Sports, of course, were compulsory: cricket, swimming and athletics, along with electives of tennis and squash in the summer; and either rugby or field hockey in the winter. (Basketball was added much later — we called it “netball”, and it was only played in girls’ schools.) To say we were fit would be an understatement: pre-breakfast runs, calisthenics (“P.T.”) during school hours, and at least three afternoons a week devoted to sports (more if you played for a school team against other schools on Wednesdays and Saturdays). It wasn’t so much fitness as torture, but we were almost as fit as Olympic athletes as a result.

Discipline was likewise brutal (caning, detention, “hard labor” and suchlike exotica were routine), and it should come as no surprise for anyone to learn that I have the all-time record for the number of caning strokes — one hundred and twenty-eight — administered to my mischievous and it must be said deserving backside over the five years spent in College. (I only had a few, maybe a half-dozen or so, given to me in my two years in the Prep.) Caning was later abolished, which is why my total is the all-time record.

Above all, however, it should be said that St. John’s stressed two things: severely-circumscribed behavior (appearance, manners, discipline and religious discipline) and absolute freedom of thought. My last public speech at College, delivered without pre-censorship to the school, parents and staff, argued that prostitution should be legalized on health grounds. (Yes, I’ve changed the 16-year-old Kim’s opinion, although I still support the “health” rationale.) The next speaker’s topic was “Is religion still necessary in the modern world?” Neither speech drew anything but a dry “Interesting” from the Headmaster in his concluding comments, and all three speakers went on to get Firsts in the finals.

In short, St. John’s made absolutely no bones about the fact that we boys were going on to become productive citizens as part of the elite stratum of society. What we got out of our schooling was an absolute belief in ourselves and our worth to society, provided we didn’t take the wrong road (and lamentably, some did; but most didn’t). To be an Old Johannian means being a member of one of the most exclusive clubs in the world, and we can hold our head up in any company. As one of my school friends once put it: “There may be other places called ‘St. John’s College’ in the world; but ours is the only one that counts.”

So yes, SKB, my commentary is occasionally aristocratic and posh, not to mention elitist. You can blame St. John’s College for my upbringing, indoctrination and education, but I am unashamedly proud to be that way. Later this week, I’ll talk about The Club — otherwise known as “The Old School Tie Set”.

And for those who care, the School Prayer (from memory):

Lord God our Father, who art Light, Life and Love,
Look down with love upon our College of St. John.
Make it to be a home of religious discipline, sound learning and goodwill,
Which may send forth many, rightly-trained in body, mind and character,
To serve Thee well in church and state.
Supply our wants, and give us increase as shall seem Thee good;
And let Thine angels drive away all evil from us,
Through Thy Son, our Saviour Jesus Christ.
Amen.