So somebody comes to you and says, “Hey, how would you like to share a house with us?” and you run away because you don’t want to share accommodation with anyone.

Then there’s this situation:

A stately apartment on the historic estate where Four Weddings and a Funeral was filmed has had its price tag slashed by half a million pounds after failing to attract a buyer during the pandemic – and could now be yours for just £1.95million.
Apartment Three at Albury Park Mansions in Albury, Surrey, UK, is one of 14 luxury properties in the mansion house was transformed into separate apartments 12 years ago, and has been on sale since April last year.
It consists of four bedrooms, three bathrooms, kitchen/dining room with mezzanine above, utility room, reception hall, and access to gym, spa, sauna and wine stores.

Here’s a pic of the entrance to said mansion: 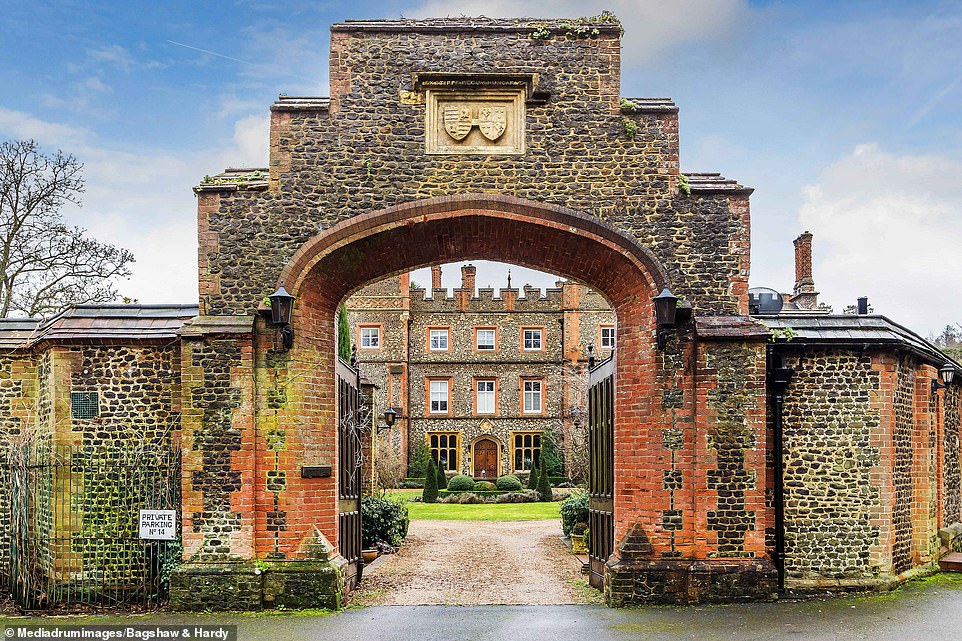 …and the master bedroom: 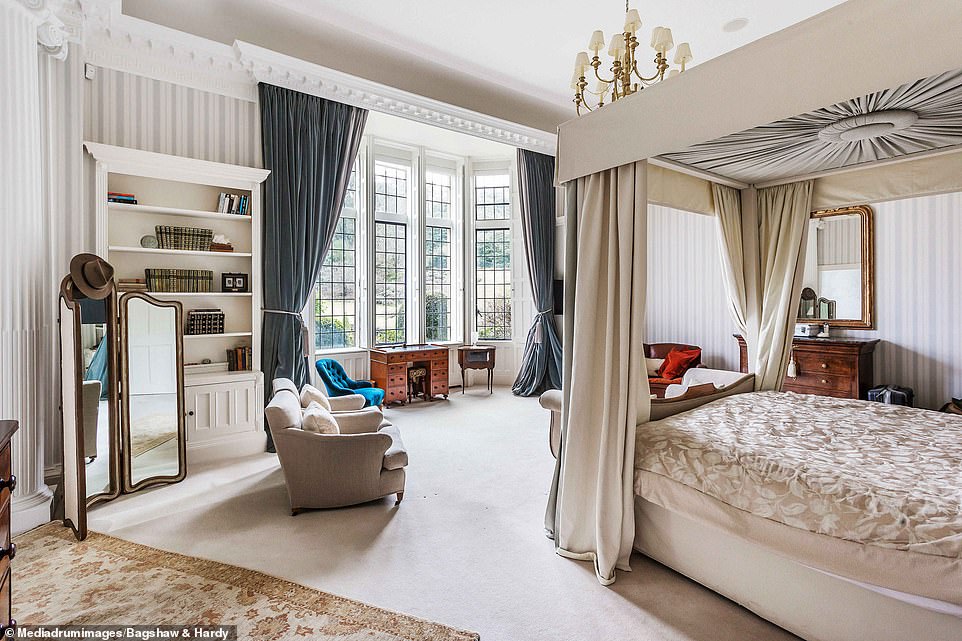 Yeah, it may be a little spendy at about $2.7 million for a 4BR/3BA pad with a detached garage, but you can’t beat the setting.

At those kind of prices, you’ll probably find that the co-inhabitants of the place are bearable.

And for those who care about such things, you can walk to the estate’s church on Sundays, no hassles with parking.

I see that Sean Connery’s old place in Nice is for sale, at a price which is now only ridiculous (not by Midi standards, though): 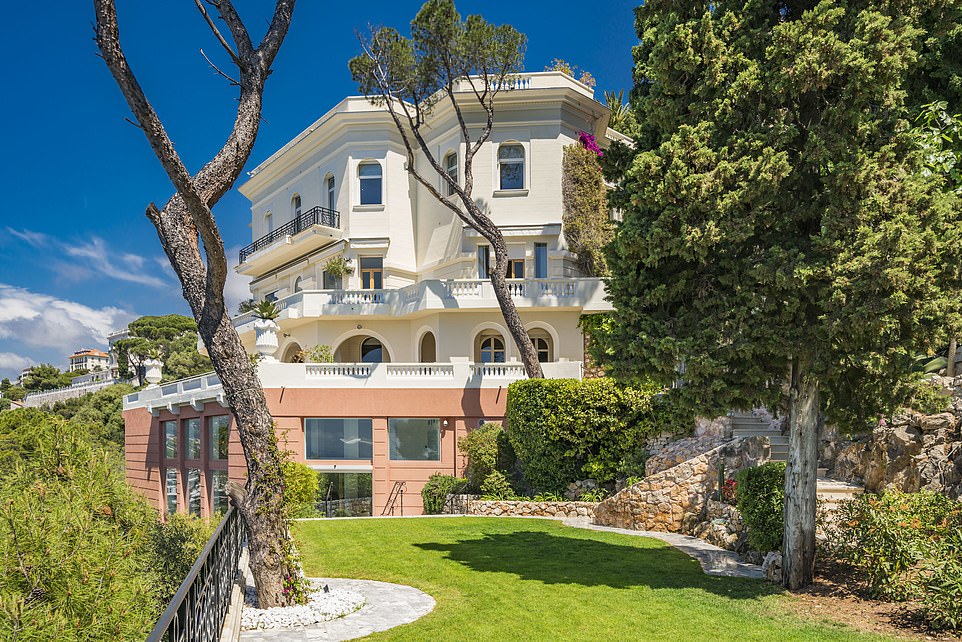 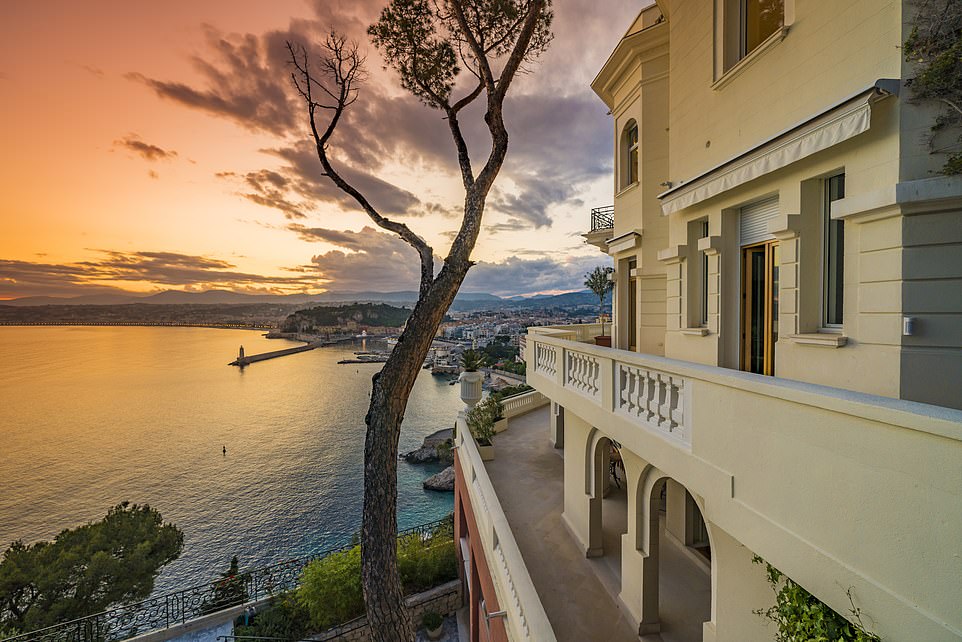 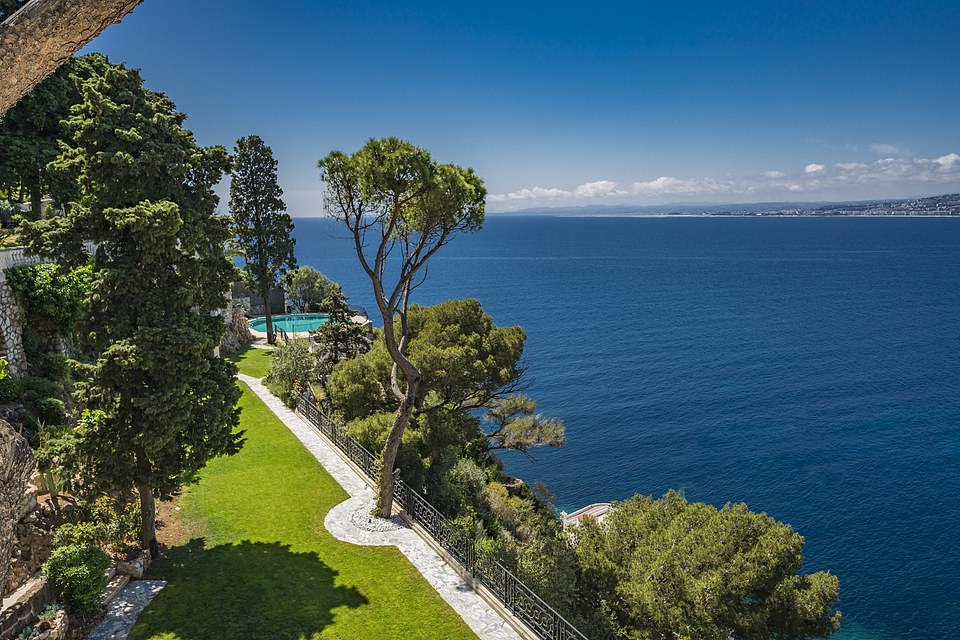 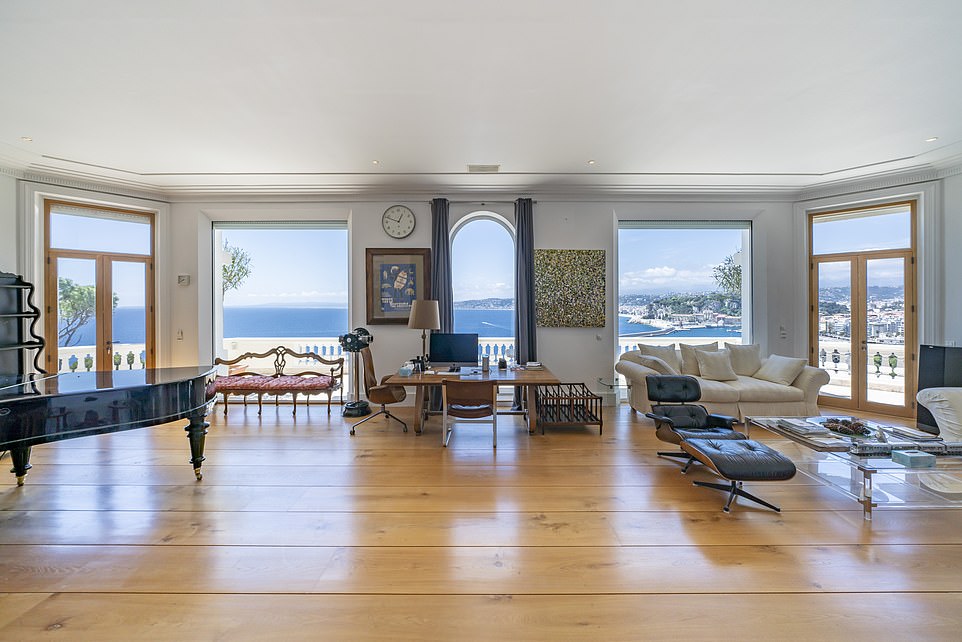 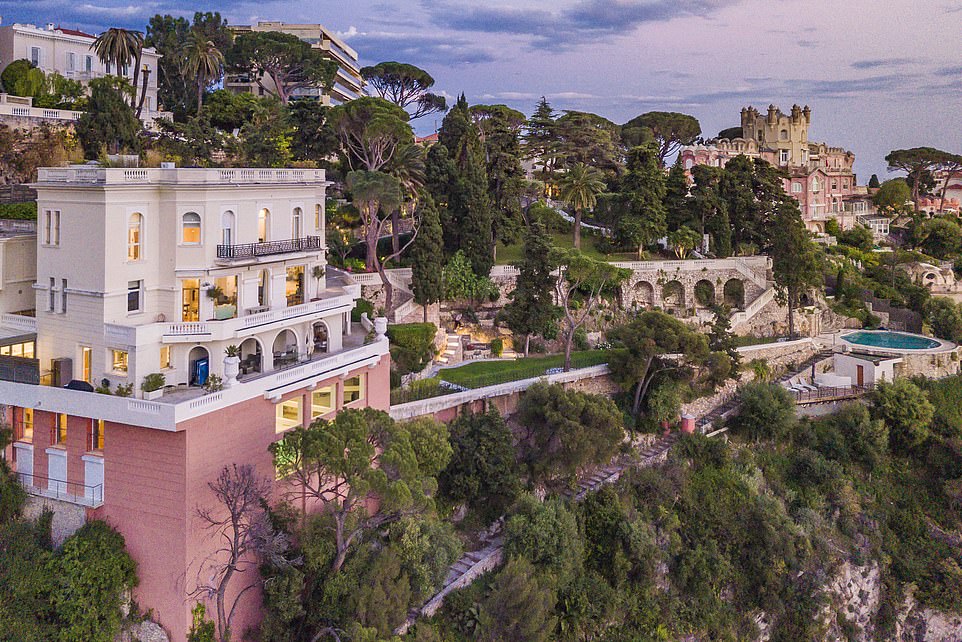 And yes, the French property taxes are sick, and yes the annual “wealth” tax is sicker yet, and all that other negative stuff.

You’d have to carry me out in a body bag.

I know that colors tend to come and go as fashion statements, and maybe soon it will all change.  But I have to agree with the people complaining about this trend (now referred to as the “Grey Plague”):

‘Tasteless’ homeowners have been slammed over a trend of ruining pretty homes with dreary paint-jobs, supersized fences and Astro-turf lawns, dubbed the ‘Grey Plague’.
A number of examples have been shared online in recent weeks, showing how once picturesque white houses, often dating back centuries, have been transformed into ugly, grey mountains stripped of greenery and often with imposing front features.

Yes, that’s the same house.  The picturesque, somewhat eccentric Victorian cottage has been turned into some neo-Bauhaus nightmare, the shrubbery replaced with… concrete, and the family dwelling has come to resemble the offices of a small architectural firm.  To call the change “ugly” is to understate the matter.

I know, I know:  it’s a private property issue, so all you librarians can go back to reading Lysander Spooner or Atlas Shrugged.  Of course you should be able to do what you want with your property — but as it’s in the public domain (being oh-so visible from the street), I likewise have the right to express my opinion that it looks like shit.

The other bitch about a modern trend has to do with this fascination for the color gray / grey (depending on which side of the Atlantic you live;  both are correct).  From the linked article, look upon this foul eyesore, and despair: 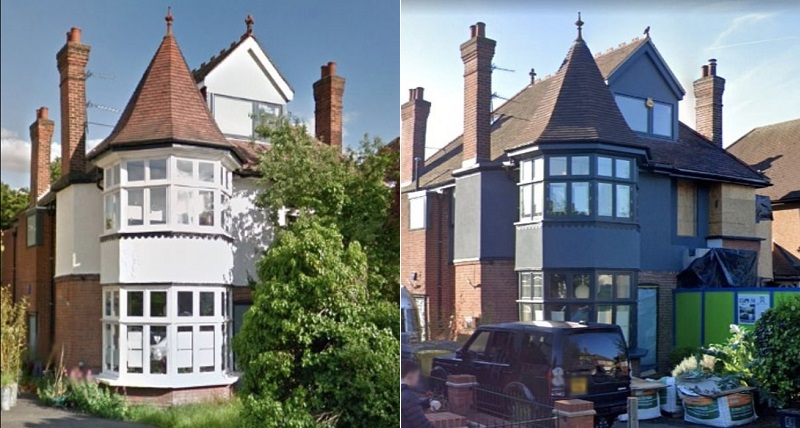 For those who’ve never been to Britishland, allow me to mansplain.

Both these pics were taken on a sunny summer’s day — but, as the old joke goes, that’s not the way to bet when it comes to British Weather.  At least 80% of the time, it looks like this: 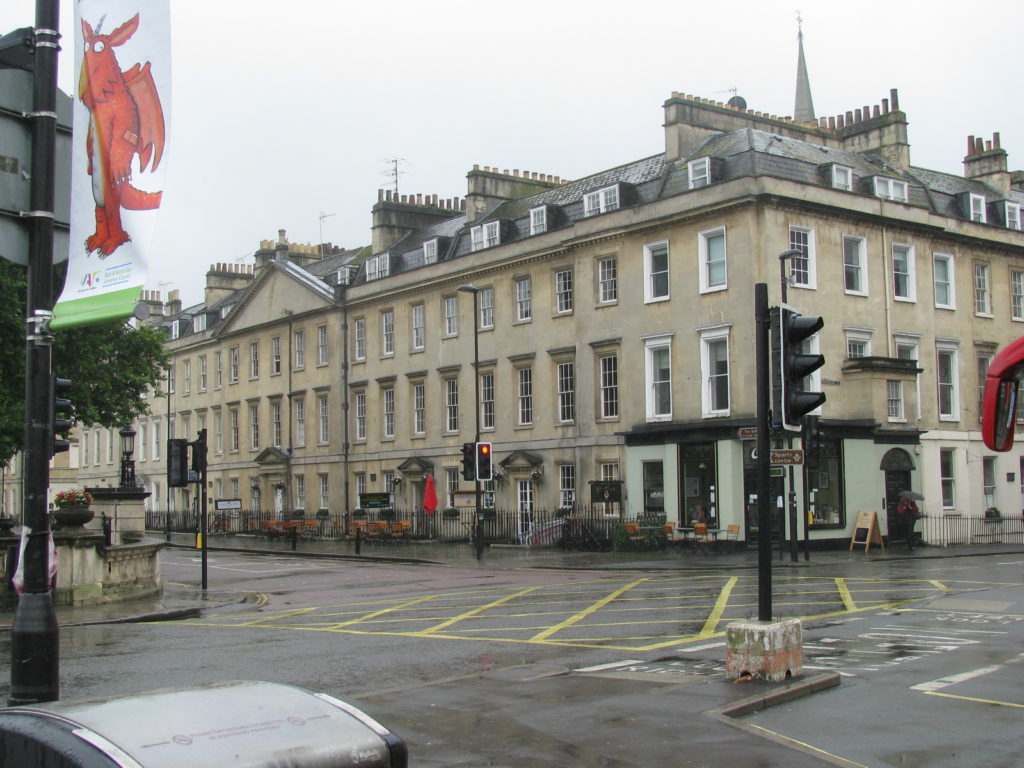 Now use your imagination and add a gray day to the white house in the pic on the left-hand side, and to the gray house on the right.  That’s right:  putting a gray house into a gray day turns “dreary” into “gloomy”.  Kinda like Edinburgh on any day, come to think of it: 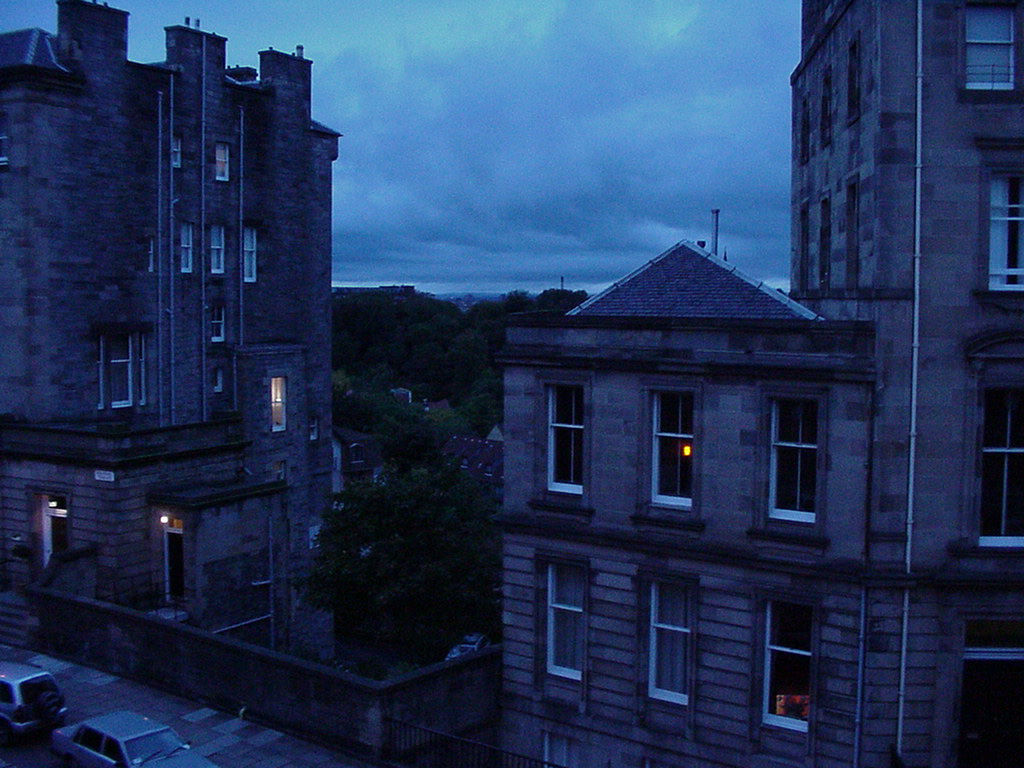 (That was taken from my hotel room just after lunch, in October 1999.)

I don’t really mind gray — light gray — as an interior color, although I think it tends to make the room feel a little cold.  In fact, the walls in our current apartment are light gray and while we’d pick a different color (e.g. pale blue or a very light tropical-beach-sand color) if we had our druthers, the gray doesn’t offend.  However, the outside of our apartment complex is a dark gray, similar to the gray Victorian above, and that makes me want to bring the dynamite, especially when (like today) it’s overcast, chilly, drizzly and as New Wife calls it, “positively British”.  Here’s what I’m talking about (taken at about midday yesterday): 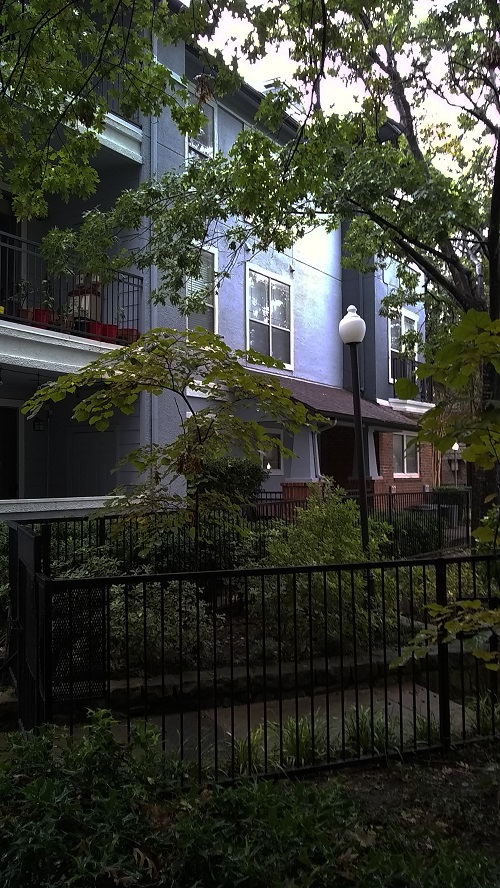 Change that to white walls with gray accents, and we’re talking turkey.  As it is… ugh.

Anyway, as I said at the top, maybe the fashion will change and gray will be replaced with some other color.

My luck, it will be avocado green.  Then there will be murders. 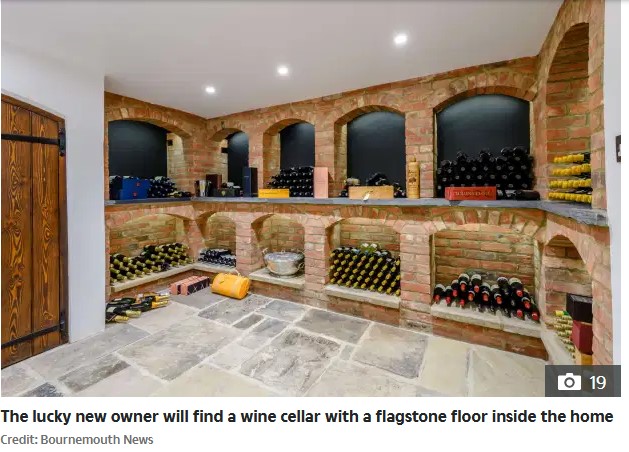 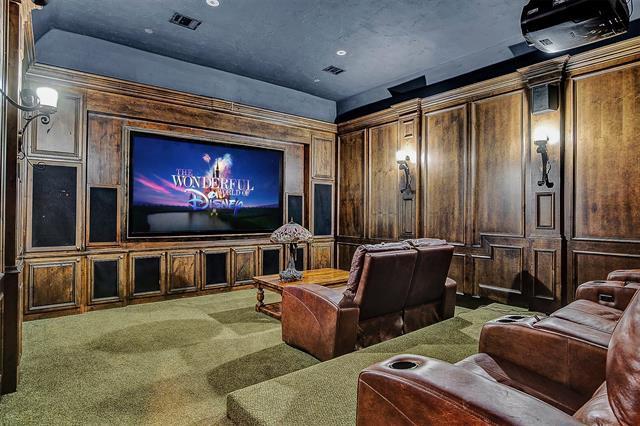 1. four-bay 25-yard air-conditioned indoor pistol range
2. 100-yard rifle range with back stop and shaded shooting benches
3. sporting clays area, with six or more stations
4. six-car garage
5. climate-controlled storage shed for ammo and sundry shooting supplies (maybe backing off one of the ranges) with a decent reloading setup inside
6. outdoor kitchen with both charcoal- and gas grills, including a bar counter
7. woodworking shop, e.g. Norm Abrams’s “New Yankee Workshop”
8. swimming pool
9. surrounding the entire back yard with a couple extra corners thrown in, a go-kart track which could accommodate grownup cars e.g. a Caterham 500
10. Guest house where my friends could stay for their (probably weekly) play dates.

Okay, the race track is possibly something of an overreach, but not necessarily.

As for the “garden” idea… meh.  Patio or deck with pool and BBQ grill, no lawn.  Pots with artificial flowers.

According to Some Survey Or Other (Science!!!), this is what most Brits dream of when thinking about their ideal garden:

Okay, some of them are just daffy — a maze? — and good luck getting the go-kart track past the neighbors (unless you’re going to be racing electric go-karts).

I am as given to dreaming and wishful thinking as any, and probably more than most;  but I can’t help thinking that having so many outdoor activity features (yoga areas, outdoor gym etc.) are not going to be used that often given a climate in which Britain’s principal export is rain.

Also, excepting bloated plutocrats such as Mr. Free Market (whose estate holdings make Prince Charles look like a slum dweller) and Top Gear’s Richard Hammond (who has a castle), most Brit houses have an average outdoor area which can be measured just as well in square inches as feet — and not the 88-foot “desirable” backyard they dream of.

In Kim Terms, 88 feet couldn’t even accommodate a 25-yard indoor pistol range, which leads me to my next point.

Notably absent from all the Brit dream gardens is anything devoted to shooting.  I know that the BritGov (a pox be upon it) seems to frown on the shooting sports, but nowhere on the above do I see listed even something as innocuous as an archery range.  (I have a well-founded suspicion that a similar list taken from a poll of my Readers would have a 100-yard rifle range near the top, followed closely by a 1,000-yard playground where one could happily play with Barrett rifles etc.)

So, on to just such a poll.  In Comments, please list — in order — the top 10 most desirable features you’d like to see in your “back yard” (define it however you wish:  “back forty” is also acceptable).   Don’t bother with explanations or exposition;  the inclusions should be pretty much self-explanatory, e.g. “four-bay 25-yard air-conditioned indoor pistol range” (which would be in my own top 3, incidentally).

No mazes.  Also exclude strange exotica such as “hippie burial ground” and the like.  This is a serious poll. [eyecross]

Have fun with it, and limit ten, please.