Oy, here we go again with an article written with no clear purpose in mind.  Entitled “8 Best Charge-Stopping Bear Cartridges “, it represents unclear thought and worse, unclear direction.  Really, it should be two articles:  best long gun cartridges and best handgun cartridges, but they’re lumped together, with hilarious results.  Here are his top 8:

Let me do the low-hanging fruit first:  as much as I love the thing, forget the .357 Mag as a bear-stopper.  Seriously.  Considering that the .454 Casull has been included, there’s no reason to ignore the .500 S&W or for that matter the .460 either.  And I may be out of touch — it’s been known to happen — but I’ve never heard of the .50 Alaskan.

I’ve never hunted bear, but having hunted in Africa I know a little about dangerous game.  Understand one thing:  there’s a difference between hunting dangerous game — where your shot hits a body which isn’t expecting it — and stopping dangerous game, where you have to stop something weighing at least half a ton running at you with a quart of adrenaline pumping through its veins and homicide in its heart.   If you want to stop that beast, there needs to be a “.4” in the cartridge nomenclature, and “.5” is better, but not many people can handle the recoil of the latter, me included.  Also, a quick follow-up shot is more difficult when your rifle barrel is pointing at 12 o’clock after the first one.  Don’t as me how I know this (hello, .505 Gibbs and .500 Nitro).  Bullet weight should be in the 400gr-500gr range.  Dave Petzal has the truth of it, here.)

Here are the cartridges I would consider as bear-stoppers, divided into rifle and handgun (and handgun only because you can’t always carry a rifle).  I’ve left off the Nitro Express and exotic cartridges from Dakota, STW and Lazzeroni simply because you’re less likely to find them at Bubba’s Bait ‘N Bullets out in Nowhere WY

And now the marginal stoppers:

Now for the handgun cartridges (the list is much shorter):

…and the marginal choices:

Don’t even think about the Magnum Research BFR in .45-70 Govt, because shooting the heavy and fast Buffalo Bore loads will end in wrist reconstruction surgery.

Speaking of the XVR: 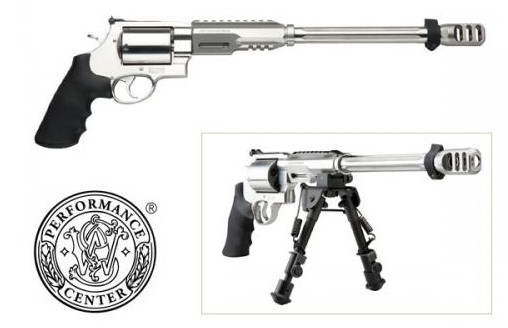 I would respectfully suggest that if you’re going to carry that beast around, you may as well carry a rifle.