One of the few things about the Chinkvirus pandemic that has given me amusement is the panicked reaction from the Education Establishment against homeschoooling — you know, the dread fact that children’s education has slipped from their grasp and back to (where it really belongs) the parents.

Of course, the screaming and wailing is all utter bollocks, as City Journal‘s Max Eden explains:

It would be useful to know how homeschooled students perform academically compared with their public school counterparts. A 2017 literature review, focusing only on peer-reviewed articles, found that the majority of studies showed positive academic, social and emotional, and long-term life outcomes. Bartholet dismisses much of this literature, noting that it tends to focus on a not necessarily representative sample of homeschoolers who “emerge from isolation to do things like take standardized tests.”

Eden takes this apart for the nonsense it is:

James Dwyer, co-organizer of the event, has declared that “the reason parent-child relationships exist is that the state confers legal parenthood. . . . It’s the state that’s empowering parents to do anything with children. To take them home, to have custody, to make any kind of decision about that.”
Such sentiments would horrify most parents, and Bartholet’s proposed ban on homeschooling would never win at the ballot box, as she knows. She laments how the Constitution “with its negative rights structure is an anomaly, outdated and inadequate by the standards of the rest of the world.” But she expresses hope that litigation campaigns may lay the groundwork for an eventual national ban. It wouldn’t be the first time that coordinated progressive litigation has yielded profound, counter-majoritarian policy change. With elites like Bartholet and her colleagues pushing their vision of family subordination to the state, homeschool parents have good reason to be on guard.

Yeah, that damn antiquated Constitution and its “negative rights structure”.  For those of you either ignorant of or impatient with academic-speak, what this foul woman means is that she would prefer a constitution which lets the State tell the citizens what they may do, as opposed to our Constitution which says that government  may only do this and that, and the rest is up to We The People.

Her preference is always the default position with statists, tyrants and dictators.

Were it not for that “negative rights structure”, I’d suggest that Bartolet be punished or at least censured for wanting the State to take parents’ rights away;  but there’s that annoying little First Amendment thing which affirms her inalienable right to utter anything she wants — even dangerous bullshit like this.

And I have the right to call it “dangerous bullshit”, protected by that same outdated principle.  And the right to tell her to fuck off and die.

Peter Grant has a post about equipping and handling a rifle, and there’s not a single thing he says that I disagree with.  An excerpt:

It’s easy to say, “I can get rounds on target out to 500 yards” – but that’s probably not true in all circumstances. On a square range, on a calm, sunny day, with no interference or distractions, and a well-braced position, and using good optics, perhaps you can. Now, take a wild, stormy, windy day, with you out of breath, panting and puffing, sweat running down your forehead and into your eyes (having just run a couple of blocks to get away from trouble, with “bad guys” in the offing who are after you, and your family bunched behind you with the kids screaming in fear because they don’t know what’s going on), and you with just “iron sights” or a red dot sight on your close-combat carbine, and no time to take up a settled, stable shooting position . . . now make that critical shot, at whatever range. Go ahead. It’s only your life at stake, and your families’ lives.

Absolutely true.  We had guys in our unit who were absolute monsters on the range, but when faced with serious trouble, it all went to hell in a hurry.  This is also why I know I was a far  better handgun shooter back when I did timed IDPA drills every week, as opposed to the leisurely range sessions I do now.  I went from “average” to “much-better-than-average”, and now I’ve slipped back to “marginally-better-than average” (to be extremely charitable).  What I do know is that the habits I picked up from all those hours of IDPA drills are still there, and can be resurrected (even if a half-second or so slower) in a pinch.

Peter’s thoughts about maintaining your battle rifle are also why I prefer the AK-47 over the AR-15:  throw an AK in the mud, drop it off the back of a truck, and it’ll still shoot.  Good luck doing that with your AR-15, with all its electronic doodads and plastic furniture.

And if you don’t own a copy of Jeff Cooper’s Art of the Rifle, that should be your next book purchase.

Here’s an easy one. We all know that this pic of some Miss Universe (1952) contestants contains something “wrong”.  But time yourself to see how long it takes you to discover it. 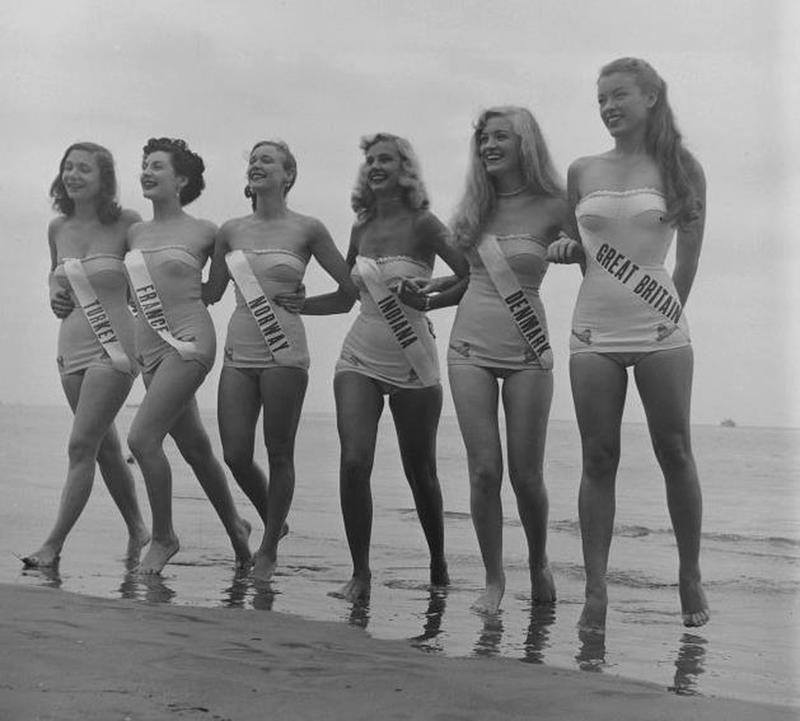 If anything good has come out of the Chinkvirus pandemic, it’s this:

A comprehensive study of behaviours and attitudes since the outbreak began found that three in five people will stop greeting friends with a hug and a kiss, and will also avoid crowded places in the future.

Include me in that number, although I hardly ever did it anyway.  This modern thing of men hugging other men who are not family has always given me the heebies.  I hug my son — and not even that often — and occasionally my friend Trevor (who insists on doing it because he knows it bugs me, and I don’t kill him because he’s my friend).  Other than that, ugh.

I don’t mind shaking hands, however, because I was brought up to do that with men, further affection being communicated by a punch or slap on the shoulder.

But not with women.  Unless it’s a business thing, I’m always tempted to turn a handshake with a woman into kissing her hand;  mostly, it’s greeted with giggles and sighs.  If I add, “Sorry, but I was brought up to love and respect women,” the response is universally positive.  Hugging is too intimate;  kissing a hand denotes respect.

As for hugging and kissing women I know… well, I’m never going to stop doing that.  (At the doctor’s the other day, I complained to his nurse practitioner — whom I’ve known for over fifteen years — that I wasn’t going to molest her as I usually do when I visit.  She shook her head sadly and said, “And I always look so forward to it, too.”  Aaah, Texas.)

Ultimately, though, I think that for the next few years we as a society are going to be more comfortable about keeping other people — and certainly strangers — at arm’s length, so to speak.  And that’s a Good Thing.  But as time passes, we’ll forget all about pandemic behavior and relapse into over-familiarity, which isn’t.

Some smart guy has published a list of “Lockdown Reading” (as an alternative to watching yet another content-thin TV documentary series or gloomy Scandi-cop drama on Prime or Netflix).

I myself am currently two-thirds of the way through the John Masters Loss Of Eden trilogy (still one of the finest Great War novel series ever published).  For you Kindlers, they are here — the chronological order being Now God Be Thanked, Heart of War, and By The Green Of The Spring.  Forget trying to get them in paper- or hardback.  It took me about five years to collect my hardback copies, combing military second-hand bookstores over three states.

Achingly sad, wonderfully funny, sometimes within the space of a couple sentences.  As soon as finances improve, I’ll be adding to my collections of each series.  Start with either Goshawk Squadron (WWI) or Piece of Cake (WWII), depending on your favorite war.

Mick Jagger has called out Paul McCartney for claiming The Beatles were bigger than The Rolling Stones.  The singer, 76, hit out at the Hey Jude hitmaker, 77, for suggesting The Rolling Stones copied whatever The Beatles did during their time as music rivals.
‘The big difference, though, is that The Rolling Stones is a big concert band in other decades and other areas when The Beatles never even did an arena tour. They broke up before the touring business started for real…  They [The Beatles] did that [Shea] stadium gig [in 1965].  But the Stones went on.  We started stadium gigs in the 1970s and are still doing them now.  That’s the real big difference between these two bands.’

Of course, ol’ Mick is showing signs of senility — or at best, selective memory.  As Paul pointed out:

‘I love the Stones but The Beatles were better.  Their stuff is rooted in the blues. Whereas we had a lot more influences.’

Paul’s being kind.  The Beatles created influences while the Stones just kept on playing their garage-band versions of blues.  And when the Stones didn’t do that, they copied the Beatles, as Paul noted:

Suggesting the Paint It Black hitmakers began to copy the Beatles, Paul added: ‘We started to notice that whatever we did the Stones sort of did it shortly thereafter.
‘We went to America and had huge success, then the Stones went to America.  We did Sergeant Pepper and the Stones did a psychedelic album. There was a lot of that.’

‘One band is unbelievably luckily still playing in stadiums and then the other band doesn’t exist.’

Jagger’s confusing longevity with talent, which is like saying that Leonard Bernstein was a better composer than Mozart because he lived longer.

The Beatles broke up because they had three unbelievably-talented creative musicians who wanted to go their own way;  the Stones only ever had Keef as their creative source, so they were never going to break up:  since Let It Bleed, their music has always been about making money, not about the music.  And Keef, as he’s always admitted, is and always has been a blues musician.  Lennon, McCartney and Harrison played pretty much every kind of music — and created their own forms as well.  The Stones have never done that, ever.

Stick to prancing around the stage in skintight yoga outfits, Mick.  Nobody does it better.