For those who’ve seen Band of Brothers, there’s a very telling conversation between Carville and Winters, as the sergeant complains about his platoon commander, Lt. Dyke:

“It’s not that he makes bad decisions;  it’s that he doesn’t make any decisions at all.”

Any time you see that situation in a manager, any manager, it is a flashing neon sign of incompetence.

One of the reasons why Marxists make such poor managers is that if they are presented with a situation which cannot be addressed by Party doctrine, they are largely indecisive.  Even worse, if that doctrine runs counter to good management, they will use that as the underpinning for their indecisiveness.  We saw this a lot under Obama, who was pathetically underqualified as a manager, having had no executive experience in his entire life before becoming POTUS.  More often than not, when faced with a decision, he simply froze and allowed events to dictate the outcome, even if that outcome was inimical to the interests of the country he was supposed to be governing.  (And to prove my point above, his Marxist doctrine held that the United States was a malignant force in world affairs, so allowing harm to befall the country was — to his mind — actually the proper thing to do as it “corrected” or atoned for America’s past sins.)

And of course, today we see the same thing happening in New York City, where the doctrinaire Marxist Mayor De Blasio faces a situation of riots, looting and general lawlessness and mayhem on the city’s streets.  Bob McManus at the NY Post  sums it up perfectly:

In 1991, anti-Semitic rioting in Crown Heights took two lives and then ran for three full days and nights — allegedly with the approval of then-Mayor David Dinkins. He denies he let it run, but the fact is that when he finally ordered his deputy police commissioner, Raymond Kelly, to end it, it ended.
So even belated firmness works.
But in December 2014, ever-escalating anti-cop protest turmoil was tolerated — even wink-and-nod encouraged — by de Blasio’s City Hall. Each day was more violent than the one before — and it didn’t end until a suicidal lunatic drawn by the disorder opened fire on two cops sitting in a patrol car in Brooklyn, killing them both.
Feckless acquiescence of the sort we’re seeing now bred tragedy — and worked only insofar as the shock of the assassinations took the steam out of the demonstrations, and they faded on their own.
So there are two models here.

– De Blasio can go the firmness route — and Cuomo, who has never before hesitated to interfere in the mayor’s business, can back him up. That is, if need be, he can force de Blasio’s hand.
– Or they both can stand by and let the rioters roll.

Then there will be more looting, more burning, more victims — and an ever-escalating sense that the city is incapable of preserving the public peace and that it lacks the courage even to try.

And the reason I can be so confident of my prediction is that De Blasio’s Marxism puts him on the side of the “people” — in this case, the rioters and looters who are either protesting racism — which he has to  support — or else going after The Man (looting Macy’s and redistributing wealth) — which he also supports.  (That he would have the tacit support of his state’s neo-Marxist Governor Cuomo is likewise a given.)

I should point out, seeing as I started with a historical anecdote, that the situation we now face in New York and other socialist-Democrat cities is pretty much the same as Chile faced during the presidency of Marxist Salvador Allende.  Unfortunately, Donald Trump is no Augusto Pinochet (as much as his Marxist opponents would like to paint him as such), so it is unlikely that what saved Chile from Communism will be replayed here, to save the United States.

But tell me that the thought of Mayor De Blasio being tossed out of a helicopter at 2,000 feet over Long Island Sound doesn’t give you at least a mild frisson  of pleasure… 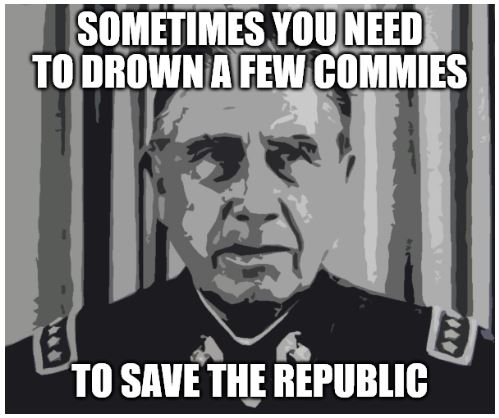 Lest anyone think I’m being too radical, let me point out that if the Marxists could do it, they’d do it to you.  Except that they don’t do small stuff like helicopters;  no, they have things like gulags, “education camps” and insane asylums for their opposition — i.e. oppression and suppression on a mass scale.

And if you don’t believe me, I have a New York City bridge to sell you — if it’s still standing and hasn’t been burned up yet, that is.

Interestingly enough, what we need now is not leadership of the Dick Winters type:  cool, cerebral and logical.  No, what we need is more Lt. Ronald Speirs:  get in and get the job done, regardless of how many assholes you have to kill.