So having taken back the U.S. House, the Socialists are starting to feel their oats:

WASHINGTON — A Democratic congressman has proposed outlawing “military-style semiautomatic assault weapons” and forcing existing owners to sell their weapons or face prosecution, a major departure from prior gun control proposals that typically exempt existing firearms.
In a USA Today op-ed entitled “Ban assault weapons, buy them back, go after resisters,” Rep. Eric Swalwell, D-Calif., argued Thursday that prior proposals to ban assault weapons “would leave millions of assault weapons in our communities for decades to come.”
Swalwell proposes that the government should offer up to $1,000 for every weapon covered by a new ban, estimating that it would take $15 billion to buy back roughly 15 million weapons — and “criminally prosecute any who choose to defy [the buyback] by keeping their weapons.”

And when he got some blowback, the little turd went full Stalin: 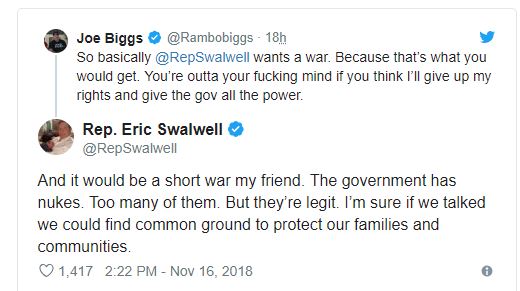 It is a recurring fantasy of socialists that they can disarm Americans without too much difficulty.  Of course, we know that’s not true, and if the FedGov were ever to try it, the cost would be prohibitive (in so many ways).  And for the record, let’s forget all about nukes.  That’s just a wet dream on the part of socialists like Swalwell;  they want to wish the problem away with a wave of a magic wand — it’s a recurring fantasy of theirs for just about every issue — and “nukes” is just a shorthand.

Where this socialist scumbag and his ilk are dangerous is this bullshit talk of “common ground”.  Let me make this clear:  between gun owners and gun confiscators, there is no common ground.  It’s the same with the “commonsense gun control legislation” that they bat around:  there’s no such thing.  Every single piece of legislation suggested by gun controllers has one, and only one goal in mind:  the eventual disarming of the American people.  They can protest all they want, but we know the truth of the matter, which is that all gun control legislation is incremental, because they know that sweeping gun control (confiscation and disarmament) just ain’t gonna happen, dreams of the Swalwell types notwithstanding.

It is quite possible that gun confiscation might have some small success — e.g. in Swalwell’s own district (see below), where the incidence of legal gun ownership is probably quite low and the  Socialist-majority voting population might even support the idea of giving up whatever guns they have.  (And I know what you’re thinking:  nuking the 15th district, and especially with the concomitant fallout, would actually solve quite a few problems, but let’s not go there.) 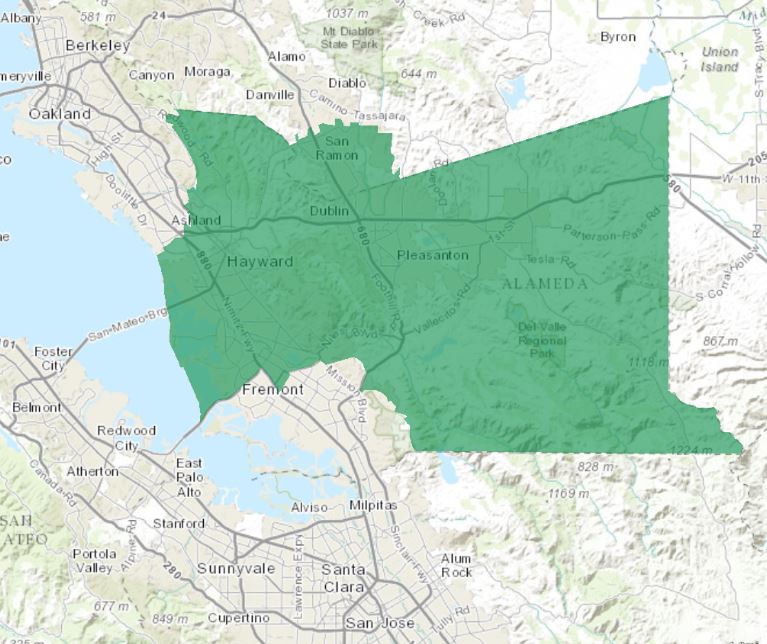 Also, Swalwell might have at his behest the loathsome assholes of the California State Police, who were so notably efficient in disarming households in New Orleans during the Hurricane Katrina floods.  So yeah:  it’s quite feasible that confiscation could work there.

In North Texas, not so much.  In the first place, the would-be confiscators would have to overcome Texas political sentiment about guns — good luck with that — and according to our last county sheriff, the confiscating force would first have to go through his deputies to get to our guns.  And I’m sure that north Texas isn’t alone in this attitude, not just in Texas but all over the U.S.

We don’t have to worry about gun confiscation, the wet dreams of pissants like Swalwell notwithstanding.  What we have to worry about is, as I said above, all the “reasonable” gun control legislation such as, for example, legislation that would limit the type of gun you can own, or equally bad, limits on things like the amount or types of ammunition you can own, or whether you have to register with government as a “gun owner” before being able to buy it.  (Don’t laugh;  that’s the situation that faces  Californian gun owners right now.)

Did I already mention that today is National Ammo Day?

Let me offer a little additional advice:  if you don’t already own a semi-automatic rifle (and we all know what I mean by that), you might want to improve your gun collection by buying an AK-47, AR-15/20 type, SAR-58 or HK-91 (to name but some options) — and buy it today (along with a “sufficiency” of ammo for the rifle, of course).  Send me an email if you want some more details.