Oooooh I love this development (via Insty, thankee as always):

CZ-USA, the U.S.-based affiliate of Czech firearms manufacturer Česká zbrojovka a.s. Uherský Brod (CZUB), announced today plans to locate their North American Headquarters and build a new manufacturing facility on approximately 73 acres at the Port of Little Rock. CZ-USA plans to implement a two-phase approach with an investment of up to $90 million and create some 565 jobs over a six-year period. CZ products are considered some of the highest-quality firearms in defense, competition and sport shooting around the world.

Indeed they are.  I’ve owned several CZ / Brno guns in my life, and the only thing I can say is that I’ve regretted selling (because:  poverty) every single one of them.  In fact, here’s my list of Four CZ Guns I Would Own In A Heartbeat (in no specific order):

It is quite probably the most popular dangerous game rifle in Africa.  Arrive at any safari camp with one of these bad boys, and the guide / PH will nod his head approvingly.  Back in a previous life, I used a borrowed 602 (chambered in .458 Win Mag) on a large lion, with astonishing results.  (As the saying goes:  “The .458 Winchester Magnum:  delivering pain in equal amounts at both  ends of the rifle!”) More recently, the Cape buffalo head which fills most of a wall in Doc Russia’s den came from a beast taken with his .375 H&H 550.

I prefer the “hogsback” stock over the straight “American” style, but regardless of stock, the 557 (old: 550) is quite possibly the greatest rifle to be had anywhere for the price, and the single-set trigger (4lb pull to 3.5 ounces, with just a single forward push on the trigger) is beyond reproach.  My 550 was chambered in 6.5x55mm Swedish, I sold it to a Reader because poverty, and I’ve regretted it ever since.  (However, he tells me that he’s taken many, many  deer with it since, so I don’t feel too bad.)  What I love most about this rifle is that you can pick pretty much your favorite chambering (even the new 6.5 Creed!), and CZ makes it. 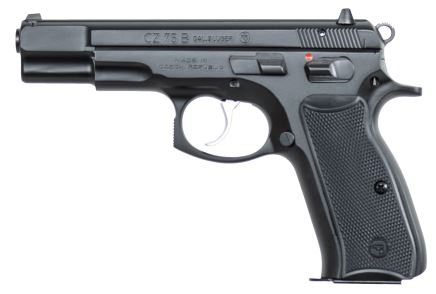 I have spoken before of my respect for this wonderful pistol, so no more need be said.

And now a bonus:

This was made by Brno before CZ bought them.  CZ doesn’t make the little 611 takedown rifle anymore [sob] , and that’s a pity, because it is the only rifle I’ve ever picked up and shouldered where it immediately felt like it was an extension of my arm.  Want, even second-hand.

So welcome, my friends* at Česká zbrojovka Uherský Brod (CZ-UB).  Sorry you ended up in Little Rock instead of in my state, but hey… we’re almost neighbors (in Texas-distance terms, barely a couple 6-packs up Interstate 30), so expect a visit as soon as you open your doors.  (One question, though:  why did CZ-USA move out of Kansas City?)