We’ve come across this foul bitch before.  Fresh from her “triumph” of having a conservative guy ejected from a gym, Georgetown professor Christine “Anything But” Fair is back in the news, unfortunately:

A professor at Georgetown University known for making incendiary comments against supporters of President Donald Trump said white men deserve “miserable deaths” for supporting Supreme Court nominee Brett Kavanaugh.
C. Christine Fair, an associate professor at Georgetown in the School of Foreign Service, tweeted Saturday, saying white Republican men should die and an added bonus would be if women “castrate their corpses and feed them to swine.”

This folks, is what happens when you’re so ugly you can’t even get a pityfuck at a drunken frat kegger. 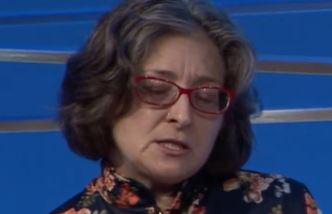 And her Ugly isn’t just on the surface;  it permeates her entire being.

Yet she’s still employed at Georgetown, which used to be a reasonably-prestigious university.  Now it seems that the place is as fucked-up, rancid and poxy as this example of its academia.  Maybe they’re proud of her, which makes a sick kind of sense, I guess.