Via Insty, I read this little snippet [NRO link warning] and I confess to being a little bit puzzled.

If some ugly harpy came up to me in, say, a restaurant (forget that gym nonsense), and screamed: “I find your presence in this [place] to be unacceptable, your presence in this town to be unacceptable”, I’d tell her, politely, to fuck off because her opinions are of no importance to me or anyone else. Then if she persisted in her bullshit, I’d punch her in the face because, quite frankly, she’s nothing more than a bully, and I’ve found that bullies become somewhat less bully-ish when they encounter violence coming from their intended victim.

In the case of this particular harpy, a punch in the face would not affect her appearance much, and may even be an improvement: 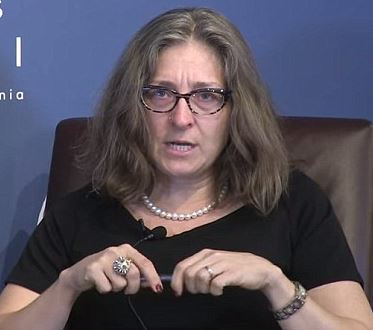 Why do all these liberal fanatics get that pinched, unattractive look? I call it the Perpetual Scold, which somehow manages to incorporate a wagging finger into a facial expression.

“Oh but Kim,” you might say, “she’s going to sue you for assault!” Maybe so, maybe not — there’s a good chance I could plead self-defense in the face of such a verbal attack — but whatever; I might be sued, but she’d still have massive facial injuries.

And in future, maybe her little liberal buddies might be a little more civil, even polite, lest something similar happen to them when they start berating someone with whom they disagree. (In classical terms, this approach is called “Pour encourager les autres.”) Or, as some dickhead ex-President once put it: “Punch back twice as hard.”

We need to see more of it from conservatives, but unfortunately, conservatives seem to have this ingrained politeness and deference when treating political adversaries, and especially so if they’re women. (I know I do; believe me, I’d punch Professor Fair in a mood of utmost sadness and reluctance.) But we need to get over this reticence because gawd knows, the Left has none.

Update: The folly of my reaction has been pointed out to me in Comments, and I am advised that mockery would be a better course of action. So:

…would be met with:

“Hey… it’s not my fault that you can’t get laid, you bitter, ugly bitch.”

Then, if she were to attempt to strike me, I’d go with Plan B (see above).