So here’s something to get you in a cheerful mood before the long weekend:

Police warn it is no longer safe to walk and talk on your mobile as scooter gangs pocket £2,000 an hour from drive-by phone snatches

As officers battle an epidemic of moped muggings, police are now warning the public not to stand on a curb or street corner with their phone in their hand or risk having it torn from their grasp by thugs who can sell on a single handset for £100.
Up to 50,000 offences a year are being committed by thieves on scooters and mopeds in the capital, while some teenage thieves are being arrested up to 80 times but not sent to jail.

Well, that last sentence is yer problem right there, innit? You stupid idiots. Especially when you have a situation such as seen in the pic below: 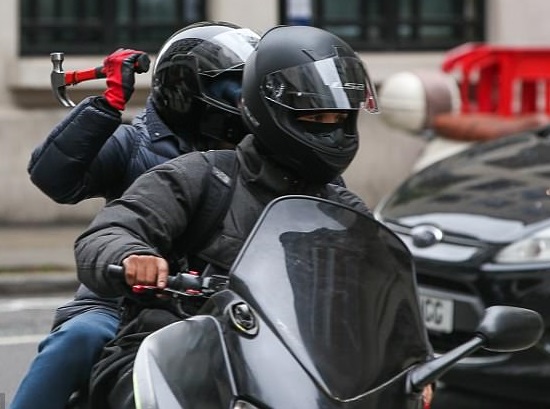 Somebody explain to me how this doesn’t constitute armed robbery, and why this little thug and his buddy do not qualify for at least ten years in jail? (Somebody from Britain, I mean. My US Readers are baying like a pack of hounds at this travesty.)

Over the last 12 months a total of 15,100 mopeds and motorbikes were stolen in London compared to 10,704 the previous year.
Gangs of mainly teenage boys can steal scooters by simply breaking their steering locks.
Detectives are targeting at least 500 known offenders behind the spree.
Yesterday Superintendent Payne compared the desirability of mopeds to thieves as the ubiquitous Ford Cortina in the 1980s, saying: ‘This is the Ford Cortina of the 21st century, they are easy to steal and when we spoke to the manufacturer they said they can fix the problem but it’s going to be three or four years away. They are in the Ford Cortina bracket, you do not need any skill to ride them, you don’t even have to change gear.
‘The theft is all done on a stolen bike. Thieves can steal these bikes in less than 60 seconds, it’s really quick. [They] take hold of the handlebars and break the steering wheel lock by pulling it, it’s like a lump of metal. Most bikes are then stolen by just walking it round the corner and they either sell it on or use it to commit crime.’
The warning come after a spate of muggings in central London, with riders using weapons such as machetes and hammers to intimidate and injure their victims as they try and snatch their mobile phones.

I would probably end up in jail after intervening in one of these little romps.

How, you ask? Imagine having just nicked some fool’s phone out of his hand, and you’re driving off on your stolen moped feeling proud of yourself, when some old geezer (that would be me) steps into the street in front of you and smashes his thick wooden cane* across your face, causing you and your thieving buddy to crash and spill into the road like a broken bag of vegetables. Then said geezer runs over to you while you’re lying there stunned, and starts to put the boot into your ribs, and when he’s done with you, tries to rip your little hammer-wielding friend’s head off his body by pulling his helmet violently around in a full circle. And then things start to get seriously violent.

It’s probably a Good Thing that I’m spending only a little time in London, because otherwise I’d be spending a lot of time in London, if you get my drift. Because while these little shits are obviously part of a “catch and release” program, I have no doubt that I would qualify for a very stiff sentence.

Can’t be endangering the lives of violent criminals, after all. That’s against the law.

*Yes, I walk with a cane when I’m Over There, because my gouty toes start to ache after I’ve walked more than half a mile on city sidewalks, and I need the support.