Yesterday marked the 30th anniversary of the beginning of the infamous Siege At Ruby Ridge, Idaho, where Federal agents shot and killed Sammy Weaver, a guiltless 14-yer-old boy and later on, his mother Vicky by shooting her in the face as she was standing in a doorway, holding her baby daughter in her arms.

Even though the shootings were classed as “constitutional” (!!!) by the FBI, the agency nevertheless paid husband Randy Weaver — the original target of the siege — $3 million after a civil lawsuit.

As this article in American Greatness points out:

[FBI agent Lon Horiuchi] shot and killed Vicki Weaver, who was unarmed, and neither accused nor guilty of any crime. For embattled Americans in 2022, it would be a mistake to regard this assault as a one-off.

“Desire to wage war on ordinary Americans—to disadvantage them and even to kill them—had long been bubbling in the ruling class’s basements,” wrote Angelo Codevilla, citing documents such as Hot Spots of Terrorism and Other Crimes in the United States, 1979-2008. This Department of Homeland Security study classified persons judged “suspicious of centralized federal authority” and “reverent of individual liberty” as “extreme right wing terrorists.”

As the man said, it’s not really paranoia when they really are out to get you.

…or, How the Cops Become Robbers (15-minute video by Steve Lehto, sent to me by several Readers, thankee).

I remember this raid, and I was enraged back then.  Don’t ask me how I feel now.

So much for the “uphold the Constitution” nonsense.

The hits, they just keep on coming…

So by now we’ve all heard about the raid on Trump’s Mar-A-Lago house, and of course they did the full stormtrooper thing, despite appearances (or maybe because of them, see below).

And then they let loose the 7th IRS Panzer Division on him too.

After all, one might ask:  if the Swamp Stormtroopers can do all this to a former president, is anyone (other than Hillary Clinton) safe?

Joel Pollak says that this was why his family left the thuggish apartheid South Africa.  Wasn’t my first reason, but was certainly 1a, seeing as I myself had been a minor target of those assholes for years.

Here’s my theory.  The Stasi apparatchiks  know they won’t find anything incriminating in whatever papers Trump’s been keeping at Mar-A-Lago.  What they are trying to ascertain, methinks, is whether their actions will provoke a sharp (read: over-the-top, like Jan 6th) response from Trump supporters.  This is the American Socialists’ Reichstag Fire:  a manufactured provocation.

My advice:  ride this one out, don’t get upset, keep our eyes focused on the November elections.  If there’s a massive outcry — demonstrations or worse — from conservatives after the Mar-A-Lago Incident, it would be a handy excuse to declare a state of emergency and either block or somehow nullify the elections, leaving these assholes with control of the House and a tied Senate.

Don’t let them con us.  Keep outwardly cool, but keep the anger simmering, and let’s buy more ammo and guns.

By the way, RedState’s Bonchie agrees with me.

I have to admit, when I saw the “Dark Brandon” poster, I thought it was an inspired tongue-in-cheek satire from the Babylon Bee: 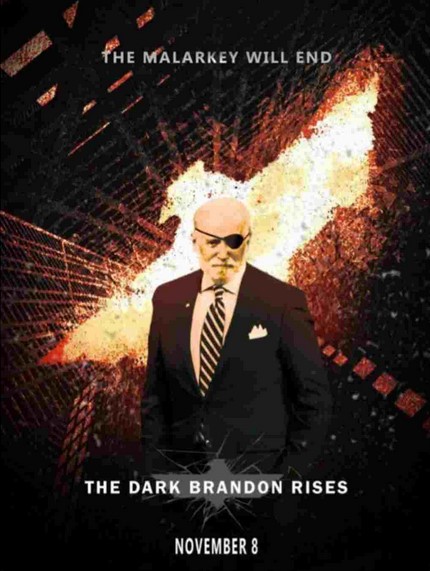 The real Biden can’t even rise to an occasion.

That said, if it means that the gloves are going to come off and his minions (FBI, DOJ, ATF etc.) are going to go Full Totalitarian on us…

If you’ll excuse me, it’s time for a little range session.

We have a 3-for-1 series of quotes today:

From former Hong Kong governor Sir John Cowperthwaite, talking about his refusal to let his government collect data from the population:

“If I let them compute those statistics, they’ll want to use them for planning.”

From Eric Erickson, speaking about the BidenReich and the latest example of its bastardy:

“The only good bureaucrat is one with a pistol to his head. Put it in his hand and it’s goodbye to the Bill of Rights.”

Never more true than it is today.

In the Kurt Russell movie Tombstone, Wyatt Earp catches a guy whipping a horse in the face — whereupon he snatches the quirt from the man’s hand and whips him across the face, and when the oaf whimpers Earp says quietly, “Hurts, don’t it?”

Over the weekend, about half a dozen people sent me this video of someone getting a taste of his own medicine;  and I have to warn you now, if at the end your Schadenböner isn’t straining at your zipper, we’ve can’t be friends anymore.

Sorry, I have to go and watch it again;  I am so weak…

Fixed the link, thanks for the heads-up.