Yesterday, I expressed my consternation at this little event — which took place not a mile from where I am right now, and where I drive through all the time:

In the incident, which occurred last week, BLM marchers illegally blocked a public street, trapping motorists. Such situations have happened across the nation over the past year, often resulting in violence. In the Plano video, one man emerges from his car and yells at the BLM protesters to clear the street. They not only do not clear the street, one of them also brandishes a weapon of some sort at the man. A Plano police officer looks on, does nothing to clear the street, and instead seems to side against the motorist — who is legally in the right.

Looks as though the Plano Police Chief has landed himself in the doodoo with TXAG Paxton: After reviewing the incident, our First Lawyer had this to say: 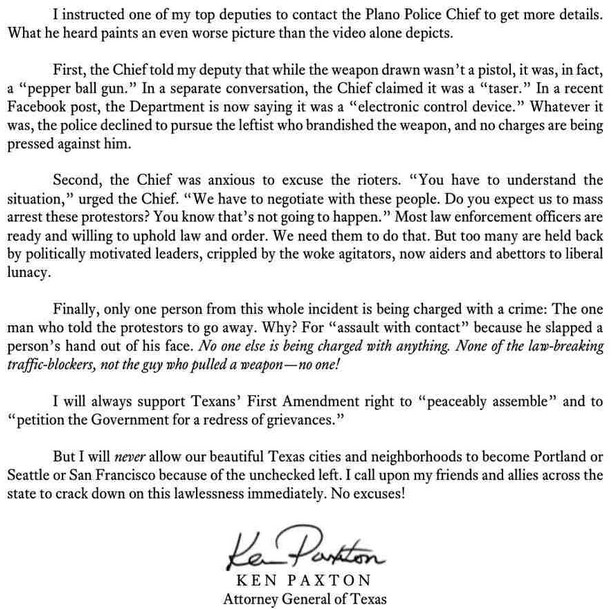 Reckon it’s time someone got fired — and I’m not talking about Paxton.

Frankly, I don’t care if you think you have to “negotiate with these people” when in fact they are breaking the fucking law.  If I’d parked my car across the intersection and refused to move it, how long do you think it would have taken for the Plano PD to have me in cuffs?  Or, if there were four of us White boys blocking the road with our cars protesting (say) the stolen election of 2020, the fuzz would have descended on us like Genghis Khan, only with better weaponry.  And if one of us had pointed something that looked like a gun — I don’t care whether it was a pepper gun, taser or toy pistol — the cops would have shot his ass dead.

And all of Plano would probably have applauded.

Let me get this straight.  While Plano is more conservative than Dallas, it’s not as conservative as the rest of Texas (thanks to the huge influx of New Yorkers, Californians, Chinese, Indians and Pakistanis into the area as we’ve become some kind of Mecca [sic]  for the Big Business flight away from, duh, California and the Northeast).  We have a Black mayor, a Black police chief, several Blacks, Chinese and Indians on the city council and school district board, and all the rest of the stuff that has allowed the hallowed “diversity” to flourish, only without any fanfare or box-ticking.

Nevertheless, Plano is still reliably conservative, and up until now, the Police Department has been too, with a strong law-and-order attitude which we citizens of Plano have supported to the hilt.

And now?  A police chief who bleats about “having to negotiate” with violent criminals?  I don’t care if the police are “caught in the middle”;  that’s their fucking job.  They are supposed to be the “thin blue line” between law-abiding citizens and criminal bandits.

Like I said, someone needs to be fired, or else the shit is really going to hit the fan.  Next time, the guy who jumps out of his car and, all by himself, shouts at protesters to clear the street, may well be carrying a handgun, or more.  (There’s a very good reason that our local gun store shelves are empty of both guns and ammunition.)  And if the cop on the scene — or his boss — aligns himself with the criminals, don’t be surprised if he’s treated like one of them, because it’s no less than he deserves.

And if the city cops are unable or unwilling to do their job, Paxton has only to unleash the state police and, gawd help us, the Texas Rangers.  We’re cool with that, I think.

This bullshit has to stop, nipped in the bud right now.  Let’s hope that Paxton gets it done, or there’s going to be a serious shit show.  Plano is not fucking Los Angeles or Chicago or New York;  we’re not even fucking Austin.  And without serious action, the powers that be are going to find that out, big time.