Over at AmmoLand, Jim Grant lays down some smack on the .38 revolver as a carry piece:

Despite the fact that revolvers are among the most recommended carry guns for new and female shooters, they aren’t all great choices.
Don’t misunderstand me, I’ve owned and carried revolvers for years. While six-shooters absolutely have their place in a shooter’s arsenal, they’ve often employed wrong. This isn’t to say that they’re a bad choice when shoe-horned into roles they weren’t built for, but more so that a combination of factors have caused some of their most shining moments to eclipse. Paramount among these is the .38 special snub-nosed revolver. Compact, reliable and fool-proof, the .38 wheel-gun should be the perfect concealed carry option for new shooters – but it’s not.
Here are four reasons why it’s not.

…and I’m not going to argue with any of them.  Here’s an example of the offending article: 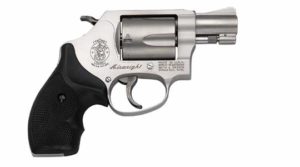 I carry this S&W 637 as a backup most of the time — with the occasional exception being for a 2-minute trip to 7-11 to get lottery tickets — and I’ll also confess to not practicing with it as much as I used to (now, maybe once a month or so instead of twice a week).  The only weekly practice involves dumping shells and reloading with a speedloader (I keep ten empty casings around for that specific purpose).

Even with this amount of practice, the time from last shot fired to next shot after reloading is about seven seconds — compared to just over four seconds with my 1911.  (The time includes retrieving the speedloader / fresh 1911 mag from my left-hand pants pocket, because that’s typically where I carry them.  Real-world stuff.)  That’s not combat-adequate, of course, but in reality you’re not going to need more than what’s already in your gun to end the threat, one way or the other.  If the ChiComs were to invade, we can talk about adjusting to that threat later.

I’m not too worried about my accuracy with the 637 because it’s not bad, and the 637 is a halitosis-range gun anyway. which is just as well because even shooting “only” .38 Spec+P ammo, alloy-framed snubbies have an astonishing amount of kick;  which is why I’m idly thinking of replacing the 637 with a steel-framed Model 60 at some point, or maybe just going with a 4″-barreled 627 in .357 Mag instead: 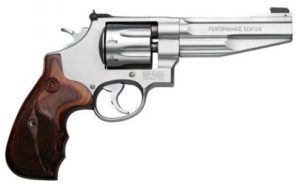 …the other reason being one of Grant’s points, viz.  the terminal ballistics of a .38 Spec bullet coming out of a 1.5″/2″ barrel are just awful.  Even with a decent bullet design, you’re asking a lot from a snubby — which means multiple shots and only five rounds in the cylinder — but then again, the 637 is my backup  carry piece.

I guess the point to all this is that snubbies are really just backup, and not primary carry pieces, and that’s how I’ll continue to treat mine.