Several people have written to me about Colt’s re-release of the venerable Colt Python.  From the horse’s mouth: 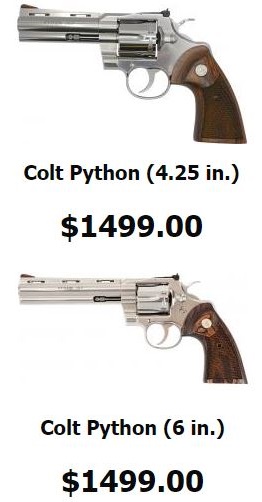 Anyway, I can’t wait for the gun mags to review the new Python.  What I’d really  like to see is some intrepid reviewer doing a side-by side comparison of an old 1970s-era Python with the new one, to see if Colt will be manufacturing guns to the same degree of quality as they did back then.

I don’t want to be all negative and stuff, but something in my water tells me that’s not gonna happen.

But just to be perfectly clear on this:   as a HUGE fan of the Python revolver — I still have my old 6″ Python holster, against the day when I get another one — I will be the happiest man in the world to be proved wrong.

Some of you may be wondering, if I’m such a Python groupie, why I ever sold my old one: 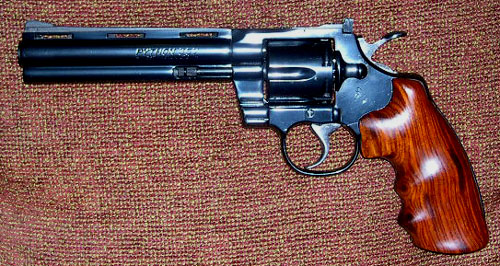 Answer:  I didn’t sell it.  I shot it till it broke, irretrievably:  frame bent, cylinder busted, the full catastrophe.  Only the barrel and trigger assembly could be salvaged for parts.

It was the finest handgun I’ve ever fired, by a day’s march — and believe me, I’ve shot a LOT of damn handguns in my life.

I still mourn its passing.