A little while ago, I asked why the Daily Mail  only features Train Smash Women Partying in northern British cities, and got this thoughtful email response from Reader Pippa D:

I believe it’s because the drinking areas and establishments in northern English cities are fairly centralised — Manchester, Deansgate; Newcastle, Bigg Market; Birmingham, Broad Street — for example. So the concentration of New Year drunks spilling out of local bars and clubs is greater. The party paparazzi duly get a lot of amusing/tragic photos as they are in the right place at the right time.
But in London, the drinking establishments are spread right across the city; they are spread across suburban areas too. Effectively, London is a swirl of lots of mini-towns with not one centralised ‘party district’. Not even Leicester Square, Piccadilly or Covent Garden. People party in Camden, Dalston, Clapham, Mayfair, etc. So if the paparazzi have to choose to wait for drunks outside a handful of pubs and bars in one small area containing only 3% of the overall nights revellers in the city, they might not get too much joy.
I don’t believe it’s a northern/southern British snobbery thing or politicised.

Makes sense to me — although I would suggest that pretty much any two-block area in London’s East End would yield similar results. 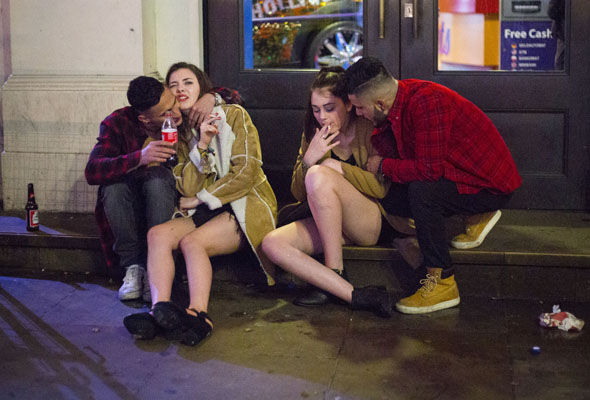 I also note, by the way, that the above pic came from the Daily Express, and not from the Mail.