…at least, finally, to the price of ammo.  From Eric at AmmoMan comes this offering: 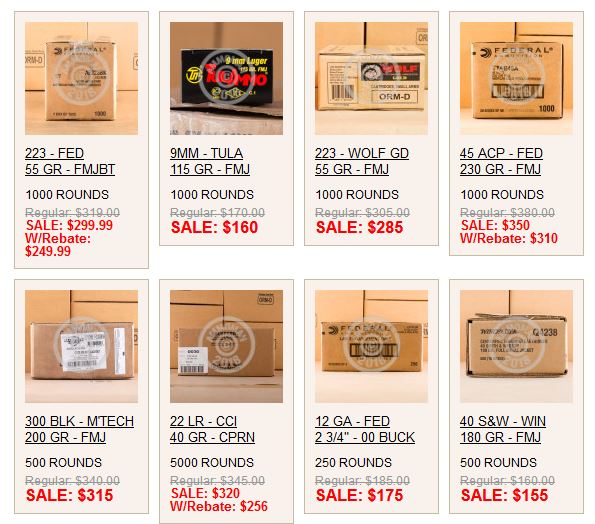 Y’all can do the calculations on the other calibers — I don’t have any guns chambered for ’em — but the per-round (non-rebate) prices are:

That’s more like it.  I can now suggest culling vermin with .22 ammo as the “7-cent solution” and not the “25-cent solution”, as during the Obama Years [shudder].

During the Happy Times (2001 – 2008), I urged everyone to buy ammo because those prices wouldn’t last.  I thought that the cost of ammo would go up if we elected a RatBastard Democrat to the presidency, but what I did not predict was that under CommiePres Obama, the huge sales pressure on the “popular” rifle calibers (5.56mm and 7.62x39mm) would cause serious shortages in the other  calibers as manufacturers retooled to meet the demand.  Hence the rationing of, say, .22 LR at places like Wal-Mart and Academy, and the complete disappearance of various calibers at local gun stores.

So let us learn from history, as we conservatives like to do, and buy ammo by the truckload during these, the Happy Times II.  That way, when the next Commie asshole president starts talking about “how much ammunition does a person need?” en route to setting purchase limits, we can say,  “Fuck you.”

Watch your Inbox — I’m on almost all the ammo sellers’ mailing lists, and you should be too — and take advantage of the low prices when they’re promoted.  (And try, where possible, to buy American — remember, asshole Commie politicians will always ban ammo imports when they can, so let’s try to keep our guys in business.)

As much as I like to promote National Ammo Day on November 19th each year, nothing would give me greater pleasure than to do so this year, only to be told:  “Shut up, Kim.  I have enough ammo stored for two generations already.”

Make me and Baby Vulcan proud.