I was truly saddened by the death of Steely Dan’s Walter Becker earlier this week, and I was going to write something about him and Donald Fagen when I remembered that I’d already done so back in October 2007. I found the piece, re-read it and cannot add a single thing to it. Here it is.

After revealing my love for the music of ABBA and the BeeGees last week, I got an email from a Reader:

Okay, I can’t believe you like that commercial crap, with your taste in classical music and all. What is your favorite kind of music then?

Leaving aside the classical music for a moment, to concentrate on errrr “modern” music, I have to say that I prefer complex music when it comes to pure listening pleasure.

“Favorites” is a loaded term, because in making that decision, it almost depends what I last listened to.

You all know about my “art rock” preferences (eg. Genesis, King Crimson, Yes, Happy The Man, and Jethro Tull), so I’m not going to talk about that stuff here.

Those who know my dislike for jazz, however, may be surprised by a band whom I absolutely love, and whose albums I have in their entirety: Steely Dan.

There is a need and a time for straight-ahead rock, and then there’s a time to enjoy the dense, complex music patterns of Messrs. Fagen and Becker.

I started off with Steely Dan’s Royal Scam album—I’d heard their earlier hits like Reeling In The Years, but for some reason I never got round to listening to their albums. Then, on a whim one day, I bought Royal Scam along with a couple of other tapes, to listen to on a long car trip I was taking.

For the next four days, the Steely Dan album was the only music I listened to—none of the others could hold up. To this day, if I hear a single song off the album, I have to get the CD out and listen to the rest.

Lots of words have been written about Steely Dan’s music, so I’m not really going to add many of my own to the chorus. Suffice it to say that whenever someone asks me to list my favorite songs of all time, it’s really difficult for me—because I can’t even list my favorite Steely Dan songs, so much do I enjoy them. The arrangements are tight and dense. I use the word “dense” a lot with their music, because there’s really no other way to describe the busyness—there’s always a lot going on with the instruments, but even within each instrument, all sorts of stuff is happening. (The next time Donald Fagen plays a straight major chord will probably be his first.)

And all the musicians who’ve ever played with Fagen and Becker have been artists and craftsmen of the highest order. To see exactly how good these guys were, you have to try and play a few Steely Dan songs—and I don’t mean an approximation of the song, I mean an exact copy of the song, to see how good these guys really were. I think I only ever managed a few: The Fez, Don’t Take Me Alive, With a Gun [duh], and Boston Rag. Players like Skunk Baxter, Lee Ritenour and Larry Carlton were the norm, not the stars—and current bassist Freddie Washington is beyond astonishing in his virtuosity.

But above all, one has to allow that Donald Fagen and Walter Becker themselves are brilliant musicians, and beyond-brilliant composers and arrangers. The cerebral, cultured Fagen and explosively-funny, irreverent Becker combine to make music that is… cerebral, cultured, funny and irreverent. And just to make things more confusing, they look like a pair of Ivy League college professors: 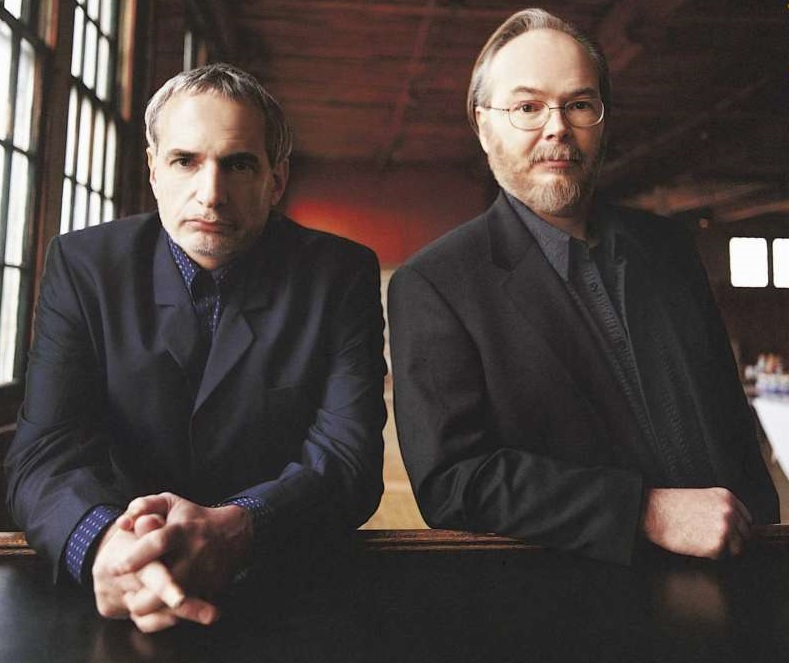 I’m also love with, in addition to the music itself, the wry, ironic feel to the lyrics and melodies. This is really unusual for me, because when it comes to that kind of thing, I’m an unashamed sucker and romantic. Hell, I’ve shed many a tear on maudlin ballads of the Streets Of London genre, but of course, tears are not what comes from listening to the hip, sly and obscure Steely Dan lyrics—that would not be cool, after all; and “cool” is a word which describes Steely Dan’s music better than any other. “Cool”, in lesser hands, could easily lead to “cold”, but it’s impossible to feel that way when listening to, say, Any Major Dude or Pretzel Logic.

And if you can’t see the comic genius and intellect of the people who wrote this letter and this article, you’re beyond redemption.

For the musicians among my Readers, I tend to prefer Skunk Baxter’s guitar work over Larry Carlton’s, not for any technical reasons—Carlton is a genius—but simply because I like Baxter’s sound for this kind of music. But that doesn’t stop me from preferring Royal Scam (a “Carlton” album) to any other of their offerings.

Did I imply from the above that I have a “favorite” Steely Dan album? Well, maybe. Royal Scam is certainly the first among equals, but then again, that’s just because I haven’t heard Countdown To Ecstasy or Pretzel Logic recently.

So I’m going to go and remedy that situation, right now. You could do worse than follow my example.

If you’ve never heard Steely Dan before (and there may be one or two sad souls who haven’t), and you like your music to have a complex, slightly jazzy feel, then here’s Amazon’s main Steely Dan page. Help yourself, to any one. You will not be disappointed, regardless of your choice; and how many bands can you say that about?

(I’d recommend the Citizen Steely Dan set for a starter choice, myself.)

And of course, not all Steely Dan’s lyrics were cynical and ironic.

On the street he spied my face I heard him hail
In our plot of frozen space he told his tale
Poor man, he showed his hand
So righteous was his need
And me so wise I bought his prize
For chicken feed

Newfound cash soon begs to smash a state of mind
Close inspection fast revealed his favorite kind
Poor kid, he overdid
Embraced the spreading haze
And while he sighed his body died
In fifteen ways

When I heard I grabbed a cab to where he lay
‘Round his arm the plastic tag read D.O.A.
Yes Jack, I gave it back
The ring I could not own
Now come my friend I’ll take your hand
And lead you home.