So one of my British Things to do today was to go to Green And Stone Stationers and Art Supplies on Kings Road in Chelsea. 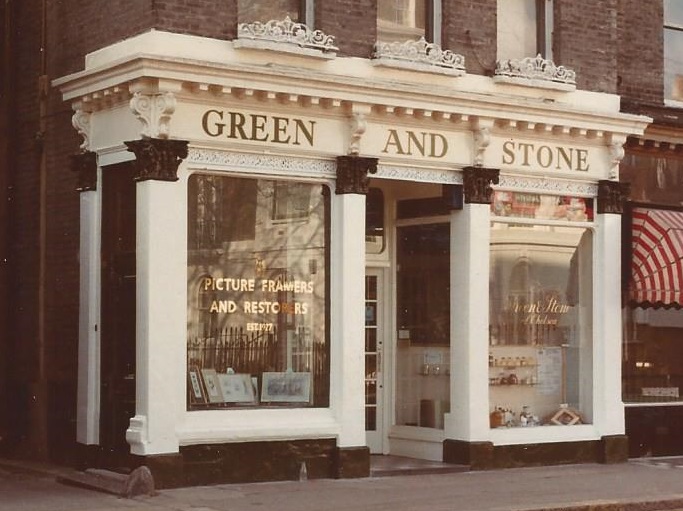 Green And Stone is a throwback to an earlier time, when people wrote on fine paper with ink pens, used blotters on letters and correspondence, and had actual writing tables. It’s also a place where, if you’re an artist (professional or hobbyist) you will find the best quality paints, inks, pens and such anywhere. (Think: bamboo calligraphy pens in nearly a dozen different nib widths, and you’ll begin to get an idea.) As someone once told me, “Seeing all this makes you want to take up that activity, just so you get to use the stuff.” And it’s true. Even if you’re not a calligrapher or artist, it’s worth a visit; I ended up buying presents for four people, all different, and only two of which were art-related — it’s that kind of a store.

I took the Tube down to Sloane Square, and walked the mile or so south to Green & Stone because I love Chelsea; the place is full of eclectic, interesting shops and many, many good places to eat that aren’t called McDonald’s and the like (although they can be found there too). Also, just off King’s Road are beautiful, classy neighborhoods (at not-so beautiful prices — whoa, it’s expensive, bubba) and also interesting establishments like The Chelsea Gardener. Best of all, because the area is upscale, the people are too: mostly classy people, well-dressed and carefully groomed. My kinda folks.

Anyway, on the way back I decided to take the No.19 bus rather than the Tube because it was a lovely day and I felt like looking at London rather than at a tunnel wall.

Part of the route was along Sloane Street into Knightsbridge, and of course it’s on this street where you find all the Usual Suspects: Dior, Ferragamo, Versace, Hermès, Pucci, Prada and all those furrin names. As a place of wealth and ostentation, it’s difficult to top Sloane Street…

…except that it’s not. I’ve seen Sloane Street many times before, only it was called “Hofbahnstrasse” in Zurich, “the Golden Mile” in Chicago, “Kollmarkt” in Vienna, “Northcross Mall” in Dallas, “Champs-Elysées” in Paris and “Park Avenue” in Manhattan. It’s all the same stores, the same overpriced merchandise and (pretty much) the same customers, only speaking with different accents and languages.

Phooey. You can keep all that crap. Give me a street with character like King’s Road or Upper Street in Islington (further along on my bus trip) any day of the week. Luxury shopping isn’t just overpriced, it’s banal — and I want no part of it.