If you’ve ever wandered through the Louvre in Paris or through any of the great houses in Britain, you’d have come across portraits of royalty and the nobility and good grief, how boring they are. Most, of course, were painted in times when there were no photography, and to preserve any memory at all of King Louis the Umpteenth or His Grace The Duke of  Marmalade-Hyphen-Dogsbottom, a portrait artist was summoned and told, “Paint me.” Needless to say, of course, the painter would take great pains to hide His Majesty’s facial pox marks or the Earl’s syphilis sores, and the result was one of uniform blandness, generations and generations upon generations thereof. If the painter was really good, and not just some fashionable hack that all the Society Knobs were using at the time (yes, that happened then just as it does today), he’d maybe capture a spark of spirit in the eyes, or a dimple in a smile, but mostly they all looked like waxwork figures, with about as much life.

Giovanni Boldini is definitely my favorite portraitist of all time, and indeed he’s in my top ten list of all artists, period. I’m not going to write a potted biography of the man (here’s a decent one on the website bearing his name); rather, I want to highlight just a few of my favorites of his works.

When heiress Consuelo Vanderbilt married the 9th Duke of Marlborough in 1895, one of the things she brought to the marriage, other than a gazillion of her father’s dollars, was a very American attitude towards one’s own children. In contrast to the other noble families of the time, who looked on their male children as “heirs and spares” and wasted no time in shipping them off to boarding school, thence to the Army/Navy or public service, Consuelo adored both her sons, and especially the younger, Ivor Spencer-Churchill.

Enter Boldini. By this time, he was one of the most sought-after portraitists in Europe — indeed, he made so much money through his portraits that in his later years he’d quit painting them and only painted what he wanted to paint (which we’ll look at down the page). Boldini spent some time with Lady Marlborough, and discovered the close relationship between her and her younger son. Then he painted this portrait of the two of them: 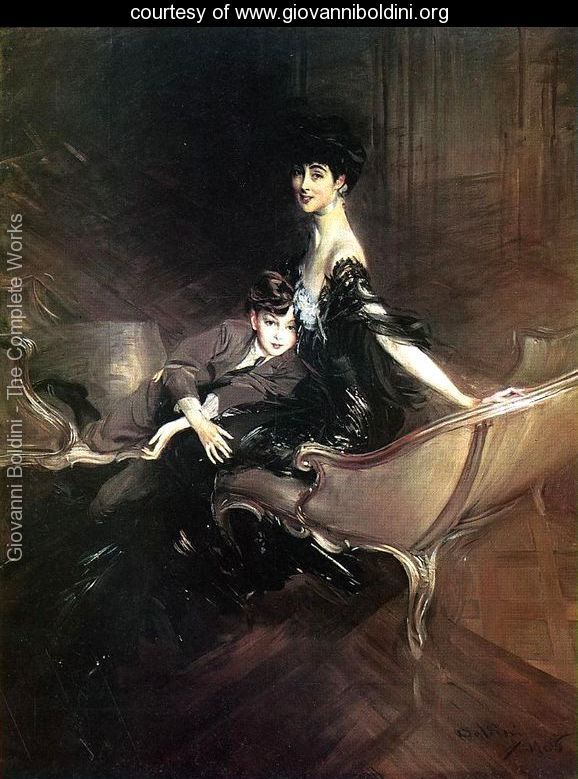 The portrait actually scandalized what was known then as “polite” society (even though it was anything but), because instead of having young Ivor standing stiffly at her side in the prevailing fashion, he had the boy lounging against his mother in a pose which, to the swells, looked more like that of a lover than a child, nestled up to her bosom and his hand possessively on her leg. Of course, Consuelo cared not a fig for the whispers — as one of the wealthiest women in the world, and married into one of the oldest and most storied noble families in Britain (or anywhere else) withal, she could tell them all to take a hike, and she did. So the portrait survives to this day at Blenheim Palace, and you can see it for yourself if you do one of the tours (unless the painting is being exhibited elsewhere). I think it’s absolutely incredible: Boldini captured the relationship between mother and son as well as Consuelo’s considerable beauty and elegance, and it remains one of the great family portraits of all time.

Even Boldini’s “ordinary” portraits are anything but. Here’s one of Lady Colin Campbell, a society beauty of the late nineteenth century: 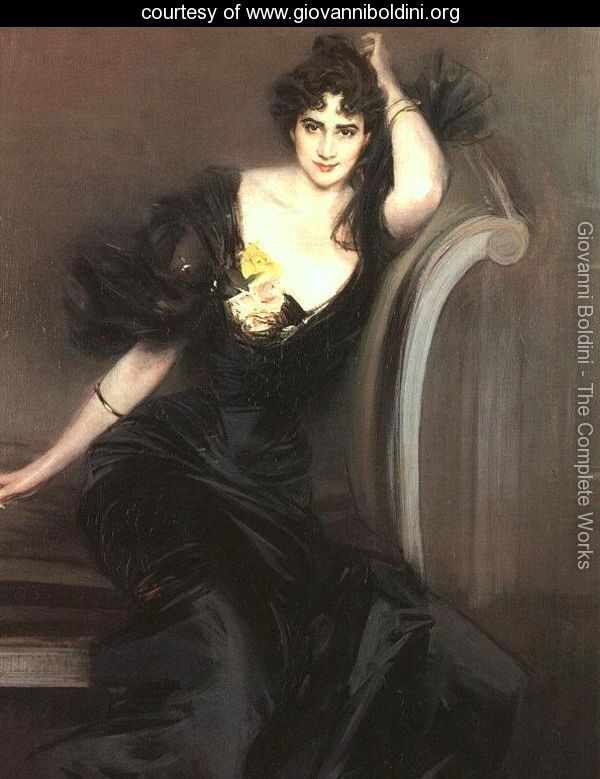 …and I don’t know if there’s a sultrier, sexier portrait of its kind anywhere.

As I said, Boldini gave up portrait painting after a while and started to do works that interested him. Mostly, as his biography notes, they were of women — but instead of the realistic style of the portraits, they began to lean towards late Impressionism. (Whether that’s because of his failing eyesight or just because he liked the style is probably a moot issue. Myself, I love almost every one of his later works.) Here’s a sample. First, the “Spanish Dancer At The Moulin Rouge”: 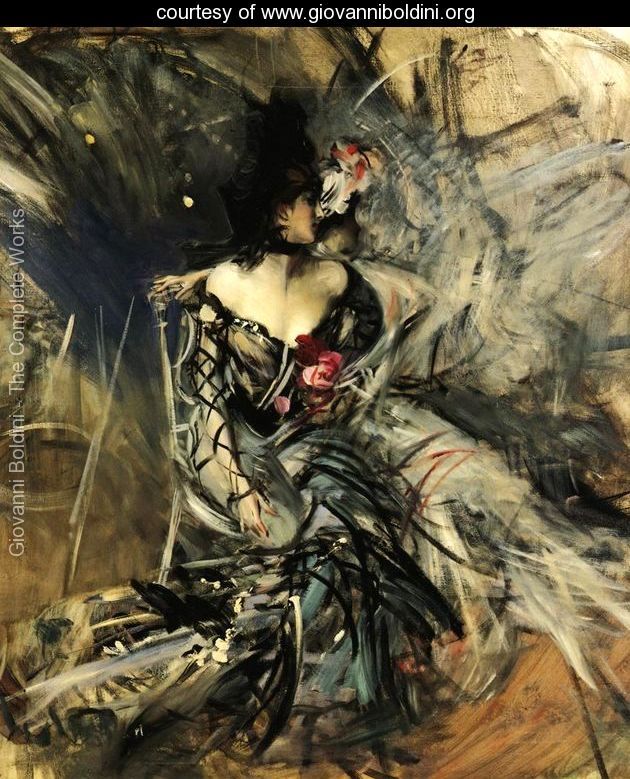 Now let’s look at something a little (okay, a lot) racier, his “Reclining Nude III”: 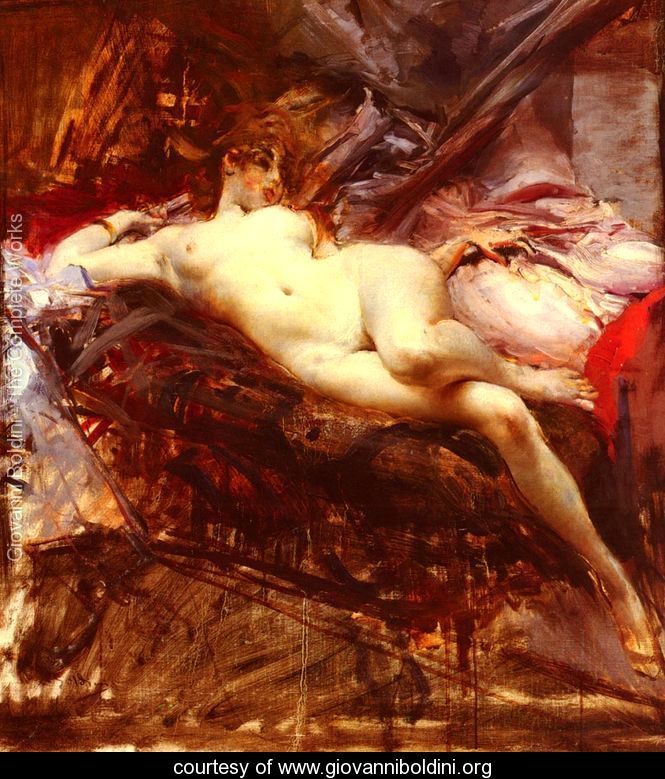 Hmmm… maybe I should have put up the usual NSFW warning, but hey, it’s Saturday and you shouldn’t be at work anyway. Finally, here’s my favorite of all Boldini’s paintings, an earlier one entitled “The Hammock”: 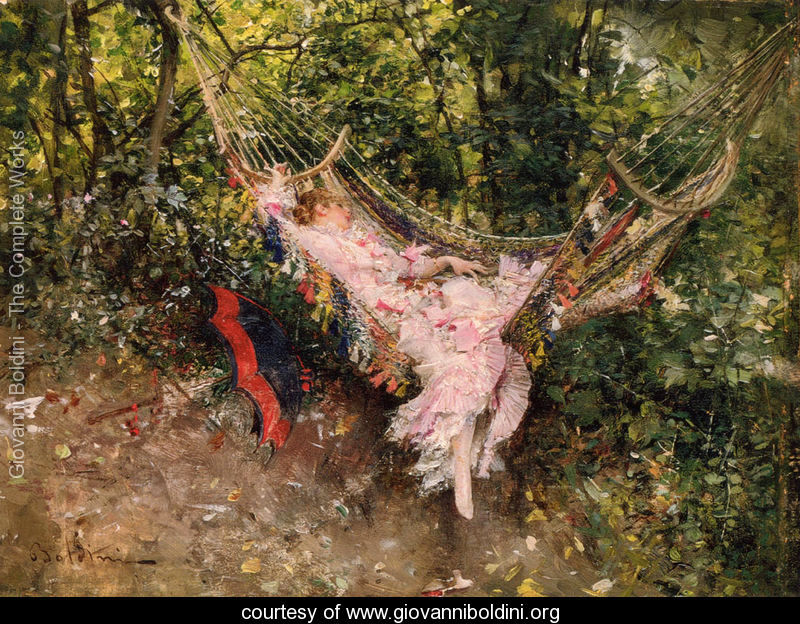 In a word, it’s exquisite: the soft springtime lighting and the dense background of bushes, trees and flowers which surround the slight form of the girl sleeping in the hammock. It’s a view which is chaste (the long soft material conceals almost everything except her face) and yet intimate (the stockinged leg falling carelessly off the hammock and out from under the dress). It’s voyeuristic, but innocently so — and I think if Boldini had only ever painted this single work, it would still be considered a masterpiece.

Now you can go and look at his other works, here. No doubt you’ll find one or two that you prefer over my choices, and you won’t hear a word of disagreement from me, ever. That’s how highly I regard this artist.

Enjoy, and if you want to buy a print of one of Boldini’s works (on canvas or paper, in varying sizes), you can do so at the Art Renewal Museum.