Longtime Readers are no doubt getting tired of me griping about the sameness of modern automobiles.  Yet the other day I found myself looking at a pic of the new Corvette C8 — which, I have to admit, I don’t hate too  much  — and asking myself:  “Where have I seen this before?”

Then it came to me:

That’s the Ferrari 458, and although the rear is different, the front isn’t, much.

I’m not into “supercars”, really, but I have to think that if someone asked me to pick one (ignoring the investment differential vis-a-vis the Ferrari), I’d probably refuse both.  Which begs the question:  “Okay, Kim… so which modern supercar of today would you pick?”

Only because I find it the least ugly of all of them, the Aston Martin DB11:

…although, as I stated earlier on these pages, I’d rather not have any  supercar, but a simple sports car, the 2015 Jaguar XK:

I saw one as it burbled past me the other day in Plano’s Legacy West area, and I was filled with an unreasonable hatred towards its owner.  And I’m not even an envious socialist.

When I saw this sentence from BritPM Boris Johnson, my heart sank:

You can’t just arrest your way out of a problem.

Then he redeemed himself:

It certainly helps, but it is only part of the answer. You need to tackle all the causes and incentives that are encouraging the criminal mentality, and that means first of all exploding any sense that the law is weak, or that criminals can get away with it. When the police catch a violent criminal, it is vital they get the sentence they deserve.
At present, there are too many serious violent or sexual offenders who are coming out of prison long before they should.
In the past five years, we have seen literally hundreds of convicted rapists who have come out of prison commit another sexual offence. There are thousands of ‘super prolifics’ – criminals with more than 50 convictions to their name – who are being spared jail altogether.
This cannot go on. I am afraid that as a society we have no choice but to insist on tougher sentencing laws for serious sexual and violent offenders, and for those who carry knives.
Our first duty is to protect the public in the most basic way – and that means taking such people off the streets.

[pause to let the applause and cheering die down]

Of course, policies like “stop and search” are going to cause palpitations amongst the liberals and criminal-symps [lots of overlap], but the plain fact is that when the police can do their job — i.e. try to prevent crime before it happens — and the justice system is allowed to work — i.e. impose jail sentences that keep criminals off the streets — society as a whole improves.

Just ask the denizens of NYFC when Mayor Giuliani and Police Chief Bratton did just that, back in the late 1990s and early 2000s.  And if it worked there, it can work anywhere.

And to let the BritPM have the last word:

Yes, in the short term it will mean more pressure on our jails, and that is why today I am also announcing that we are creating another 10,000 spaces in our prisons. The Chancellor, Sajid Javid, has agreed to invest up to £2.5 billion to deliver this commitment.

In last Sunday’s post about places I’ve seen, there was one pic which, for various reasons, didn’t make the cut:

As a long-ago Reader once commented:  “The best view of Manhattan is through a bomb-sight.”

Like so many cities, the place is best viewed from a distance because a) it smells and b) Noo Yawkers.  And of course there’s the political thing.

Despite all that, however, I like NYFC even though (to quote another Reader) it’s “mostly hype and hicks”.  And I’m not talking about the members of the International Hayseed Set who can be found gawping at Times Square and forming long lines at the Statue;  having lived there for three years, I’ve found most New Yorkers to be unbelievably parochial and yes, hicks.  What else can explain a city which serves the most over-priced-yet-average food in North America, and thinks that if it doesn’t happen in NYC, it doesn’t matter?

New Wife has never been to NYFC, so at some point I may have to grit my teeth and take her there.  Or not.  The price (to me) may just be too high. 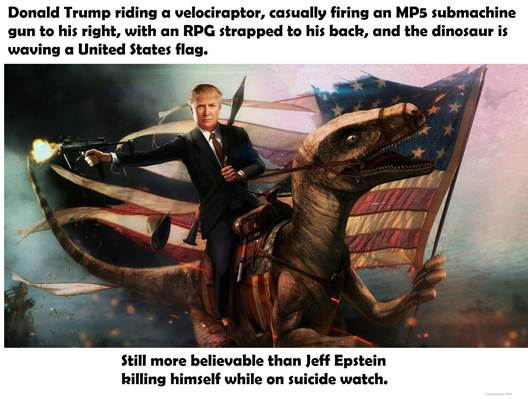 I see that the failure of the suicide watch is being blamed on (duh) a staff shortage in the federal prison system, and we’re supposed to believe that a guy with a 6″-thick black book containing several tons of dirt on famous people (like the Clintons) simply offed himself?

I think someone should point out to POTUS Trump that if so-called red flag laws become entrenched in the nation’s legal code, then after he leaves office and becomes a private citizen once more, he will never, ever be able to buy a gun through regular channels — because of the many, many  times he’s been labeled as a danger to society by Lefty psychologists and the like.

Not just that, but any guns he currently owns would in all likelihood be confiscated by the NY state police sturmtruppen, especially if that little fascist turd Andrew Cuomo is still governor.

Yet another horror story from Britishland’s NHS:

The absurdity is part of the recent NHS drive to limit the number of pricey, unnecessary operations.
GPs must apply to a body of health chiefs – called the Procedures of Limited Clinical Effectiveness panel, or PoLCE – before they can refer patients for certain procedures.
But what began as a sensible process to stop people getting breast enhancements and eyelifts on the NHS has snowballed into a deliberate ploy to deny genuine patients essential treatment.
It seems a the NHS is doing everything it can to stop doctors giving treatment that we know works.

Why are these opaque and unelected assholes doing this?  Here’s all you need to know:

Another local authority approved just 46 of the 1,162 hernia operations requested last year, according to NHS figures.

You don’t have to be a cost accountant to see the savings involved in denying over eleven hundred surgeries per annum — and that’s just for hernias.  Apply this ratio to all the other types of medical procedures, and the “savings” would add up to billions.

And screw the pain-wracked patients.  They’re just an annoyance to government employees, and their problems are just a line in the budget.

Remember:  whenever you’re faced with some tool who advocates “single-payer” medical care, kick them in the ass.  Hard.  Wear boots.