Some of you may have read the above article and gone “Huh?” at my choice of chambering (9.3x62mm) for the Mauser.  A brief explanation follows.

As I’ve grown older, the thought of owning a whole bunch of different rifles (modern, not oldies) has palled somewhat, to the extent where I think I would prefer one astoundingly-good rifle in a do-it-all chambering.  So why choose the 9.3mm Mauser?

It’s more powerful than the .30-06 Springfield and has less recoil than the .375H&H Magnum.  Also, it’s old, having been developed back in 1905.  So it could take pretty much anything I’d need to kill, certainly in the U.S., and just about anything I cared to shoot in Africa, were I ever to find myself back there.  The premium hunting ammo (Federal Woodleigh 286gr) is horrendously expensive (over $4 per pull);  but of course Prvi Partizan, bless their little Balkan socks, make it for about $1.25 each so practice is not as expensive as one might think. 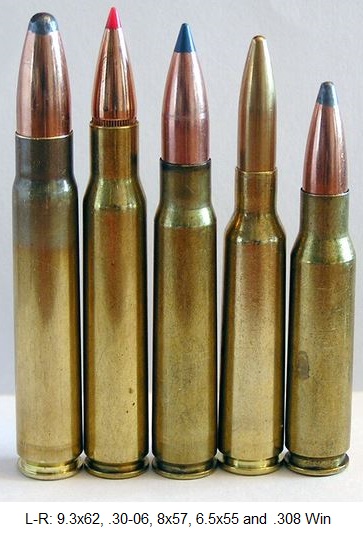 Here’s the thing:  the 9.3mm Mauser isn’t as powerful as the H&H.  But that reduction in power comes with about 25% less owie to the shoulder — and lest we forget, the 9.3 was used to hunt all sorts of African game (including elephant) in the decade or so before the H&H came to the party.