In a recent survey, Britishlanders were asked to state their favorite sandwiches, and the results were as follows: 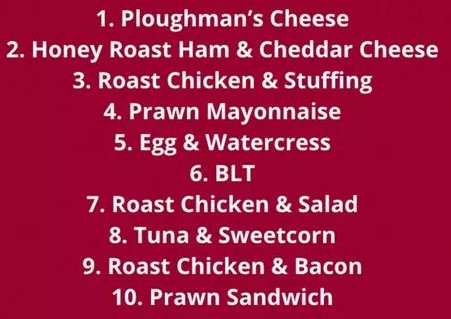 For those Murkins unfamiliar with the term, a “ploughman’s” sandwich (cheese, ham, pickled onions or pickles, chutney, and sourdough bread) has nothing to do with ploughmen nor even farming — it was a marketing term developed in the late 1950s, and the promotion of the Ploughman’s lunch was part of a campaign to promote the sale of cheese in pubs.

As for the other choices:  Murkins will also be surprised by prawn sandwiches, but the Brits use the tiny “cocktail” or “baby” prawns, not the normal large things we eat with hot sauce Over Here.

And there has to be a special place in hell for whoever came up with putting tuna and sweetcorn on a sandwich.