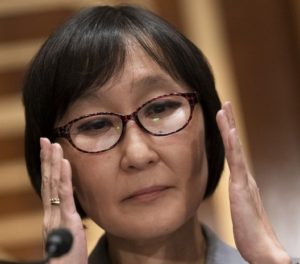 I wonder what made people hate the idea of this cow being the Comptroller of the Currency so much?  Oh yeah:

Saule Omarova’s stated supported proposals would cause banks to cease being depository institutions for individual accounts, reassigning these checking and savings “demand deposit accounts” directly to the Federal Reserve. That proved too radical an agenda for Democrat and Republican senators to take a risk on  [I should fucking well hope so — K]; particularly given that the head of the OCC does, indeed, have the power to facilitate such changes as part of their tenure.
Omarova also raised eyebrows with her support for the concept of a National Investment Authority (NIA) that would have the power to direct private capital investment in the US from a central planning entity.

This steely-eyed Stalinist bitch (a graduate of Moscow State University — yes!) would have, at a stroke, completely demolished the entire concept of private property — yes, money earned is actually property, just not as far as Communists are concerned — and made the almighty Federal Government the controller of our personal finances.  And ditto for private investment — centrally controlled by government and not by companies, shareholders and individuals.

Of course, “President” Braindead called this opposition a “personal attack”, when in fact it was simply sharp opposition to her little plan to destroy the economy of the United States.

I need to stop now before I say something terrible.