Everyone should now be aware that this year’s Boomershoot rifle was obtained, I decided on the Savage Apex Predator in .308 Win:

So it arrived, and I collected it from my local Merchant Of Death.  Which is where things started to go sideways.

Guys, look:  if you’ve handled and fired enough rifles — in the many hundreds — you get to where you can get a “feel” for a rifle as you take it out of the box.  And when I took this Savage out of the box, it didn’t feel right.  I know that my preference for wooden stocks is well known, but then again I’ve handled (and owned) scores of plastic-stocked rifles as well;  and this one felt flimsy.  It felt more flimsy than my Marlin SSQ .22 rifle, to be frank.  The barrel also looked a little on the thin side — 20″ is marginal in term of length, and it was fluted.  Had the rifle been chambered in .223 Rem or even .243 Win, I’d probably not have worried too much;  but in .308 Win?  I had a bad feeling about it.

Anyway, I took it to the range, and after giving it a light oiling, I set to ranging it in.

And met with utter failure.  Let’s start with the easy stuff, first.

The rifle would not shoot consistently.  I would get two rounds into a single hole or a keyhole-touching “Mastercard” hole, and then the third would go off into the wild blue yonder, 2″ or even 4″ away.  This pattern repeated itself over the next twenty or so rounds, whereupon I quit because the barrel was super-hot (and I was not shooting quickly);  but worse, I quit because my right hand was getting a fat bruise from working the bolt handle.

The fired cartridges were binding in the chamber.  I mean, really binding.  People joke about needing a mallet to pull a Mosin-Nagant’s bolt back, right?  I would have killed for a mallet.  In fact, at about round #25 I gave up.  The only reason I persisted as long as I did was because I originally thought it was just “new rifle” syndrome or something, but it actually got worse as I went along.

Broken.  So I took it back to the gun store, and asked what to do next:  would they send it back to Bud’s Gun Shop?  No.  I would have to do this all by myself.  (Had I bought the gun at the Merchant Of Death, it would have been different;  but as they were just the conduit, so to speak, they weren’t interested, and probably justifiably so.)

So I contacted Bud’s Gun Shop to see how I could get it back to them, and get a refund — I wasn’t interested in getting a replacement — only to hear from Bud’s that because the rifle is still under manufacturer’s warranty, I’d have to send it back to Savage.  (I won’t go any further into detail about this, as it’s ongoing.  My problem is that I didn’t pay Savage for the gun;  I paid Bud’s, and this may get nasty.)

Anyway, there I was, stuck with a non-working gun, and moreover, a gun that I wasn’t comfortable with in the first place.  And, of course, time is ticking away because I have to leave for Boomershoot on April 27th — three weeks’ time.

Clearly, this called for a change of plan, so here it is:

It’s the CZ 557 Varmint, with a 26″ heavy barrel and a proper bench-type stock.  When I was complaining to the guys at the MoD, I happened to see this on the rack — not too difficult, they only had a few rifles on the rack anyway — and I was expecting to find it in some other caliber;  but no, there it was in .308 Win.  So into the car it went.

It came without a scope, but I’d already got a Vortex 6-24x50mm (to replace the inadequate “package” 4-12x44mm scope which came with the Savage), so I popped that on the CZ.   Except, of course, all my boresighting gear is buried somewhere under the our furniture stacked in my garage, waiting for the flooded apartment’s rehab to be finished.

But what the hell:  I sorta-lined the thing up with the barrel (Warne CZ High rings), and took it to the range yesterday morning.  I put up a large blank paper target with a 1″ orange target dot in the middle, sent it out to 50 yards, and touched off three rounds: 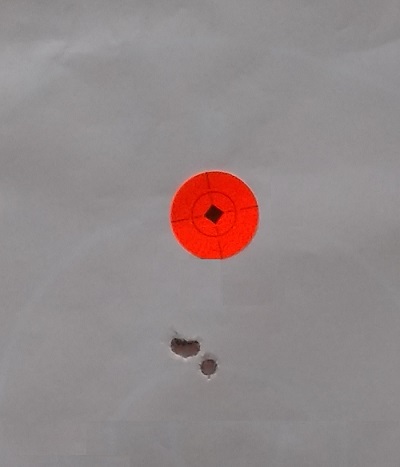 To say I felt relieved would be a huge understatement.  Also, the CZ’s trigger is not a “set” trigger like I’m used to with the brand, but a single-stage number which got smoother and smoother the more I fired it.  Here’s the final target, consisting of three 3-round strings, with scope adjustments between each.  (The overshooting between the point of aim — the orange dot below the diamond — and the point of strike is because I’ll be shooting 8″ boomers at 500-600 yards distance.) 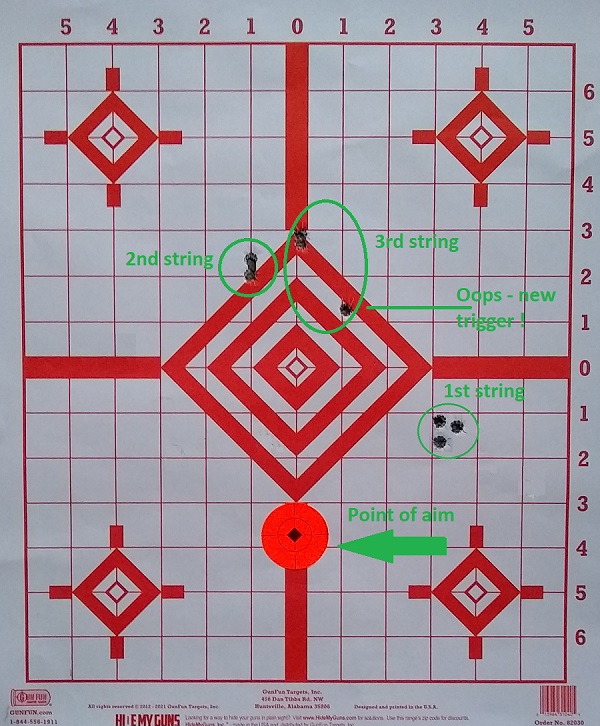 As for the third string:  the flyer was the second shot, and it was operator error, because I paused to take a breath or two after the first shot, and when I exhaled and got into position, Stupid Kim’s finger was on the trigger while I was moving the rifle into position.  So:  unintended discharge (I know, I know) — but the third shot was right back to where it should be.

It’s an absolute beauty, and therein lies our problem.

While the Savage was a budget rifle (around $700 landed at the MoD), the CZ ended up costing just over $950;  and I used the Boomershoot travel fund to pay for it.  In other words, I need y’all to buy a dozen or more tickets to cover the difference.  (Only the difference:  I’ll get the money back for the Savage, never fear — it might just take a while, and the time is ticking away.)

Just so we’re all clear on the topic, though:  this CZ 557 is an excellent rifle, and in the hands of a better shooter will be capable of doing one-hole groups all day.  This is not a budget rifle, as I’d originally planned:  it can hold its own against rifles that cost twice as much, and nobody will ever sneer when you take it out of its case.  So for those of you who held back on getting a ticket because of the “budget” rifle thing:  this is a whole ‘nother ball game, and if ever there was a rig which calls out “serious shooter”, this is it.

Please help me out.

Lessons learned:  if I do this again for next year’s Boomershoot, I’m going to buy the rifle in January, and most probably in 6.5mm Creed, which will give me a chance to get the whole rig settled in properly.

My only regret, now, is that I didn’t get the Zeiss / Meopta / Minox glass as I did last year — but the Vortex seems to be doing just fine.