The Seditionists Need A Path Back Into Society

…and it’s all about how the Left can make accommodations to learn to live with us, the poor misguided 75 million people who actually voted for Trump in 2020.

Whom she charmingly calls, “Seditionists.”

Now I’m not going to fisk the whole article because I’m trying to keep my breakfast pint of gin to only one per day, but let me just make one observation.  Here’s an example of Applebaum’s towering condescension:

Here’s a tip for The Atlantic  and its writers:

We’re not rejecting our country’s political system.  We’re protesting the fact that our votes were nullified by massive injections of fraudulent ballots in states which would otherwise have gone overwhelmingly for Donald Trump.

Or, put another way:  if our political system — the one that the Left seems to have installed — is now going to systematically allow wholesale criminal alterations of voting preferences by the addition of fraudulent ballots:  then fuck yes, we’re going to reject it.

Until such time as you understand this, there will never — never — be any kind of accommodation towards the Left by us conservatives.

What happened at the Capitol wasn’t an “insurrection”, it was a protest.  If you want to see an insurrection — and I promise you, you don’t — just keep squeezing us:  keep calling us names such as “seditionists”, keep preventing us from getting jobs because of our political philosophy, keep talking about “re-educating” or “reprogramming” us and our children into obedience to your foul Marxist doctrine, keep shutting us out of social media, keep muzzling conservative voices, keep trampling all over our First Amendment rights in general, keep trying to infringe our Second Amendment rights, and in short, keep trying to push us out of the American society and polity.

You Marxists think that the protest at the Capitol was the bite of a savage dog (you know, the one that keeps getting teased until it snaps).  It wasn’t a bite — it wasn’t even a nip. 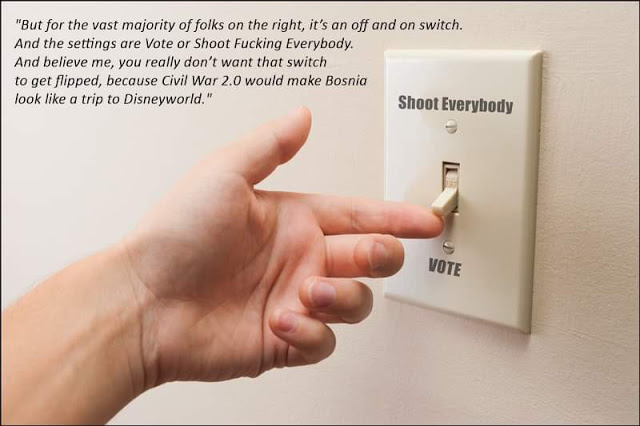 So keep trying to take away conservatives’ votes (like with the horrible “For the People Act of 2021”, which entrenches the wrongdoing of 2020).  Just remember the switch in the above picture.

As your own Glenn Greenwald has written:

The New Domestic War on Terror is Coming
No speculation is needed. Those who wield power are demanding it. The only question is how much opposition they will encounter.

If, that is, you’re going to categorize all 75 million of us as “terrorists”.  That should be interesting.