Seems like I may have been a little too dismissive of smaller calibers when it comes to stopping bears.  Here’s one story:

The startled cubs bawled out for their mother, which came running around the corner. The woman fled into her house, but her dogs slipped out the open door. A fight ensued between the adult bear and the dogs, during which the woman attempted to scare the bear away. The woman’s husband arrived armed with a .22-caliber pistol and fired a single shot in the bear’s direction, Peralta said.
The bear ran off and collapsed about 40 yards away, dead from the gunshot wound, Peralta said. One of the cubs was found near the house and the other was found in a tree.

Frankly, this is what I call a “David & Goliath” story:  David may have killed Goliath with a single stone, but that ain’t the way to bet.  A more likely outcome is this one:

On 1 September, 1995, two male tourists were attacked by an adult male bear on a remote island in eastern Svalbard. The two tourists defended themselves with a .22 calibre pistol which proved ineffective. One man was killed, the other injured.

These, and a whole lot more actual reports of people stopping bears with handguns of all calibers can be found here.

Basically, all this stemmed from a letter from Loyal Reader Steve N, who asked the following:

I’ve never hunted anything more dangerous than ruffed grouse, but I love guns vs. bear talk.  I inherited a Marlin .444 when my dad passed away a few years back.  I shot it a bit and always thought it would be my go-to if any of these NH black bears up here needed tuning up.  Any love for the .444?

Frankly, I’ve never been a great fan of the .444 Marlin cartridge.  Compared to a .44 Rem Mag, you get a whole lot more performance (for a lot more money — .444 typically costs almost twice as much as .44 Mag — I don’t know what the current situation is, in these ammo-free times), but I’ve yet to shoot more than three rounds of .444 Marlin before my shoulder really started to hurt — I mean, worse than after firing three rounds of 7.62x54R with a Mosin M44 carbine.  That may be because of the rifle type, though:  WinMar lever guns don’t give a lot of recoil protection.

All that said, Steve, the .444 Marlin should work just fine against the smaller black bears — and as it’s an heirloom rifle, the cost of the ammo should not be an issue.  Carry it in good health.  (Just remember that the .444 is a stand-alone cartridge:  you can’t shoot a .44 Magnum in your rifle — even though they’re shooting the same bullet — as the .444’s case tapers from a wider base, compared to a .44 Mag’s straight case.)

And because this discussion is useless without a picture: 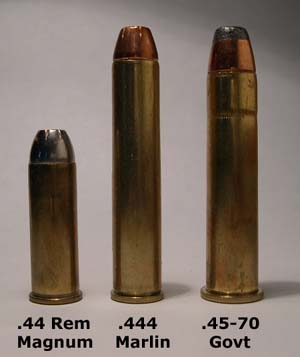 For everyone else’s benefit:  if I were starting from scratch with a lever rifle, so to speak, I’d prefer to carry a rifle chambered in .45-70 Govt around in a New England forest (or pretty much any forest, come to think of it) rather than a .444 lever gun.  But that’s just a preference on my part;  your opinion may vary, and that’s not a problem.