This just goes to show how ignorant some people are: 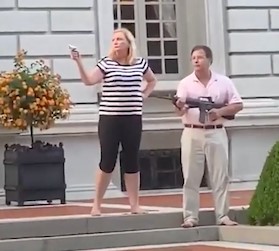 It seems that residents wanting to defend their homes from a mob are no longer allowed to exercise their Second Amendment rights in the city of St. Louis. On Friday, KSDK reported that local prosecutor Kim Gardner got a search warrant for the McCloskey home. And based on the court order, police seized the rifle used by Mark McCloskey, the St. Louis resident who used the weapon to defend his home from a group of protesters who threatened to kill him and his wife. They also seized the handgun Patricia McCloskey used, which was being held by their former attorney.

The ignorant people, in this case, would be this loathsome prosecutor Gardner and the people who “advise” her.

If I’d been in this situation (assuming I only had one gun, which I do, following that terrible canoeing accident on the Brazos or maybe Colorado rivers), I would have replacement guns in the house about, oh, half an hour after the cops left.  Only this time, I’d hide the some of spares where the cops would need a pneumatic drill to get access to them.  Or not.

So from this unhappy situation we should deduce the following:

If you haven’t made such arrangements already, do it now.