Democrat presidential hopeful Elizabeth Warren wants to use federal excise taxes to reduce gun and ammunition sales.
Her gun control, made public in August on Medium, shows Warren believes the current ten percent excise tax on firearms is too low. She wants to raise that tax to 30 percent while increasing the tax on ammunition to 50 percent.
Because excise taxes are paid directly by the consumer–the taxes are added to the price of the goods–this means a $500 gun would immediately cost $515 and the price for a $20 box of ammo would immediately rise to $30.
Warren claims this taxation policy would “bring in new federal revenue” that can used for “gun violence prevention.” And she simultaneously suggests the tax would raise the price on guns and ammo to a level sufficient to stifle sales.

So using her “economics”  it would go something like this:

So therefore Madame Marxist suggests that with her plan:

Except of course that in the real world, AK ammo sales would fall to 100 rounds and yield only $15 in excise taxes (a 50% loss in revenue).  “Yay yay yay, but ammo sales have fallen!” she would pronounce.  But why  would sales fall so precipitously, she asks?  Because of the higher tax?

Because, you Commie coksucquer, during the months before you could enact this poxy tax increase, we AK owners would buy countless millions  of rounds of ammo, so that we’d have enough stored for the lean years — just like we did before the term of that other socialist asshole Barack Obama — and resume buying once an actual American became president again.

Ditto all those eeevil AR-15s and AK-47s you hate so much:  we’d buy so many before you could touch them, the gun factories would have to institute 365-day / 24-hour shifts just to cope with the demand.

I swear, I’m a huge fan of the First Amendment and I like to hear politicians spell out their proposed policies;  but I would also propose that anyone using idiotic economics theory (like the above) to create policy should be forced to wear a dunce cap and be beaten with wet spaghetti — just because of their naked stupidity.

And this phony bitch wants to run things? 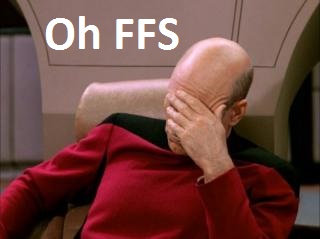