Comment from Reader Frognot about my dismissive post on the end of the awful Game of Thrones TV movie:

Given your historical distaste for any kind of fantasy, Kim, I’m not sure why anyone would give much credence to your opinion of a fantasy TV series. That’d be like getting a folk-rock fan’s opinion of, well, non-folk rock. Which I’d perfectly valid for folk-rock fans and of little use for anyone else. I know you’re only presenting your own opinion, but by this standard, wouldn’t practically any movie that ended with the hero’s death be a bad movie if the bad guys survived? Braveheart had any number of flaws, but since it ended the same as the 1st of 8 seasons of GoT did, did that make it awful on that basis alone? It seems to me that whether or not your favorite character survives the first ~10 hours of GoT (7 more seasons adding up to a whole lot more time)? Hint: the worst of the bad guys got deaded, some of the better ones survived. If that’s different from realistic storytelling, I’m curious as to how?

And if you’re opposed to realistic storytelling (within the limitations of human experience plus the milieu the story is set in), then I truly don’t understand your visceral dislike for fantasy (and possibly SF, but those posts were long ago, well before you went dark due to Connie’s illness).

I understand people who dislike swords and sorcery (as you once did, IIRC) and prefer past-to-current murder mystery (as my wife does), SF (as a friend does), or historical fiction as others do (but that’s an oxymoron if there ever was one), but I have trouble imaging why you’d have ever watched any of GoT, and why you’d think your hero would survive the first 1/8?

Take a look at the War of the Roses, or the reign and aftermath of Henry VIII, or most any contentious period of human history. Just because it offends your sense of stories doesn’t mean it’s not a good story. The Peloponnesian War had the best of both sides die before it was over, often pointlessly. Even if modern audiences weren’t historically illiterate, that hardly means a long multi-season series covering it would be automatically bad. That’s just a romantic idea of how stories should go, which in many cases, is just a lie in a better costume.

I’m disappointed, all in all. At least disclose your dislike of (much) fantasy right off the bat, while disclosing your preference for a different kind of fantasy (Hays Code good always wins, evil never prospers). Though evil didn’t prosper by the end of GoT, and some who turned to evil redeemed themselves before the end. Oh well. Didn’t happen by the first 1/8 of the tale, therefore … awful. I’ll be the first to admit the writing slipped badly in seasons 7 & 8. It was hasty, cut short, and not well laid out. It was explicable with much discussion with the wife, but when 3 and then 4 episodes are slashed from the last 2 seasons (almost 1/3), it’s damned hard to tie all the loose ends up, let alone adequately explain some actions of characters. Whatever.

As heartfelt a comment deserves an answer all to itself.

I remember once being dragged to a Ronnie Millsap concert — dragged  because I’ve never really been a big country music fan — but despite my dislike of the music, I came away in total awe of Millsap as a pianist:  he was one of the greatest percussive pianists I’ve ever heard, and I’m not sure that I’ve heard his equal since.  My “ignorance” of the music couldn’t stop me appreciating the musician’s virtuosity — just as my dislike of the fantasy genre can’t stop me from calling out terrible writing when I see it.

My dislike for GoT had therefore little to do with the genre, and a lot to to with the storytelling itself.  (Contrast my distaste for GoT with my outright admiration of the Harry Potter fantasy movies, and you’ll see where I’m going with this.)

Comparing fiction with history is dangerous, because history is written in stone — King X died in the opening campaign, what he might  have achieved belongs to speculation, and that’s the end of it.  Braveheart  was a crap movie not because of its ending but because its ending was the only actual historical event in the movie which actually happened:  prima nocte  was never enforced by Edward I, William Wallace’s wife wasn’t murdered by the English, the battle of Stirling Bridge wasn’t fought on an open field but on, as the name suggests, around a bridge, Wallace never bonked the future Edward II’s wife… and I can list about half a dozen more examples of the movie’s ahistoricity.  Braveheart  wasn’t historical:  it just acted as though it was.  (Frankly, if Mel Gibson had ended up fighting a duel with Edward I and his wussy heir, killed them both and married Longshanks’s daughter-in-law, that would have been more like a decent action movie with a Hollywood ending.  I bet the studio brass would have signed off on it, too.)

Fiction, however, is a different thing altogether, not just for the author, but for the relationship with his audience.  And like it or not, fiction readers are looking for an acceptable outcome — much as the author may wish it otherwise.  (My own first novel, Vienna Days, was rejected by a host of publishers because it ends with the suicide of the principal character — despite my telegraphing of the likely outcome in the very first sentence  of the book.)

Readers want to form a relationship with a fictional work’s characters — like it or not — and when there is no reason to do so, they switch off.  Unsympathetic characters are the death of any fictional work;  dead ones equally so.

Which is what happened to me with GoT.  Without any bond with the characters (because they were all being killed off), I was left with only the fantasy aspect of the story;  and as you correctly pointed out, that isn’t my favorite genre (to put it mildly —   dragons and such are not my preferred plot device).  And my distaste for Martin’s writing was reinforced after the Red Wedding  episode, where the only remaining identifiable principal characters were slaughtered.  The shocked response of GoT  fans to Red Wedding  was well documented:  I was just amused, because what that meant was that the writers were going to have to start at Square One to rebuild the audience’s bond — only this time, there would be a well-founded skepticism because… well, why form a bond with a character when Martin’s going to kill him or her off at any time?  (As he did, time and time again — and I howled with laughter when I heard that the Jon Snow character had been resurrected after a brutal death — that was A Death Too Far for the audience, and the writers’ scramble to bring him back to life was risible.  (It ranked right up there with the equally-silly resurrection of Patrick Duffy’s dead character in Dallas.)

The audience’s bond with a character is critical, in fiction.  From a writing perspective, there is a reason why Star Trek  remained as popular as it was:  Spock wasn’t killed off in episode 24, and Kirk didn’t die halfway through the series either.  Nobody cared about the appalling death rate of the red-shirted crew members — somebody  had to die or else the stories would have contained no drama — but sacrificing nonentities runs no risk of alienating the audience.  Imagine what would have happened to Firefly‘s audience if Nathan Fillion had been snuffed out after the first season.  There would have been  no second season.  It’s also a good thing that J.K. Rowling wrote the Harry Potter books, or else Hermione and Ron Weasley would never have made it past The Half-Blood Prince.

Had Martin stuck to killing off Third Knight From The Left, Lord Nobody or Whore With The Big Tits (the GoT  red-shirt equivalent), the whole series would have been an epic, rather than a series of “start-again” plot arcs.

When an author doesn’t care about his audience, I think it’s a major fault.  (Annie Proulx, by the way, stands similarly condemned, as do a number of other modern writers.)  That contempt is very much a post-modern construct in literature, when the writers, bereft of plot, use the rejection of accepted form to make their writing different, in the name of “realistic” writing.  There’s nothing realistic about fiction, by definition.  But the forms and structures  of fiction are important — in fact, they’re essential.  Ignoring them is a sign of immaturity, and willful disregard is contemptuous and arrogant.  You have to be an extraordinary writer to pull it off — ever wonder why Finnegan’s Wake  has never been repeated? — and Martin isn’t an extraordinary writer, despite his volume of work.

And that, as I said, is my major beef with George R.R. Martin:  he’s contemptuous of his main characters and therefore of his audience.  That’s fine, it’s his work after all.  I just don’t have to put up with his shit storytelling.  And the genre has nothing to do with it, either.

I’m sorry you were disappointed.  But I write them as I see them. 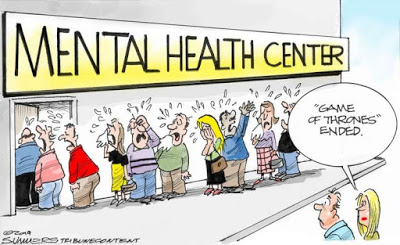