My RFI is for someone in the north Texas / southern Oklahoma area who can weld heavy steel.  Anyone out there interested in doing a long-term project with me?

Here’s my line of thinking.  When a bullet strikes a soft target, you’ll get penetration to varying degrees (as we’ve been seeing here, for example).  That kind of measurement and analysis is made  possible with the use of ballistic gel.

I want to measure something a little different:  kinetic energy.  I know that ammo manufacturers usually supply this information in ft/lbs for their products (at least, most of the centerfire rifle stuff does);  but I want to try it for myself.

Here’s what I want to do.  We’re all familiar with the tractor-pull thing, where trucks compete to see who can shift a specific weight the furthest (with a shifting weight which increases drag over distance).  I want to apply that same principle, only using a weighted sled running on rails.

The methodology would be to have a stout piece of steel, e.g. a 1-ft x 1-ft x 2″ thick steel square — the target (solid, to avoid any thought of penetration) — welded to a  weight with four wheels (like below) attached. 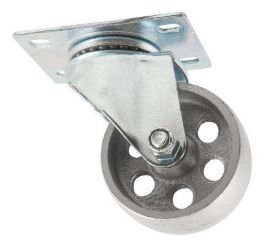 Ideally, the whole weighted/wheeled target would weigh about 100lbs.

Then I’d want to get two lengths of steel I-beam laid on their side, upon which the wheels would run, set on level ground.  (I don’t know how long the beams would have to be;  10′? 15′?  We’d have to see.  Or if we needed shorter channels for ease of use, remove the wheels and replace with skids instead.)

The we could shoot the 1′-square steel target, and see how far the bullet(s) pushed the sled along the rails.

This all came about when I was talking to someone about the wisdom / folly of hunting a Cape buffalo with a .45-70 Govt vs. the Usual Suspects (.375 H&H, .458 Win Mag etc), and the guy (a seasoned hunter) said that it was all very well to use a round which penetrates a buffalo, but if it went all the way through, it was wasted energy;  he’d prefer to dump all the energy into the animal, to “knock it on its ass”, as it were.  A buffalo’s hide / body is tough, all right:  but the old “needle vs. bowling ball” argument always rears its head.

My goal in this is not to test rifle ammo, but to test self-defense pistol  cartridges.  I believe that if you were to combine ballistic gel-penetration numbers with the sled’s momentum / ft.lbs data, you’d be able to add yet another dimension, and judge a cartridge better than simply relying on the Lucky Gunner formula of muzzle velocity / bullet expansion / gel penetration.

If someone (e.g an engineer) has experience doing this kind of thing and wants to scope / design the project, please let me know.  Right now, I’m just blue-skying the thing out of ignorance.

Or has this, or something similar, been done elsewhere and I just missed the party?