The Washington Times recently published a list of the top dozen “Most Iconic Handguns”, and unusually for topics of this nature, I couldn’t find much fault with their choices.  To save you having to page through their stupid slideshow, the guns are:

Like I said, I can’t find much to argue with, if you define “iconic” as “guns that are instantly recognizable to most people” either by their shape, their popularity or their place in legend / the movies.  Among gunnies, the list might look quite different.

But even then… one could argue that the two S&W revolvers are almost identical outside the caliber and frame design (to handle the extra recoil of the .44 Mag), and purely by the above definition, the Mod 29 (Dirty Harry’s gun) deserves its place, the Mod 27 less so.  Ditto the Luger and the P38:  the older P08 is instantly recognizable as much for its shape as for the name, but its replacement, the P38?  Not so much, even though the P38 is the better pistol of the two.  And as much as I hate to say this, the same is true of the 1911 and the High Power.  To us gunnies, the two are instantly distinguishable;  but to the general public?  Probably not.

Frankly, any such list which ignores the Colt Python (.357 Mag) must surely be suspect.

And finally, for the history buffs (and there may be one or two among us), there’s the British Webley Mk VI (.455 Webley or .38/200), which must surely rate as iconic, by any standard: 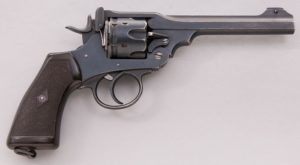 …and of course, there’s the the Smith & Wesson Model 10 (a.k.a. the Military & Police and/or Victory model in .38 Special), which some might justifiably consider the iconic revolver — certainly, with over six million manufactured, it was the most-produced handgun of the 20th century. 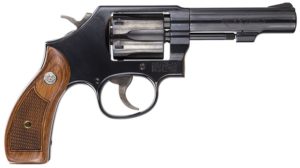 If I were doing the list, I might omit the Walther P38 and S&W Mod 27, and substitute two of the three beauties above (which two? aaargh).  How about a top 15?

Your observations in Comments.