As usual, His Excellency John Bolton has the right stuff, this time about the horrible International Criminal Court (ICC) in The Hague:

“If the court comes after us, Israel or other U.S. allies, we will not sit quietly.  We will negotiate even more binding, bilateral agreements to prohibit nations from surrendering U.S. persons to the ICC.  And we will ensure that those we have already entered are honored by our counterpart governments.  We will respond against the ICC and its personnel to the extent permitted by U.S. law.  We will ban its judges and prosecutors from entering the United States.  We will sanction their funds in the U.S. financial system, and, we will prosecute them in the U.S. criminal system.  We will do the same for any company or state that assists an ICC investigation of Americans.  We will take note if any countries cooperate with ICC investigations of the United States and its allies, and we will remember that cooperation when setting U.S. foreign assistance, military assistance, and intelligence sharing levels.  We will consider taking steps in the UN Security Council to constrain the Court’s sweeping powers, including ensuring that the ICC does not exercise jurisdiction over Americans and the nationals of our allies that have not ratified the Rome Statute.”

Some liberal asswipes created this pic to whine about God-Emperor Trump’s appointment of The Mustache (“The Warmonger”) as his National Security Advisor: 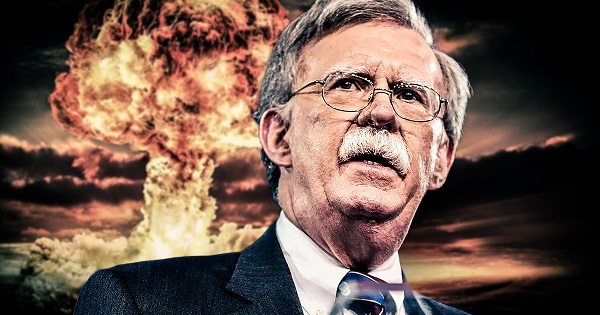 Me, I wanna make a fucking tee-shirt of it.