I have the world’s greatest sweet tooth.

If there’s no candy in the house, I’ll suck on brown sugar cubes.  I mix peanut butter with golden syrup, I will add sugar to Frosted Flakes (!!!);  and speaking of cereal, the last time I had Honey Smacks in a bowl with milk was during Richard Nixon’s first term, because  I normally eat it out of the box with a glass of milk on the side.  I can’t drink coffee or tea without sugar;  and because I hate the taste of plain water, I add a few drops of lemon juice — which makes it too bitter, so I add (you guessed it) a spoon of brown sugar.

My only concession to health is that I’ve managed to eliminate white sugar from my diet altogether in favor of brown sugar, which tastes better, and I’ve only managed to reduce my total sugar intake by eliminating all sodas unless as occasional mixers in gin, rum etc.  I ration myself in the aforementioned tea and coffee by using only 1 teaspoon of sugar per 4ozs of liquid — ergo in a 12oz cup, I’ll add three spoons of brown sugar, and I never drink any quantity larger than 14ozs of anything.

And then we come to chocolate.

Or rather, let’s not come to chocolate, because in matters chocolate I can be so gluttonous that I can make myself sick just in the thinking of it.  If there’s a giant bar of white chocolate (e.g. Nestlé’s Milky Bar, my greatest weakness) I can eat the whole thing in a single sitting, and Cadbury’s Milk Chocolate and Rowntree’s Aero are almost as deadly.  I loathe Hershey Bar chocolate, by the way, because there’s too much cocoa (cacao?) in the formulation;  but when it comes to milk chocolate of the Cadbury’s ilk, I’m a goner.  You know how a leopard will encounter a flock of sheep, and kill and kill and kill until it’s exhausted, and only then carry off a single sheep to eat?  When it comes to chocolate, I’m the leopard and chocolate is the sheep — only I eat everything I kill.

My gastric band is powerless against chocolate because chocolate turns to liquid in the mouth and goes straight down.  It’s a wonder I don’t weigh 500lbs, and it is a testament to my willpower — which has taken me, oh, about thirty years to build up — that I can limit myself to the occasional (small) chocolate bar a month.

One of the few things which saves me is that I cannot abide certain things added to chocolate.  I speak here of nuts of any kind — which is strange because I quite like certain nuts like peanuts and cashews:  just not in my chocolate.  And because I don’t want to throw up all over my keyboard, we will not talk about coconut.  Other than those things, I don’t mind (okay, I love) soft centers, which is why Daughter (a sadist who makes De Sade look like an amateur) gives me for Christmas each year a box of custom-filled soft centers from See’s Candies.  Once again, it is a testament to my willpower that it can take me as long as three days to finish a box thereof because my natural inclination is to consume the entire contents on Christmas Day.  Before lunchtime.

Because I grew up in a British colony (South Africa), the chocolates we had were British, and this was especially true of the boxed chocolate assortments like Cadbury’s Roses and Mackintosh’s Quality Street.  The only thing that has ever stopped me from eating entire boxes and tins of either brand is that they contain landmines — the aforementioned nuts and coconut IEDs. 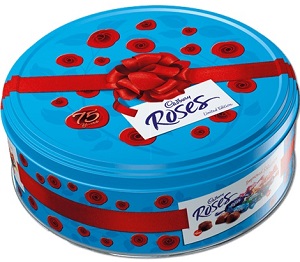 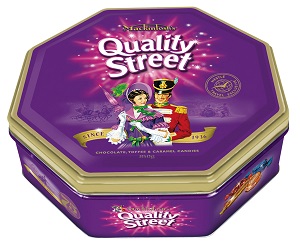 It’s a good thing that I no longer live there, and especially not in Britishland either, because retailer John Lewis has come up with the outstanding (!) idea that customers should be allowed to create their own assortments to fill a tin of Quality Street chocolates.

Quality Street chocolates are synonymous with Christmas but every year, the flavours that no-one likes always get left at the bottom of the tin.
Now John Lewis has found a way to ensure every treat will be eaten as shoppers will be able to create their own bespoke tins at pix and mix stations in selected UK stores from late September until December 23.
Customers will be able to choose only their favourite chocolates to fill up a 1.2kg tin, which means if you want a tub full of The Purple Ones and no Strawberry Delights, you can have it for £12.

That swooshing sound you may be hearing in your ears right now is the sound of me salivating.  OMG the thought of a Quality Street tin full of Strawberry Delight, Fudge, Orange Cream, Caramel Swirls and Milk Choc Blocks is so alluring, I can’t stand it. 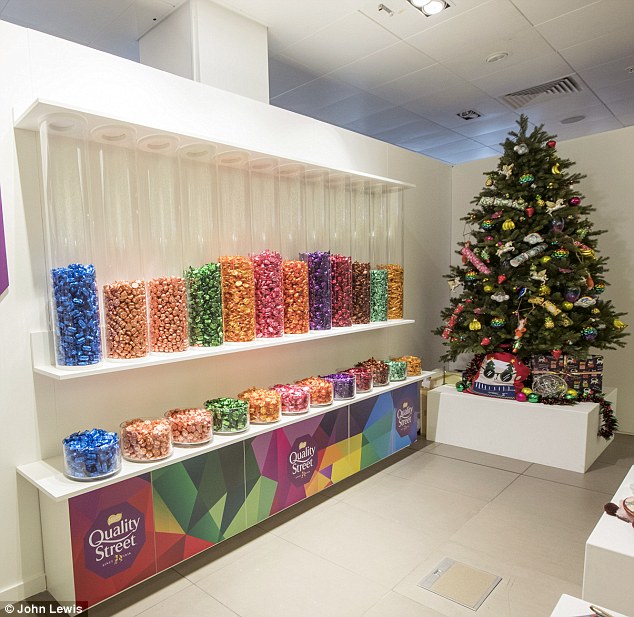 Thank goodness this Satanic Selection of Temptation is on the other side of The Pond, and will be of limited duration (pre-Christmas only when, this year, I will not be there).  And before any of my Brit Readers (and you know who you are) start hatching evil plans to send me any, I should point out that chocolate doesn’t travel well, especially through the mail.  Please don’t.  Let me just deal with the lack thereof in as manful a way as I can — i.e., with a few small sobs and lots of sighing — and a feeling of relief that I won’t die of Massive Chocolate Overload.

Not this year, anyway, unless Daughter buys me a large box of See’s.