So this little snippet arrived in my Inbox a while ago, sent on by Loyal Reader Max H., who asks, “Waddya think?”

The US Army’s PEO Soldier – Project Manager Soldier Weapons has issued an Request for Information (RFI) to obtain industry feedback on possible submissions to Sub Compact Weapons (SCW) evaluations. The specification details offered by the Project Manager Soldier Weapons (PMSW) are scant and extremely broad. Describing potential SCWs as being select fire weapons, chambered in 9x19mm and having MIL-STD 1913 rail (Picatinny Rail) space.
The RFI, published 2 May, makes no mention of physical dimensions such as size or weight and instead seeks to cast as wide a net as possible for potential submissions. It does, however, call for suppressors, spares and slings for the weapon (not holsters). Potential future SCW submissions will have to chamber ‘9×19 mm military grade’ ammunition – meaning both M882 ball and the new XM1153 Special Purpose 9mm Round from Winchester.
The RFI gives interested parties until the 18 May to submit their responses. It remains to be seen what purpose the SCW would serve and to whom it might be issued. If earlier Army references to a Sub Compact Weapon system are to be believed the new weapon is likely destined for rear echelon troops – in the traditional PDW / submachine gun role.

It starts when the new acronym SCW (Sub Compact Weapon) is used instead of the universally-known SMG (Sub-Machine Gun). (When did the .dotmil start this fucking bullshit? Never mind, I know the answer.)

People, this is not difficult. You take a simple, basic and easy-to-produce concept like the venerable M3 Grease Gun, add the doodads the Army wants, and away you go. Most of the serious firearms manufacturers like SIG, CZ or IMI could do this in their spare time, like over a couple weekends.

Why use the Grease Gun concept as the platform? Because it fucking works, as countless dead Nazis, Japs or Commies would tell you, if they could. With modern steel and production CNC machining, you could have a prototype put together in two weeks, and after a couple months of testing, into full production.

Which is kinda what the .dotmil did with the M3 (minus the CNC) back in the Big One, and it served until the 1990s when the .dotmil ditched it because OMG it wasn’t cool enough anymore. (That’s not the official reason, of course, but it’s the real one.)

Simplicity is just not gonna happen here, of course. What will emerge is some massively over-priced, over-engineered and over-complicated abortion which will be too heavy and too unreliable, because the current loose parameters of the RFI are going to be tightened and tightened until they cry for mercy, and the REMFs are going to get something which they’ll ditch in favor of their handguns at the first opportunity. Something like the HK MP7: 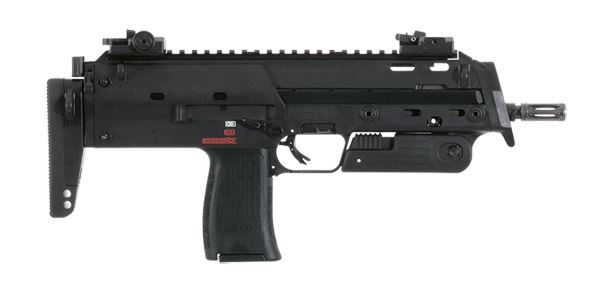 …which begs the question, “Why not just use the MP7?” (It sure as hell is ugly enough.) Of course, that would be just too simple. The .dotmil hates simple, which is why they got rid of the perfectly-capable M3 Grease Gun.

Also, the .dotmil would never adopt a foreign-made SMG with a simple operating mechanism — such as the MP7 or Kalashnikov’s KR-9 SBR (short-barreled rifle) — because OMG Russia, even though Kalashnikov USA is the same type pf corporation as Beretta USA (which supplied the .dotmil with the M-9 pistol, lest we forget).

And the KR-9’s operating system is simple — again that damning word — when we all know that the Pentagon will only consider whizzbang-gee-whizz-complicated guns because that’s how they’ve operated since WWII.

Never mind that everything the Pentagon wants is right there in that photograph, and ready to ship for testing tomorrow. But that would be too easy. Let’s rather take five years to reach a decision and end up with something that doesn’t work well, costs too much and will be in production only after a further five years. (The cost of the KR-9, in the quantities that the Pentagon would order, would be about $395 per piece. Unthinkable.)

And I haven’t even broached  the touchy subject of the .dotmil wanting to use the under-powered and pointless 9x19mm cartridge…

Just so we’re all clear on the concept: I’ve fired some of the “modern” SMGs myself, notably the Uzi, Skorpion, the MP5 and yes, the Grease Gun. Of all, the little Skorpion was the easiest to manage and the most reliable, probably because of its dinky lil’ cartridge. But neither the simpler Uzi or Skorpion designs will ever be used because old and made by furriners. Also, they just don’t look modern enough for today’s Army.