Over at Shooting Times, John Chapman has all this to say:

Modularity is both a blessing and a curse, and the Modern Sporting Rifle (MSR), also known as the AR-15, has it in spades. The plethora of rails, flashlights, lasers, optics, grips, pressure switches, flare launchers, vertical grips, muzzle brakes, flash hiders, hand stops and accessory mounts designed and produced for the AR-15 is simply mind-boggling—and has turned the MSR into a Lite Bright for bad ideas. The good news is the millions of dollars and man-hours spent in the pursuit of the MSR accessory market have produced some truly inspired designs, which have increased the platform’s effectiveness as a military, law enforcement, defensive and recreational tool.

He then goes on to outline all the accessorizing options, from the basic rifle:

…to a kitted-out version:

All this is well and good, and it’s a good article; but I have to tell you, something is nagging at me about it — and I think it happens right there in the first paragraph.

Look, I know we’re trying to defuse the Left’s obsession with the term “assault rifle”, but let’s be honest, ourselves: the AR-15 is not a “sporting” rifle outside perhaps the realm of 3-gun or smallbore competition. Sure, you can use it to hunt varmints (it’s mostly banned from deer hunting), and as recreation it’s super fun to pop away at the range (paper targets, metal poppers and so on). But once again, neither of these is the core purpose of the AR-15. When it comes to whacking critters, you can do a lot better with a heavy-barreled bolt-action rifle like this Cooper Arms beauty (in .223 Rem, even):

…and when it comes to semi-auto plinking, nothing beats a Ruger 10/22 or Marlin 60 — even with the low-low-low prices one currently finds .223 ammo selling for.

Most damning of all is that Chapman’s suggestions for accessorizing the AR-15 are geared pretty much towards one end only: self-defense / whacking goblins.

Now some of my Readers may suggest that goblin-whacking is a sport — I, for one, think it should be an Olympic event — but almost by definition it cannot be, simply because the occurrence isn’t predictable. You can’t say of a Saturday morning, “My ol’ buddy Cletus and I are going to sit inside his house tonight and whack a few goblins when they try to break in.” Not only is this most likely going to be a waste of time (except maybe on Chicago’s South Side, L.A.’s Compton and most of Baltimore), but some damn prosecutor is doubtless going to start flinging words like “entrapment” and “premeditation” all over the place (because these flunkeys have no sense of humor).

I don’t think that we should attempt to put the AR-15 round peg into a sporting-rifle square hole. In non-military/non-police (i.e. our) hands, the AR-15 is first and foremost a weapon of self-defense — and that’s nothing to be ashamed of. I don’t care about the gun-confiscators’ whining about “military” rifles, as though this is a disqualifier for civilian use (it isn’t). I don’t even care that these dickheads find the appearance of an AR-15 to be “frightening” or “threatening”; after all, my Constitutional freedoms are not dependent on how they make others feel.

I just think that we gun owners shouldn’t be ashamed of what the AR-15 is and what it represents. You can call it an assault rifle, or a military weapon or whatever scare term the hoplophobes come up with next. But calling the AR a sporting rifle is akin to calling a switchblade a Boy Scout knife. 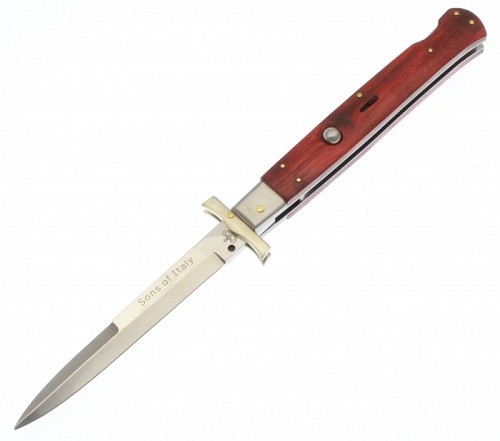 Sure, a Scout could use this Omerta “Sons of Italy” cutie for whittling and cutting ropes (if the modern-day Scouts even allow such things anymore [5,000-word rant deleted] ) but that’s not what a switchblade is, really. We all know what it is, and that’s my point.

I’m heartily sick of pussyfooting around with our language and terminology, trying to soften the impact of words to protect the feelings of the timorous, or to disguise the harsh realities of life. Things are what they are: the AR-15 and the AK-47 are assault rifles; Ruger 10/22s and Marlin 60s are plinkers; Savage 110s and CZ 550s are hunting rifles, and that’s it. You can use all the above rifles interchangeably between self-defense, hunting or plinking, with varying degrees of success / cost, but that’s just a lovely side-benefit.

In similar vein, the Colt 1911 Government pistol can be used in IPSC or IDPA competitions; but its original purpose was to kill bad guys (which it did and continues to do very well), and I don’t want to have to justify owning my 1911 by saying it’s a “sporting” handgun — not when I’m carrying it loaded with massive jacketed hollowpoints, it ain’t.

Gah. All this whining by the Left about the scawwwy AR-15 “weapon of mass destruction” is having a bad effect on me.

I don’t own a poodleshooter AR-15 because I already have an AK-47, thank you. But as the wailing from gun-fearing wussies intensifies, I might very well end up owning one soon. Because fuck ’em.

And if I do, it will all be Chuck Schumer’s fault. (How’s that for an example of Lefty-style blame deflection?)